If teachers are looking for civics-related material to keep their students engaged, look no further than the Bar Foundation’s civics blog, The Informed Citizen. Launched last year, the blog explains civics-related topics in plain language.

The posts can be read on any device or easily printed, creating the perfect student handout.

Here are the headlines so far this year:

Equal Justice Under Law—Is Everyone Included? – discusses the concept of equal access to justice.

Invoking the Ninth Amendment – explains what the framers of the Constitution meant when creating this amendment.

Meaning of American Flag Different for Everyone – covers the history of the American flag, including some misconceptions.

Is the Exclusionary Rule Still Relevant? – explains the origins of the exclusionary rule and how it has evolved.

And if you missed last year’s entries:

It Wasn’t Always a Party – explains the origins of political parties.

United States Hasn’t Always Had a “Right to Vote” – covers constitutional amendments that expanded the franchise.

Regular Order and the Art of Compromise – explains how Congress works.

Practicing the Art of Diplomacy – covers the importance of diplomacy around the World.

Rule of Law Applies to EVERYONE – explains what the rule of law is.

Constitutional Emoluments Clauses Guard Against Corruption – explains the genesis of these clauses and what it means today.

Serving at the Pleasure of the President – explains the purpose of the presidential cabinet. 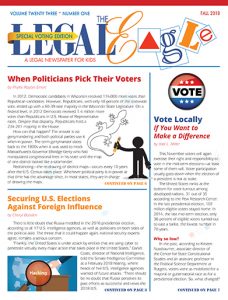 If you’re looking for more on civics, check out the fall 2018 issue of The Legal Eagle, the Foundation’s legal newspaper for kids. The issue is a Special Voting Edition and contains articles on partisan gerrymandering, Russian election meddling, the effort to repeal the Citizens United decision, the U.S. Supreme Court decision in the Ohio voter purge case, and the importance of voting in local elections.

In addition, the fall 2017 issue of The Legal Eagle was a Special Civics Edition and contained articles on the Electoral College, voter fraud, the importance of a free press and an independent judiciary. For more on voting rights, check out the fall 2016 issue of Respect, our diversity newsletter. The issue is a Special Voting Rights Edition and contains articles on the history of voting rights, voter ID laws, racial gerrymandering and restoring voting rights to felons.

All three editions (and all back issues) can be downloaded in pdf format from the Publication Page of our website. You can subscribe to Legal Eagle and Respect (both are published three times a year) with a digital or print subscription.

If you’re still hankering for more on civics, check out the New Jersey State Bar Foundation on social media. @NJStateBarFdn can be found on Facebook, Twitter and Instagram. Our feed features tons of civics-related posts that would complement any curriculum. Posts are added daily on all platforms.