Serving at the Pleasure of the President 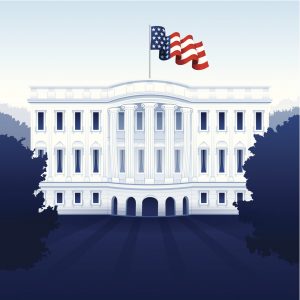 As you can imagine, running the country is a tough job, which is why presidents rely on members of their cabinet to advise them on difficult issues.

The U.S. Constitution never mentions the term “cabinet,” but Article II, Section 2 lays out the role of the president’s advisors allowing that he “may require the opinion, in writing, of the principal officer in each of the executive departments, upon any subject relating to the duties of their respective offices.” President George Washington would have regular meetings with his advisors and James Madison described the meetings as “the president’s cabinet.” The nickname stuck and to this day the president’s advisors are still referred to as his “cabinet.” The advisors hold the title of “Secretary” of whatever department they head, with the exception of the head of the Department of Justice, who holds the title of Attorney General.

The first presidential cabinet had only four departments. In addition to the Attorney General, President Washington’s cabinet consisted of the Secretaries of State, Treasury and War (now known as Defense). Today, the president’s cabinet contains the heads of 15 departments. With the exception of the vice president, who is also considered a member of the cabinet, all members “serve at the pleasure of the president,” meaning he can fire them at any time with no reason at all.

According to Kelly Dittmar, a political science professor at Rutgers University, the addition of cabinet positions “is reflected in both the growth and changes over time from administration to administration.” A president can elevate any position to his cabinet whenever he chooses.

“The standard positions are associated with leadership in major departments or agencies, which are created via congressional statute,” Professor Dittmar says. “Once the department or agency is formally established, the president elevates the leadership to cabinet or cabinet-level.”

The president nominates the heads or secretaries of each executive department. Those nominations are then sent to the U.S. Senate, which provides “advice and consent,” per the U.S. Constitution. Before the nominee is presented to the full Senate, however, he or she is first assessed by the relevant Senate committee.

For example, the Senate Foreign Relations Committee reviews the nominee for Secretary of State, since it is the Secretary of State’s job to serve as the president’s foreign affairs advisor, carrying out the president’s foreign policies through the U.S. State Department. Once cleared by the individual relevant Senate committee, the nominee is then presented to the full Senate for confirmation or rejection by a simple majority vote.

Cabinet members are rarely rejected. According to FiveThirtyEight, a polling aggregation website, “Only nine cabinet appointees in all of U.S. History—by new presidents plus ones attempting to fill vacancies in the middle of their terms—have ever been voted down by the Senate.” With more than 500 cabinet nominations considered by the Senate since 1789, according to the National Constitution Center, that’s a pretty low percentage.

Professor Dittmar, who is also affiliated with the Eagleton Institute of Politics, says that the amount of influence a particular cabinet member has on a president varies significantly depending on the administration.

“Ultimately, the president can guide the agenda and influence the direction of each executive agency, but he can also provide some autonomy to the secretaries in crafting goals and practices for their own agency,” Professor Dittmar says. “When secretaries come in with high levels of specialized expertise in the work of their agency, presidents look to them for guidance and information. In fact, their role as stated in the Constitution is to advise the president. However, this is not always the case, whether because the president selects individuals on other bases (not due to specialized expertise), or because the president seeks to keep his agenda and power contained in the White House.”

Professor Dittmar says, “The growth of the executive branch and the responsibilities it holds means that agency secretaries—and those that work for them—are essential for keeping track of governmental work that the president does not have the bandwidth to monitor on a daily basis.”

In other words, it’s a big country out there and it takes a lot of people to keep it running smoothly.

Discussion Questions
1. Would you ever want to be President of the United States? Why or why not? What do you think some of the biggest challenges are to being the president?
2. What does “to serve at the pleasure of the president” mean? Do you think this is a fair or unfair system? Explain your reasoning.
3. What is the process of assigning a secretary to an executive department? Does this detailed process change your thoughts on the concept of “serving at the pleasure of the president?”
4. After reading the article, where does the loyalty of the secretary lie? With the president? With the department they are representing? Or, with someone else?