Meaning of American Flag Different for Everyone 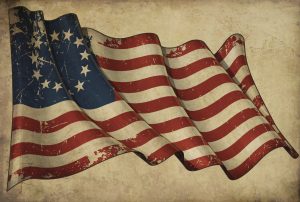 Known by many names—Stars & Stripes and Old Glory—the U.S. flag has become an iconic American symbol of patriotism. Some denounce its desecration while others see that act as the true test of freedom.

On June 14, 1777, the Second Continental Congress adopted the following resolution: “Resolved, That the flag of the United States be thirteen stripes, alternate red and white; that the union be thirteen stars, white in a blue field representing a new constellation.”

Obviously, the 13 stars and stripes signify the 13 colonies, but why red, white and blue? Some believe it comes from England’s Union Jack, which is also red, white and blue; however, in a report to Congress regarding the design of the Great Seal of the United States, Charles Thompson, secretary of the Continental Congress, reportedly said: “The colours are those used in the flag of the United States of America. White signifies purity and innocence, Red hardiness and valour and Blue…signifies vigilance, perseverance and justice.”

The flag was not always so revered. As a matter of fact citizens didn’t begin displaying it outside their homes until the 19th century, during the Civil War. Also, the story about Betsy Ross—probably not true.

History of the Flag

Let’s start with Betsy Ross. School children have long been taught that Betsy Ross designed and sewed the first American flag. While she was a flag maker working in Philadelphia at the time, there is no written documentation to back up the claim, only stories told by her family to the Historical Society of Philadelphia in the 1880s. The authenticity of the story came into doubt as early as 1908, but the myth had already been ingrained into the patriotic lexicon.

While some historians still accept the Betsy Ross story as fact, the majority believes that Francis Hopkinson, a signer of the Declaration of Independence, is really the person who designed the American flag. Hopkinson is also credited with designing the official Seal of New Jersey and contributing to the design of the Great Seal of the United States. As proof, Hopkinson submitted an itemized bill, in the amount of nine pounds for designing the “Naval Flag of the United States.” This is the only written documentation regarding the flag’s origin.

In the book, Flag: An American Biography, written by Marc Leepson, Edward W. Richardson, a noted colonial era flag expert, is quoted saying, “There are elements of the Betsy Ross story which simply are not supported by recorded history. The Betsy Ross family tradition probably became clouded with a number of embellishments and inaccuracies, which is a typical problem with most unrecorded and with some recorded history dependent on human memory and interpretation.”

By 1818, when the third Flag Act was adopted, the United States had grown to 20 states. Instead of adding another five stripes, it was decided that the flag would go back to the 13 stripes (imagine a flag with 50 stripes), representing the original 13 colonies and “on the admission of every new state into the Union, one star be added to the union of the flag.” To date, there have been 27 versions of the American flag.

According to one historian, Henry Moeller, who specializes in studying the usage of the flag during the Revolutionary War, the American flag was not created for patriotic purposes, but because “the Continental Congress needed a signal flag to communicate alarm.” In Flag: An American Biography, Moeller states: “The American flag as a sovereign flag did not occur until 1782. In the 1777 period, the flag was not a device that was used by the average citizen. It was used for communication.”

Pride in the American flag, historians agree, dates back to the beginning of the Civil War, not the Revolutionary War. Marc Leepson writes in Flag: An American Biography, “Before the Civil War—for the first three quarters of this nation’s history in fact—it was not customary for private individuals to fly the American flag. Until 1861, the flag was flown almost exclusively at federal facilities and by the American military, primarily on U.S. Navy ships.”

It seems that seeing (or hearing about) the American flag coming down at Fort Sumter, after Confederate forces fired on the Union’s garrison, had a profound effect on Northern Americans. The flag then became a symbol for the Union Army to keep fighting.

Whitney Smith, a leading expert on the American flag, contends that the Civil War was framed (at least in the North) as a fight for the flag. “The flag was everywhere. Every school flew a flag,” Smith states in Flag: An American Biography. “Union soldiers even carried miniature flags called Bible flags, small enough to fit in the Bible they would take with them to the battlefield. The start of the Civil War was the beginning of the sense we have today of the American flag as an everyday object and of something that belongs to everyone.”

With the American flag’s newfound popularity also came the rise of flag protection laws. The Flag Protection Movement started after the Civil War and the first bill to prevent “flag desecration” passed in the House of Representative in 1890. The measure was only meant to prevent the flag’s use in commercial advertising. It did not specifically mention physical destruction of the flag.

By the 1900s, the Flag Protection Movement had strengthened. In 1917, the National Conference of Commissioners on Uniform State Laws approved the following language for model Uniform Flag Law: “No person shall publicly mutilate, deface, defile, defy, trample upon, or by word or act cast contempt upon any such flag, standard, color, ensign or shield.” A handful of states adopted this exact language and by 1932 all states had some form of a flag desecration law on the books.

Protests against the Vietnam War, where demonstrators burned the American flag, would challenge these laws. One of the first demonstrations in New York’s Central Park on April 15, 1967, prompted Congress to pass the first federal flag desecration law in 1968. The law, signed by President Lyndon Johnson on July 4, 1968, made it illegal to “knowingly” cast “contempt” upon “any flag of the United States by publicly mutilating, defacing, defiling, burning or trampling upon it.” The consequences for conviction were fines of up to $1,000 and one year in jail.

Between 1969 and 1974, the U.S. Supreme Court found the state laws regarding flag desecration in New York, Massachusetts and Washington violated the First Amendment’s guarantee of free speech. Then, in 1989, with the case of Texas v. Johnson, the Court ruled specifically on flag burning. In a 5-4 decision, the Court held that burning the American flag is a symbolic form of free speech and is therefore protected by the First Amendment.

In the Court’s majority opinion, Justice William Brennan wrote: “To paraphrase Justice Holmes, we submit that nobody can suppose that this one gesture of an unknown man will change our Nation’s attitude towards its flag….The flag’s deservedly cherished place in our community will be strengthened, not weakened by our holding today.”

In response to the Court’s ruling, Congress passed the Flag Protection Act of 1989. In 1990, the Court ruled the Act was unconstitutional. Congress then proposed a constitutional amendment giving Congress and the states “the power to prohibit the physical desecration of the flag of the United States.” The amendment failed to rally the necessary two-thirds majority needed; however, it has been proposed again every year since 1995. It has passed the House of Representatives six times but has always lost in the Senate—in 2006 by just one vote. If the proposal can muster up enough federal support to send it to the states, there seems to be enough support at the state level for ratification.

Discussion Questions
1. Think about the story of Betsy Ross as outlined in the post. What stories have been passed down in your family’s history? Have those stories been embellished over the years? How?
2. Burning the flag is considered free speech even though no words are spoken. What other symbolic forms of speech can you think of?
3. Do you agree with the U.S. Supreme Court’s decision on flag burning? Why or why not?

Glossary Words:
ensign: pennant or flag.
garrison: military base or stronghold.
majority opinion: a statement written by a judge or justice that reflects the opinion reached by the majority of his or her colleagues.
ratification: signing or giving formal consent to a treaty, contract, agreement or constitutional amendment.
sovereign: autonomous or independent.