Is the Exclusionary Rule Still Relevant? 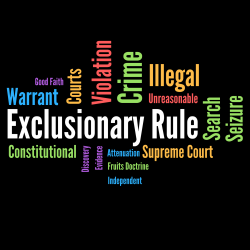 If you’ve ever watched an episode of Law & Order, you know that the police need a search warrant to enter your home. What you may not know is that was not always the case.

The Fourth Amendment to the U.S. Constitution states: “The right of the people to be secure in their persons, houses, papers, and effects, against unreasonable searches and seizures, shall not be violated, and no Warrants shall issue, but upon probable cause, supported by Oath or affirmation, and particularly describing the place to be searched, and the persons or things to be seized.”

Despite the Fourth Amendment, before the establishment in 1914 of a court-made rule called the exclusionary rule, any evidence obtained by law enforcement was admissible in a criminal trial if deemed relevant by the trial judge.

The exclusionary rule, which prohibits the use of illegally obtained evidence during a criminal trial, was established in 1914 with the U.S. Supreme Court’s decision in Weeks v. United States. The case involved Freemont Weeks, who was convicted of using the mail for the purpose of transporting lottery tickets, which is a violation of the federal criminal code. When Weeks was arrested at Union Station in Kansas City, police officers went to his house to search it. They did not have a search warrant, but a neighbor told them where Weeks kept a key. In two separate searches, both conducted without a warrant, law enforcement seized papers, letters and envelopes belonging to Weeks.

The illegally seized evidence was used against Weeks at trial and he was convicted. On appeal the U.S. Supreme Court unanimously held that the evidence was seized in an illegal search and therefore should have been barred at trial, giving birth to the exclusionary rule.

“The tendency of those who execute the criminal laws of the country to obtain convictions by means of unlawful searches and enforced confessions…should find no sanction in the judgment of the courts which are charged at all times with the support of the Constitution and to which people of all conditions have a right to appeal for the maintenance of such fundamental rights,” Justice William R. Day wrote in the Court’s majority opinion in Weeks. “If letters and private documents can thus be seized and held and used in evidence against a citizen accused of an offense, the protection of the Fourth Amendment declaring his right to be secured against such searches and seizures is of no value, and, so far as those thus placed are concerned, might as well be stricken from the Constitution. The efforts of the courts and their officials to bring the guilty to punishment, praiseworthy as they are, are not to be aided by the sacrifice of those great principles established by years of endeavor and suffering which have resulted in their embodiment in the fundamental law of the land.”

The exclusionary rule is meant to guard against misconduct by law enforcement officials, but does it make for a fairer justice system?

Stuart Green, a professor at Rutgers Law School—Newark, who teaches criminal procedure, says the exclusionary rule has many virtues, but whether it is “fair” is not clear.

“The rule is invoked only by defendants who seek to exclude presumably probative evidence. It does not come into play when an innocent person’s rights have been violated, since there is normally no evidence to exclude. Thus, those who tend to benefit most directly by the exclusionary rule are the guilty, rather than the innocent,” Professor Green explains. “Nevertheless, to the extent that the exclusionary rule is supposed to reduce police misconduct across the board, it should tend to benefit society as a whole, both those alleged to have committed crimes, and those not.”

In the 1920 U.S. Supreme Court case of Silverthorne Lumber Co. v. United States, the exclusionary rule was expanded to include the doctrine that would become known as “the fruit of the poisonous tree.” Essentially, the phrase means that if the “tree” is tainted, so is the “fruit.”

“In its most basic form, the exclusionary rule prohibits the introduction of evidence that was obtained in violation of the Fourth or Fifth Amendment,” Professor Green explains. “This evidence is referred to as the ‘poisonous tree.’ Under the fruits doctrine, evidence that was later obtained using knowledge gained through the original illegal search is also to be excluded, even if the subsequent search was itself conducted lawfully. The fruits doctrine is an important extension of the exclusionary rule. Without it, the police would have much less incentive to respect constitutional rights in the first place.”

An example of the fruit of the poisonous tree doctrine would be if the police conduct a search without a warrant and find stolen goods (the tree). Later, they confront the criminal and he or she confesses (the fruit). Since the search was illegal, the evidence found during that search is inadmissible and because of the “fruits doctrine,” the confession that resulted from the illegal search is also inadmissible because it is tainted by the poisonous tree.

Applied to the States

“Nothing can destroy a government more quickly than its failure to observe its own laws, or worse, its disregard of the charter of its own existence,” Justice Tom C. Clark wrote in Mapp.

Not everyone was a fan of the exclusionary rule. Judge Benjamin Cardozo, Chief Judge of the New York Court of Appeals famously said, “The criminal is to go free because the constable has blundered.” Some legal scholars claim that the text of the Fourth Amendment doesn’t specifically state that illegally obtained evidence must be excluded.

However, in a dissenting opinion for another Fourth Amendment case, Justice Louis Brandeis wrote, “Our Government is the potent, the omnipresent teacher. For good or for ill, it teaches the whole people by its example…If the Government becomes the lawbreaker, it breeds contempt for law; it invites every man to become a law unto himself; it invites anarchy.”

Over the years, the U.S. Supreme Court has carved out exceptions to the exclusionary rule and narrowed its focus. For example, the Court has made a “good faith” exception to the rule and allowed evidence obtained by a search warrant that law officers believed to be valid. The Court has also allowed evidence to be admitted that was improperly obtained if the connection between the evidence and the illegal means is remote. This is called the “attenuation doctrine.” In addition, the Court has allowed exceptions to the exclusionary rule when the illegally obtained evidence was later obtained by an independent person through legal means (independent source doctrine); and when it is apparent that improperly obtained evidence would have eventually come to light (inevitable discovery doctrine).

With all these exceptions, is the exclusionary rule still needed? Professor Green says the police today are better trained and more conscious of citizens’ rights than they were when the rule was created, so the rule may be less essential.

“On the other hand,” he says. “The Supreme Court’s tendency to construe the exclusionary rule more and more narrowly over time has undoubtedly tended to make the rule less effective as a deterrent than it once was.”

In general, Professor Green doesn’t think the exceptions carved out by the Supreme Court are valid.

Glossary Words:
attenuation: the reduction of force or effect.
appeal: a request that a higher court review the decision of a lower court.
probative: affording proof or evidence.