Practicing the Art of Diplomacy 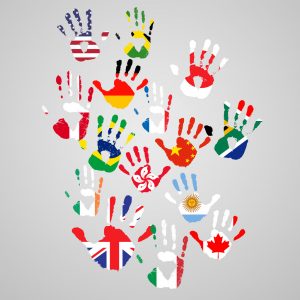 In international relations, military might is all well and good, but sometimes a softer touch is needed—that’s where the art of diplomacy comes in.

Benjamin Franklin is considered America’s first diplomat. In 1776, he was sent to France to help negotiate a treaty and to enlist France’s help in the war against Great Britain. It was in part due to his efforts in securing the support of the French that the colonies were able to prevail in the Revolutionary War.

In January 1781, Congress established the Department of Foreign Affairs. Critics of the department maintained that its duties were not clearly defined. With the new constitution, written in 1789, the department’s name was changed to the Department of State and its duties were defined as “the defense of the new nation and promoting its existence and independence.” In addition, the Department of State was delegated with negotiating the expansion of the United States. Through diplomacy, (negotiating with Spain, Mexico, Great Britain and Russia) from 1810 through 1867, the United States acquired the land that would eventually become the states of Louisiana, Mississippi, Alabama, Florida, Hawaii, Texas, Oregon, California, Arizona, New Mexico and Alaska.

During the Civil War, diplomacy proved important as well. U.S. diplomats negotiated with European powers, persuading them not to provide aid to the South. For instance, a British ship building company had built two war ships for the Confederacy. Due to diplomatic protests, those ships were never delivered.

To give you an idea of how important foreign affairs and the State Department are, the Secretary of State is the most senior position in the president’s cabinet and is fourth in line to take over should the president resign or die in office (after the vice president, the speaker of the house and the president pro tempore of the Senate). Secretaries of State are usually highly educated and six—Thomas Jefferson, James Buchanan, James Madison, James Monroe, John Quincy Adams and Martin Van Buren—have gone on to become President of the United States.

There are more than 13,000 men and women enlisted in the Foreign Service, which is under the umbrella of the Department of State. America’s highest-ranking diplomat is an ambassador, who is nominated by the President to represent the U.S. in a specific nation. The U.S. Senate then has to confirm the ambassador candidate. In general, countries that enjoy diplomatic relations with the U.S. have ambassadors.

According to Ruth Wedgwood, professor of International Law and Diplomacy at Johns Hopkins School of Advanced International Studies in Washington, D.C., an ambassador handles any issues that may arise between the U.S. and the country where he or she is stationed—that includes looking after the welfare of American nationals who may travel in or reside in that particular country. The ambassador may conduct negotiations and/or have private conversations to resolve any issues.

According to the United States Diplomacy Center, a museum dedicated to showing how diplomacy has shaped the nation’s history, the key pillars of American diplomacy are: peace, prosperity, democracy and economic development. While the mission of Department of State diplomats is to carry out the President’s foreign policy agenda, the Diplomacy Center contends “the peace, safety, and prosperity Americans enjoy are a direct result of the hard work of many skilled—and mostly unknown—professional diplomats.”

The Diplomacy Center refers to so-called “career diplomats,” who are on a lower level than an ambassador, but provide a great service to the U.S. On its website, the Diplomacy Center says: “The perception that diplomats only meet with government officials is false. Most of their work involves meeting with members and institutions of the business community and civil society as well as the media, academia and the artistic world to create links through common ideals and actions. While official discussions may bring about a trade agreement, conversations with social and commercial organizations can lead to assistance and exchange programs to promote, for example, better health care and the rights of women and minorities, while developing a more vocal and vibrant press, stronger social action programs, and greater educational and artistic exchanges.”

Who Gets an Embassy?

So, how is it determined whether the U.S. will have an embassy in any given country and what countries will have embassies in the U.S.?

According to Professor Wedgwood, the establishment of an embassy in a foreign country requires the consent of the host country, as well as the accreditation of the ambassador and other diplomats.

“The presence of an American ambassador is an important part of providing protection to Americans who live or work abroad, and facilitates informal and confidential conversations that can help to solve problems and avoid escalating misunderstandings,” she says.

Having an ambassadorial presence in any country, Professor Wedgwood says, can be the best way to establish a working relationship with another country.

“The finest ambassadors learn to use language with subtlety and finesse, intuit what solutions may be mutually acceptable, and understand the vagaries of human psychology,” Professor Wedgwood says. “It is a true art form, in which a skillful diplomat can make all the difference.”

Skilled diplomats can aid the United States in avoiding international incidents or in some cases all out war. Professor Wedgwood says the most notable example of this was the Cuban Missile Crisis in 1962.

During a tense 13-day standoff over the installation of nuclear-armed Soviet missiles on the island of Cuba (just 90 miles off the coast of Florida) diplomats worked to establish trust with their Soviet counterparts. Many believe this incident was the closest the Cold War ever came to escalating into a full-scale nuclear war.

“Clumsiness or hot-heads could easily have started a major war and even a nuclear exchange,” Professor Wedgwood says. “The key was to make sure that the Russians understood our position concerning their more provocative activities in the Western Hemisphere, while permitting Moscow to back away from actions that could have escalated into a disastrous nuclear catastrophe. Rhetoric and insight and experience can matter enormously in such circumstances.”

The importance of diplomacy and the difficult work of diplomats cannot be overstated, according to Professor Wedgwood.

“Over the course of a career, talented diplomats become skilled in the art of crafting mutually agreeable solutions to disputes,” she says. “They understand the importance of language and nuance, try to discern what is most important to their interlocutor, and try to read the attitudes of the leaders and citizens of the country that they wish to engage. It is a combination of timing, insight, nuance, and derring-do. Their explanations and suggestions are often directed as much to the citizens of a country as to government officials.”

Discussion Questions
1. What is diplomacy?  How can diplomacy benefit people in their personal lives?
2. Several examples of diplomacy are outlined in the post.  What other examples can you think of where diplomacy in foreign or domestic affairs could prevail?
3. Describe a situation where you or someone you know employed diplomacy to resolve a conflict or tense situation. How was the conflict resolved? How did you feel when it was resolved?
4. What traits does an ambassador need in order to do a good job?
5. Would you ever be interested in becoming an ambassador?  Why or why not?

Glossary Words:
accreditation: the process of officially recognizing someone as having a particular status. This word can also apply to institutions, such as a school or college. In this context it means that an institution has met all requirements for certification.
derring-do: daring or heroic deeds.
Cold War: the state of hostility that existed between the Soviet bloc countries and the United States and its allies. The period of the Cold War was essentially from 1945 to 1990.
interlocutor: a person who questions.
intuit: to know by intuition.
pro tempore: for the time
rhetoric: language designed to have a persuasive or impressive effect on its audience.
vagary: an unpredictable or erratic action.