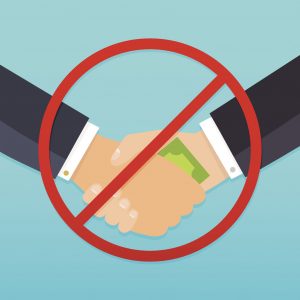 If you’ve been paying attention over the last year, a lot has been written and speculated about the U.S. Constitution’s emoluments clauses.

The word emolument derives from the Latin “emolumentum,” which translates to profit or gain. The dictionary defines an emolument as “the compensation, gain or profit arising from an office or employment.”

After suffering the tyranny at the hands of the British monarchy, the Founding Fathers understandably were concerned about corruption. To that end, there are actually two emoluments clauses outlined in the U.S. Constitution that guard against even the appearance of impropriety. The first, found in Article 1, Section 9, Clause 8 of the U.S. Constitution, covers foreign emoluments. The second, found in Article 2, Section 1, Clause 7 of the Constitution, covers domestic emoluments.

The Foreign Emoluments Clause states: “No Title of Nobility shall be granted by the United States; And no Person holding any Office of Profit or Trust under them, shall, without the Consent of Congress, accept of any present, Emolument, Office, or Title, of any kind whatever, from any King, Prince, or foreign State.”

Essentially the framers of the Constitution were concerned about the integrity of U.S. political institutions, especially from foreign influence.

“One of the weak sides of republics, among their numerous advantages, is that they afford too easy an inlet to foreign corruption,” Alexander Hamilton wrote in The Federalist No. 22.

Some kings and other foreign dignitaries were known to give expensive gifts to diplomats. Louis XVI of France, for example, gave Benjamin Franklin a diamond-encrusted snuff box. The gift was reported to Congress and he was allowed to keep it. In a presidential example, President Andrew Jackson was given a gold medal by a foreign government in 1833. President Jackson reported the gift to Congress and was not allowed to keep it.

In a post for the National Constitution Center’s blog, Constitution Daily, Lyle Denniston, a journalist who has covered the U.S. Supreme Court for 60 years, points out that adherence to the Emoluments Clause depends on the good faith of the federal official, meaning the obligation is on him or her to report any gift to Congress. “The Constitution places enormous trust in the occupant of the White House and, in doing so, expresses an aspiration that the trust will not be abused,” Denniston wrote.

The Domestic Emoluments Clause states: “The President shall, at stated Times, receive for his Services, a Compensation, which shall neither be increased nor diminished during the Period for which he shall have been elected, and he shall not receive within that Period any other Emolument from the United States, or any of them.” [“Any of them” refers to any one state.]

Gorod also explains that the Framers were concerned about state officials trying to play up to the President.

“The Framers may have been concerned about tariffs and other 18th century policies that could affect states differently, but the same general concern could apply to a host of additional policies today,” Gorod writes. “If Louisiana would rather a federal agency deposit nuclear waste in South Carolina, why not offer the President some personal benefit to curry favor? If the executive branch is helping to determine where a new plant and new jobs should be located, why not do the same?”

It is evident from the historic record of the Constitutional Convention, held in Philadelphia in 1787, that the Framers were obsessed with guarding against corruption.

George Mason, a delegate from Virginia, said, “If we do not provide against corruption, our government will soon be at an end.”

James Madison defeated a proposal that would have enabled the majority of state legislatures to remove the President from office. Madison argued, “It would open the door for intrigues [against] him in States where his administration might be unpopular, and might tempt him to pay court to particular States whose leading partisans he might fear, or wish to engage as his partisans.”

James Wilson, a delegate from Pennsylvania, noted that the President would represent “the whole union” and “in such a manner that he may be justly styled the man of the people. Being elected by the different parts of the United States, he will consider himself as not particularly interested for any one of them, but will watch over the whole with paternal care and affection.”

A number of lawsuits have been brought against President Donald J. Trump, claiming he is in violation of one or both of these constitutional provisions.

One suit, brought by Citizens for Responsibility and Ethics in Washington (CREW), Restaurant Opportunities Center United, as well as an event planner and a restaurant owner, was thrown out in December 2017. That suit alleged that the President was in violation of the Foreign Emoluments Clause because his hotels and restaurants do business with foreign governments.

In a 29-page opinion, Judge George B. Daniels ruled that the plaintiffs lacked standing in the case because they failed to show they had suffered harm from the business practices of the Trump organization. Judge Daniels also said it was up to the U.S. Congress to determine whether the President could accept emoluments.

In his opinion, Judge Daniels wrote, “As the only political branch with the power to consent to violations of the Foreign Emoluments Clause, Congress is the appropriate body to determine whether, and to what extent, Defendant’s conduct unlawfully infringes on that power.”

Two other lawsuits, one brought by the attorneys general of Maryland and the District of Columbia and one brought by 196 Democratic members of Congress, also allege that President Trump is in violation of the Constitution’s emoluments clauses.

The suit brought by the Democrats alleges conflicts of interest and claims that President Trump should “divest his financial interests and place them in a blind trust,” even though there is no law that forces him to do so.

The lawsuit brought by the attorneys general of Maryland and D.C. alleges that the President received financial favors from the government, which is unconstitutional. According to an article in The Washington Post, “It [the lawsuit] says the U.S. General Services Administration, which handles federal real estate, wrongly allowed Trump’s company to continue to lease the Old Post Office building, where Trump built his D.C. hotel, even though a clause in the contract said no elected official could remain on the lease….The suit also alleges that Trump is violating domestic emoluments by creating a situation in which states feel compelled to compete for Trump’s favor, perhaps by offering zoning exemptions, waivers or other benefits to help his business.”

Both of these lawsuits are still pending.

There is no precedent for an emoluments case, since neither the Foreign nor Domestic Emoluments Clauses have ever been litigated in court.

According to Nolan McCarty, a political science professor at Princeton University and the chair of its Department of Politics, Congress is the only avenue to disperse sanctions on a president.

“Impeachment or censure is a political issue, not a legal one,” Professor McCarty says.

As for using the little-known emoluments clauses in these lawsuits, Jay D. Wexler, a law professor at Boston University, told The New York Times that he’s seen parts of the Constitution, once thought to be irrelevant in modern times, take on new life and importance.

“The framers were prescient men who created a government that could withstand the worst of human foibles—corruption, vindictiveness, the thirst for tyranny—and wrote a Constitution to combat those foibles in many of their forms, not all of which will always be present, but which emerge in different guises in different eras,” Professor Wexler said.

Discussion Questions
1. What are some potential advantages or disadvantages of prohibiting a leader from personal “compensation, profit or gain” when they are serving in public office?
2. When you receive gifts, how do you feel towards the person who gave you the gift? Should American politicians of any sort be allowed to accept gifts from foreign countries? Why or why not?
3. Why is the Domestic Emoluments Clause so much clearer than the Foreign Emoluments Clause?  It states that under no circumstances is an elected official to receive gifts from the federal government or from any state. Why would this distinction have been made by the authors of the Constitution?
4. There has never been an emoluments case that has been litigated in court. Why do you think these little known clauses are coming to light now? What has changed in our political system?

Glossary Words:
divest: rid oneself of something that one no longer wants or requires, such as a business interest or investment.
partisans: citizens loyal to one party.
prescient: perceptive or insightful.
tyranny: power used in a cruel or unfair manner.