United States Hasn’t Always Had a “Right to Vote” 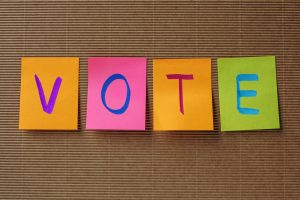 Next week voters will again make their way to the voting booth, with New Jersey voters poised to elect a new governor.

Today, every U.S. citizen over the age of 18 has the right to vote—that wasn’t always so. In fact, for the most part, when the country was first founded only white, male property owners had access to the franchise, in other words were eligible to vote. The discretion of who would be able to enjoy the franchise was left up to the individual states to decide, as there were no rules laid out in the U.S. Constitution. Some states allowed freed slaves to vote, while others let women vote.

Here’s a fun fact. New Jersey women actually had the right to vote when the country was first founded. The original New Jersey Constitution (1776) stated: “all inhabitants on this Colony, of full age, who are worth fifty pounds…shall be entitled to vote.” Because the requirement didn’t mention gender or race, women and freed slaves were allowed to vote (as long as they met the property requirement). A dispute between Newark and Elizabethtown over a courthouse in Essex County would change everything. Men on both sides of the dispute brought out women to cast ballots (in some cases illegally). In addition, men dressed up as women to cast ballots to boost their cause. This flagrant case of voter fraud led the New Jersey Legislature to adopt new voting laws in 1807, disenfranchising all but white males.

By the 1850s property ownership requirements had been relaxed and almost all white males were eligible to vote. While the “right to vote” was not mentioned in the original Constitution, it is, however, outlined in four amendments (15th, 19th, 24th & 26th). 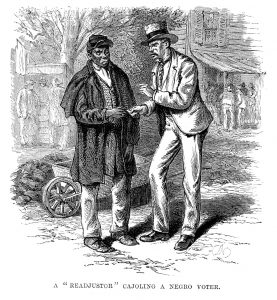 Ratified on February 3, 1870, the 15th Amendment to the U.S. Constitution states: “The right of citizens of the United States to vote shall not be denied or abridged by the United States or by any State on account of race, color, or previous condition of servitude.”

Members of the Women’s Suffrage Movement were devoted abolitionists and spoke out against slavery; however, some in the movement opposed the 15th Amendment, favoring universal suffrage, which would have included giving women the vote.

At the time, women suffragists claimed that they were entitled to the vote under the 14th Amendment’s promise of equal protection under the law, however, when the 15th Amendment was ratified, it did not include a protection for women. While Frederick Douglass, the famous African-American abolitionist, was an ardent supporter of women’s rights throughout his lifetime, he also believed that African American men shouldn’t have to wait to gain their suffrage just so that women could benefit as well.

“I must say I do not see how anyone can pretend that there is the same urgency in giving the ballot to woman as to the negro. With us, the matter is a question of life and death, at least, in fifteen States of the Union.” Douglass said in a speech. “When women, because they are women, are dragged from their homes and hung upon lampposts; when their children are torn from their arms and their brains dashed upon the pavement;…then they will have the urgency to obtain the ballot.”

While women would have to wait another 50 years to gain suffrage, for African-Americans (men and women) the promise of the 15th Amendment wouldn’t really be fulfilled until the passage of the Voting Rights Act of 1965. In addition, the benefits of the 14th Amendment would not truly be realized until the 1954 U.S. Supreme Court decision in Brown v. Board of Education. 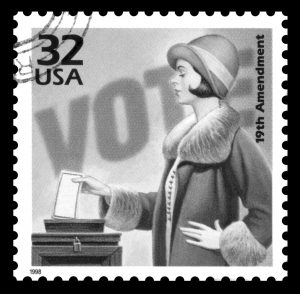 The divide on supporting the 15th Amendment caused a rift within the Women’s Suffrage Movement and it split into two separate organizations. The National American Woman Suffrage Association (NAWSA) was founded by Susan B. Anthony and led in 1900 by Carrie Chapman Catt. Alice Paul, a New Jersey native, led the more radical National Woman’s Party (NWP). NAWSA eventually won the support of President Woodrow Wilson to their cause, while the NWP routinely picketed outside the White House, with members, called the “Silent Sentinels,” often being arrested. When Paul was arrested in October 1917, she reportedly told the judge, “As members of the disenfranchised class, we do not recognize the court established by a police officer from whose election women were excluded. We do not admit the authority of the court, and we shall take no part in the court’s proceedings.”

The 19th Amendment, which mirrored the wording of the 15th Amendment, except for the words “on account of sex,” was ratified on August 18, 1920, giving more than 27 million women the right to vote.

The Poor and Poll Taxes

In his book, The Fight to Vote, Michael Waldman writes, “The poll tax was riveted into place starting in the 1890s as part of the disenfranchising laws and constitutions. By 1904 every ex-Confederate state had adopted it. The tax kept poor black and white citizens from voting. In 1900, when three-quarters of the population in those states had an average annual income of $55 to $64, the poll tax was typically a hefty $1.”

The 24th Amendment, ratified on January 23, 1964, stated that for federal elections, the right to vote “shall not be denied or abridged by the United States or any State by reason of failure to pay any poll tax or other tax.” The amendment only applied to federal elections (i.e., president, vice president, U.S. Senator and Representatives). States were still allowed to impose taxes at the local and state level.

Two years later, the U.S. Supreme Court in Harper v. Virginia Board of Elections would prohibit tax payment in all U.S. elections, not just federal elections. Ironically, the Court did not use the 24th Amendment to strike down the state poll taxes as unconstitutional. Instead, the Court ruled that the poll tax is a violation of the Equal Protection Clause outlined in the 14th Amendment. 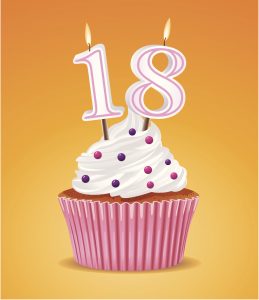 The last amendment to the U.S. Constitution that expanded the franchise was the 26th Amendment, which stated: “The right of citizens of the United States, who are eighteen years of age or older, to vote shall not be denied or abridged by the United States or by any State on account of age.”

Not everyone agreed. Some questioned the maturity and responsibility of those so young. In fact, in 1969, New Jersey voters defeated a state proposal to lower the voting age. However, the notion of “the bullet and the ballot go together,” popular during the Civil War era, was once again in the forefront and the 26th Amendment was ratified on July 1, 1971.

In terms of protecting voting rights, it is worth remembering how the franchise started to realize how far we’ve come and to maintain the resolve not to slip backward.

For more on voting amendments, read: The Consent of the Governed and the 17th Amendment

Discussion Questions
1. Do you think an increase in the number of voters makes a country more democratic? How?
2. How did the 15th Amendment change the lives of African American men?
3. How did the 19th Amendment change the lives of women?
4. What was the purpose of the poll tax? Today, some consider voter ID laws as a modern day poll tax. What are current voter ID laws? What do you think? Are they equivalent to a poll tax? Why or why not?
5. Some legislators have proposed lowering the voting age to 16. How do you feel about that? Would you be ready to vote at that age?

Glossary Words:
abolitionist: someone who opposes slavery.
disenfranchise: to deprive of a privilege or right.
franchise/suffrage: the right to vote.