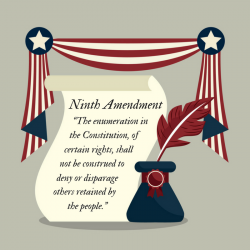 The meaning and importance of the Ninth Amendment has literally been debated since its inception when it was included in the Bill of Rights. The amendment states: “The enumeration in the Constitution, of certain rights, shall not be construed to deny or disparage others retained by the people.”

At issue was whether by outlining rights in the U.S. Constitution, it would be thought that those were the only rights protected. The Federalists contended that it would be impossible to list all the rights that U.S. citizens possessed and dangerous to list only some, fearing the government might attempt to limit liberties enjoyed by the citizenry. James Madison, the Father of the Constitution, who wrote all 10 amendments in the Bill of Rights, saw both sides of the issue.

In a letter to Thomas Jefferson, Madison wrote, “My own opinion has always been in favor of a bill of rights; provided it be so framed as not to imply powers not meant to be included in the enumeration…” When he presented his 12 proposed amendments (only 10 eventually got through) to Congress, he stated, “It has been objected against a bill of rights, that, by enumerating particular exceptions to the grant of power, it would disparage those rights which were not placed in that enumeration; and it might follow by implication, that those rights which were singled out, were intended to be assigned into the hands of the General Government, and were consequently insecure. This is one of the most plausible arguments I have ever heard against the admission of a bill of rights into this system; but, I conceive, that it may be guarded against.”

Some have determined that the guard Madison talked about was the Ninth Amendment. It was a compromise which suggests that the list of rights, enumerated in amendments one through eight, is not complete. During the debates over the Bill of Rights, the chief justice of the Virginia Supreme Court reportedly said, “May we not in the progress of things, discover some great and important [right], which we don’t now think of?”

Madison also suggested that it would be left to the court system to interpret the Bill of Rights as society evolved, calling the judiciary “the guardians of those rights; they will be an impenetrable bulwark against every assumption of power in the legislative or executive; they will be naturally led to resist every encroachment upon rights expressly stipulated for in the constitution by the declaration of rights.”

The courts did not consider a substantial Ninth Amendment case until 1965 when the U.S. Supreme Court decided the case of Griswold v. Connecticut. The case dealt with the constitutionality of Connecticut’s statute prohibiting the use of contraceptives, specifically by married couples. In a 7-2 decision, the Court ruled the statute was unconstitutional and violated the First, Third, Fourth, Fifth, Ninth and 14th Amendments to the U.S. Constitution.

According to The Know Your Bill of Rights Book, within 15 years of the Griswold decision, the Ninth Amendment was invoked in more than 1,200 lawsuits at the state and federal level. “Litigants found its [the Ninth Amendment] utter lack of specificity as to rights protected irresistible, and everyone from schoolboys to police officers relied upon it, seeking to void regulations that governed length of hair, to require the regulation of the purity of water and air, and to claim a right to legal marriage between two people of the same sex.”

Today, historians and legal scholars are still divided on the Ninth Amendment’s meaning.

“The Ninth Amendment was meant, at minimum, to protect residual rights not spelled out in the Constitution in order to limit government power,” says Jonathan Hafetz, a professor at Seton Hall Law School. “The Constitution was always meant to be a living document—one that evolves over time and is interpreted in light of changing norms. Its success is due to its flexibility and not to any orthodox rigidity or fixed construction.”

Laurence Tribe, a constitutional law scholar and Harvard Law School professor, wrote in American Constitutional Law, “It is a common error, but an error nonetheless, to talk of ‘ninth amendment rights.’ The ninth amendment is not a source of rights as such; it is simply a rule about how to read the Constitution.”

“While the high bar to amendments may minimize instability and uncertainty, it also places greater stress on other avenues of constitutional change, such as the courts,” he says. “In light of the nation’s increasing polarization, I anticipate growing pressure to amend the Constitution.”

At the same time, Professor Hafetz recognizes that same polarization will make amending the Constitution even more difficult.

Discussion Questions
1. What do you think the ninth amendment means? “The enumeration in the Constitution, of certain rights, shall not be construed to deny or disparage others retained by the people.”
2. What are the rights listed in the Bill of Rights? Which rights do you agree or disagree with? Why?
3. Are there any rights that you believe are missing from the Bill of Rights?  Explain your reasoning.
4. Think of a right not outlined in the U.S. Constitution. Would the Ninth Amendment uphold that right as constitutional? Why or why not?

Glossary Words:
concurring opinion: a separate opinion delivered by one or more justices or judges that agrees with the decision of the court but not for the same reasons.
enumeration: the action of mentioning a number of things one by one.
polarization: the division into two sharply contrasting groups or sets of opinions.