It Wasn’t Always a Party 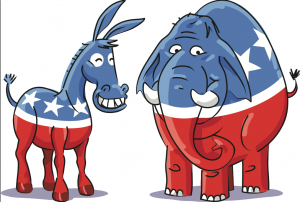 Everyone probably knows there are two political parties in the United States today—Democrats and Republicans. It wasn’t always that way, though.

There is no mention of political parties in the U.S. Constitution. In fact, until President George Washington left office in 1796, there were none—at least not formally. The two-party system as we know it today didn’t come into play until after the Civil War in 1869.

According to Professor Nolan McCarty, the Department of Politics Chair at Princeton University, there were factions in the political arena prior to Washington’s departure but not in the same organized way we think of political parties today.

Washington Bids Farewell with a Warning

In his Farewell Address, President George Washington warned about the rise of political parties.

“The alternate domination of one faction over another, sharpened by the spirit of revenge, natural to party dissension, which in different ages and countries has perpetrated the most horrid enormities, is itself a frightful despotism. But this leads at length to a more formal and permanent despotism. The disorders and miseries which result gradually incline the minds of men to seek security and repose in the absolute power of an individual; and sooner or later the chief of some prevailing faction, more able or more fortunate than his competitors, turns this disposition to the purposes of his own elevation, on the ruins of public liberty,” President Washington said.

The former president went on to say, “There is an opinion that parties in free countries are useful checks upon the administration of the government and serve to keep alive the spirit of liberty. This within certain limits is probably true; and in governments of a monarchical cast, patriotism may look with indulgence, if not with favor, upon the spirit of party. But in those of the popular character, in governments purely elective, it is a spirit not to be encouraged. From their natural tendency, it is certain there will always be enough of that spirit for every salutary purpose. And there being constant danger of excess, the effort ought to be by force of public opinion, to mitigate and assuage it. A fire not to be quenched, it demands a uniform vigilance to prevent its bursting into a flame, lest, instead of warming, it should consume.”

In addition, President John Adams said, “There is nothing which I dread so much as a division of the republic into two great parties, each arranged under its leader, and concerting measures in opposition to each other. This, in my humble apprehension, is to be dreaded as the greatest political evil under our Constitution.”

Thomas Jefferson, on the other hand, favored political parties. “Men are naturally divided into two parties,” Jefferson wrote, “those who fear and distrust the people and with to draw all power from them into the hands of the higher classes and those who identify themselves with the people, have confidence in them, cherish and consider them as the most honest and safe, although not the most wise, depository of the public interest.”

So How Did We Get Here?

While Founding Fathers James Madison and Alexander Hamilton, writing in The Federalist Papers, were also against “factions” or parties, they are credited with establishing the two-party system. Professor McCarty says they thought parties would be divisive and ultimately lead to tyrannical outcomes, possibly destroying the Republic. Ultimately, he says, they came around and realized there was a “natural tendency toward factions.” Professor McCarty likens this natural tendency to the reality show Survivor, where everyone would be out for themselves if not for political parties.

As part of the Reconstruction Amendments to the U.S. Constitution, the 15th Amendment passed, which gave African-American men the right to vote. Many African-American men would register as Republicans after its ratification in 1870. However, it is interesting to note (and also a testament to the evolving nature of political parties and ideologies) that today minorities don’t make up a large number of registered Republicans.

The Founding Fathers, Professor McCarty says, realized, just like in Survivor, coalitions were necessary to get things done and understood if they “didn’t collaborate with politicians of similar views, they would be in jeopardy.”

“It’s really about how to organize politics. In a democracy you need a contested election with choices,” Professor McCarty says. “Building coalitions to pass legislation and mobilizing voters—these are the democratic functions that political parties play,” he says.

Is There a Third Option?

There are more than 200 million registered voters in the United States. According to a recent Gallup poll, 25 percent of voters are Republican, 28 percent are Democrat and 45 percent are considered Independents, meaning not affiliated with either party.

In addition to Democrats and Republicans, American voters do have other choices in third-party candidates. For instance, the Libertarian Party, founded in 1971, has more than 500,000 registered voters. At its core, the Libertarian Party believes in a reduced federal government, separation of church and state, de-regulation, free trade and remaining neutral in foreign relations. The Green Party, which has a little over 300,000 registered members and gained popularity in the 1980s, has a platform that emphasizes environmentalism, social justice and peace. Green Party candidates are mostly elected at the local level and don’t have a strong national presence.

Professor McCarty says it is “very hard for a third party to replicate what the Democrats and Republicans have.” He says that while the “ideologies of the two parties may change over time,” the U.S. will always be governed by these two parties.

Glossary Words:
despotism: the exercise of absolute power in an oppressive way.
monarchical: relating to a monarchy, which is a nation ruled by a king, queen or emperor.
tyrannical: exercising power in a cruel or arbitrary way.