Regular Order and the Art of Compromise 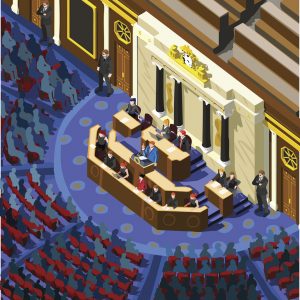 Negotiation and compromise, once keys to the legislative process, seem to be lacking in today’s Congress. Many view the legislative branch in Washington, DC as hopelessly partisan, accomplishing very little.

In a speech from the Senate floor during the health care debate, Arizona Senator John McCain made a plea to his colleagues for civility and a return to “regular order.”

“Let’s trust each other. Let’s return to regular order,” Senator McCain said. “We’ve been spinning our wheels on too many important issues because we keep trying to find a way to win without help from across the aisle. That’s an approach that’s been employed by both sides, mandating legislation from the top down, without any support from the other side, with all the parliamentary maneuvers that requires.”

So, what is regular order?

Nolan McCarty, a political science professor at Princeton University and the chair of its Department of Politics, explains that when Senator McCain refers to returning to “regular order” what he means is embracing the committee system, which more and more is being subverted today.

Normally what happens in the legislative process, Professor McCarty says, is that a bill is proposed in the House or Senate and then the leadership of that body assigns it to a relevant committee or subcommittee for review. For example, a bill dealing with farm subsidies would be referred to the Agriculture Committee.

Normally, hearings would be held and testimony heard by the relevant committee. Then there is a period of “mark-up” where the bill is amended or re-written by the committee prior to bringing it to the floor. The legislation is then debated on the floor of the House or Senate. The process can take many months. Standard procedure or regular order allows for back and forth until a bill emerges that both sides can support.

A bill may be introduced at any time during a congressional session, however, it must be passed during that same session or it is considered to have “died in committee.” The measure won’t be considered again unless it is re-introduced and then the process starts all over again. Approximately 90 percent of bills die in committee.

In an op-ed for The Washington Post, Senator McCain wrote, “Our entire system of government—with its checks and balances, its bicameral Congress, its protections of the rights of the minority—was designed for compromise. It seldom works smoothly or speedily. It was never expected to.”

“I argued during the health care debate for a return to regular order, letting committees of jurisdiction do the principal work of crafting legislation and letting the full Senate debate and amend their efforts.”

Professor McCarty points out that regular order or the committee system is not a device from the Founding Fathers and is not mentioned in the U.S. Constitution. It is a creation of Congress and evolved over time. According to Professor McCarty, with the exception of a few ad hoc committees, in the earliest Congresses there were no committees. It wasn’t until the early 1800s that standing committees were established and the modern committee process evolved from the Legislative Reorganization Act of 1946.

The first House and Senate committees were established in 1789 to draw up the rules and procedures of each chamber of Congress. It wasn’t until 1816 that the Senate adopted a formal committee system with 11 standing committees consisting of five members each. Three of those initial committees—Finance, Foreign Relations and Judiciary—are still in existence today. According to the Senate Historical Office, by 1920, the Congressional Directory listed nearly 80 committees, including one called the “Committee on the Disposition of Useless Papers in the Executive Departments.”

The first House committee—the Committee on Ways and Means, established on July 24, 1789—was only supposed to exist for two months. It would become a standing committee in 1801 and still exists today.

There are three types of congressional committees—standing, select and joint. Standing committees are permanent and consider bills, recommending measures to whichever chamber (House or Senate) it belongs. Select committees (also known as special committees) are usually established via a resolution and can be temporary or permanent. This type of committee could, for example, study a particular issue or perhaps conduct an investigation in a particular matter. These types of committees also sometimes consider evolving issues that don’t distinctly fit within the jurisdiction of a standing committee. Finally, joint committees are permanent panels that include members of both the House and Senate. These committees generally perform housekeeping tasks and do not consider legislation.

Before the Legislative Reorganization Act of 1946, the House of Representatives had 48 committees and the U.S. Senate maintained 33. Currently, Congress maintains 20 permanent committees in the House and 21 in the Senate, as well as four joint committees.

So, why has Congress moved away from regular order and the committee system? Political science professors Sarah Binder, of George Washington University, and Frances Lee, of the University of Maryland, blame partisanship.

In the book Negotiating Agreement in Politics, Professors Binder and Lee write: “The rise of partisanship, however, has weakened congressional committees and contributed to the breakdown of ‘regular order.’ For example, the Senate Finance panel’s slow start in 2013 in getting tax reform off the ground testifies to the difficulties that committee leaders now face in tackling policy challenges without the support of party leaders. Lawmakers often resort to ad hoc or ‘unorthodox’ procedures to achieve major deals in the contemporary context.…Ad hoc arrangements sacrifice many of the negotiating advantages afforded by long-standing repeated interactions, but they are sometimes the only pathways to success under contemporary conditions.”

In the chapter titled, “Making Deals in Congress,” the writers cite Olympia Snow, a former Republican senator from Maine, who said: “Congress is becoming more like a parliamentary system where everyone simply votes with their party and those in charge employ every possible tactic to block the other side.”

According to the website, USHistory.org, “Some modern critics believe that the [committee] system is arcane and simply too slow for a fast-paced country like the United States. A process in which only a few people were responsible for making laws certainly would be more efficient. But of course it wouldn’t be very democratic. The many hurdles that bills must face help to ensure that those that survive are not just passed on a whim, but are well considered and deliberate.”

As Senator McCain wrote in his op-ed, “We might not like the compromises regular order requires, but we can and must live with them if we are to find real and lasting solutions. And all of us in Congress have the duty, in this sharply polarized atmosphere, to defend the necessity of compromise before the American public.”

Discussion Questions
1. Some people say that if there is true compromise, everyone is equally upset.  What do you think of this idea? When compromise happens, can anyone win?  Explain.
2. Do you think the United States’ system of checks and balances makes our government work too slowly? Why or why not?
3. Reread the post’s subhead Less Efficient, More Democratic. Do you think that passing more legislation would be worth sacrificing the principles of democracy and regular order? Why or why not?
4. Think of a time when you compromised. How did it make you feel? How was the situation resolved?

Glossary Words:
ad hoc: formed for a particular purpose
bicameral: a legislative body that has two branches or chambers.
partisan: loyal to one party or cause.