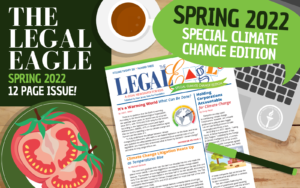 The spring 2022 edition of The Legal Eagle is now available. The Legal Eagle’s spring issue is a super-sized 12-page issue devoted to climate change issues. The Special Climate Change Edition contains articles on legislation, litigation, corporations’ role in combatting the problem and the climate change education standard in New Jersey. A PDF of The special issue can be downloaded or individual articles can be read and printed out from The Legal Eagle’s blog, The Lowdown.

Any questions, contact the editor of The Legal Eagle, Jodi L. Miller. She can be reached via email at [email protected].

Here are the headlines from the spring 2022 issue:

It’s a Warming World—What Can Be Done?

There is no question that the Earth is warming. According to the World Meteorological Organization, the warmest seven years on record have all occurred since 2015, with 2016 and 2020 tying for the hottest. According to the National Aeronautics and Space Administration (NASA), 97% of climate scientists agree that the Earth’s warming is due to climate change and humans are the cause of it.  READ MORE

The mercury’s gradual climb over the last four decades has not only made the planet hotter overall, it also has triggered an increase in climate change-related lawsuits. The number of such legal actions rose steadily throughout the late 20th and early 21st centuries but skyrocketed in the latter half of the last decade, according to data from the Sabin Center for Climate Change Law at Columbia University. The 736 complaints filed between 2015 and 2020 accounted for more than half of the total cases lodged since 1986. READ MORE

Everyone can play a part in combatting climate change. Corporations, however, are uniquely positioned to play an even bigger role and are facing pressure to take meaningful and timely action. READ MORE

When Egg Harbor Township High School science teacher Jim House began teaching environmental science 12 years ago, his class was one that students often took just to get another science credit. Today, teaching about environmental issues has become much more important. In 2020, the New Jersey State Board of Education approved first-in-the-nation standards requiring schools to teach climate change in a wide range of subjects in all grades. READ MORE

If you would like to be notified when new issues of The Legal Eagle have been published, sign up for a digital subscription. If you would like a FREE print subscription, you can subscribe using our Publication Order Form. You’ll be sent the last published issue and when new issues are printed, you’ll receive those as well. Please order as many as you need for your students.