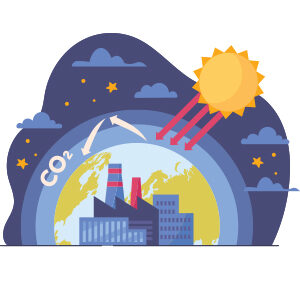 Everyone can play a part in combatting climate change. Corporations, however, are uniquely positioned to play an even bigger role and are facing pressure to take meaningful and timely action.

According to a 2021 report, “Taking Stock: A Global Assessment of Net Zero Targets,” published by the Energy & Climate Intelligence Unit, a London-based nonprofit, 21% of the world’s 2,000 largest public companies agreed to net zero emission targets, but many of these companies did not include the most substantial and difficult to address Scope 3 emissions.

Achieving net zero emissions is an essential yet challenging goal for corporations. To achieve net zero, according to the Natural Resources Defense Council (NRDC), a nonprofit based in New York that advocates for polices supporting the environment, corporations need to include emissions associated with the entire life cycle of a product.

Greenhouse gas emissions consist of three categories or scopes: Scope 1 refers to emissions directly produced by a company or corporation, such as what is used to power a facility or vehicle. Scope 2 emissions are indirect emissions produced by a third-party that the company buys energy from. Scope 3 emissions come from a product’s use and eventual disposal.

“Failing to account for or address these [Scope 3] emissions means that the vast majority of greenhouse gases attributable to corporations and their products are falling outside of well-publicized corporate climate commitments,” according to the NRDC.

A February 2022 report titled, “Corporate Climate Responsibility Monitor 2022: Assessing the Transparency and Integrity of Companies’ Emission Reduction and Net Zero Targets,” was published by the NewClimate Institute, a non-profit organization based in Germany that tracks and evaluates corporate climate change mitigation, and Carbon Market Watch, a not-for-profit association that advocates for fair and effective climate protection. The report evaluated the climate pledges of 25 of the largest worldwide companies, including Google, Apple, Amazon, CVS and Nestle. These companies account for 5% of greenhouse gas emissions worldwide.

Nestle, which received a “very low integrity” rating in the report, mainly for the lack of detail in its reduction plan, told BBCNews, “We welcome scrutiny of our actions and commitments on climate change. However, the NewClimate Institute’s CCRM report lacks understanding of our approach…” Nestle also contends that the CCRM report contains significant inaccuracies.

The report maintains that successfully mitigating climate change will depend on the innovation of corporations to find solutions.

“The findings of this report indicate that regulators should not rely on consumer and shareholder pressure to drive corporate action,” the report states. “Companies must be subject to intense scrutiny to confirm whether their pledges and claims are credible and should be made accountable in the case that they are not.”

Lucas Joppa, Microsoft’s chief environmental officer, agreed and told The New York Times, “If we are going to achieve a net zero carbon economy for real, we will need everyone to act. And that means action can’t be voluntary. We need requirements and standards that everyone is expected to meet.”

Going ‘green’ with the Green Monster

While things might seem grim, it’s not all bad news on the corporation front. On March 30, 2022, the Boston Red Sox announced that it would be teaming up with Aspiration, a global leader in sustainability, to neutralize the organization’s carbon footprint, including by fans who attend the games at Fenway Park.

The Red Sox will donate a portion of the sale of every ticket to the Aspiration Planet Protection Fund to purchase verified carbon credits. These credits, which offset the direct and indirect impacts of Fenway’s operations, such as water usage and electricity, also address the ballpark’s Scope 3 emissions. The surcharge on the ticket, which the Red Sox say will be absorbed by the club and not passed on to fans, will go to support programs designed to reduce emissions and invest in renewable energy.

This comes on top of a 2007 initiative that the Red Sox executed with NRDC. In that endeavor, the Red Sox installed solar panels and implemented a recycling initiative at Fenway.

“The home of the Green Monster is becoming the home to ‘green’ progress,” said Andrei Cherny, CEO and co-founder of Aspiration. “We’re honored to partner with the Red Sox in this effort to bring easy, automated climate impact to every fan that walks into Fenway Park and are excited to set a new standard for climate accountability in sports.” Aspiration also works with the Los Angeles Clippers.

The need for more regulation was one of the key takeaways from the CCRM report. In addition, according to investment firms, investors are interested in a company’s ESG (environmental, social and governance) rating, which evaluates how a company stacks up in these areas.

In March 2022, the Securities and Exchange Commission (SEC), a federal agency charged with protecting American investors by enforcing federal securities laws, addressed this issue by approving a proposal requiring all publicly traded companies to disclose their greenhouse gas emissions and the risks the company faces due to climate change.

“Shareholders of public companies are increasingly demanding more information about the risks that climate change could pose to their investments, arguing that mounting climate disaster and environmental regulations could limit the growth of businesses that do not prepare for them,” The Washington Post reported.

For instance, a company that contributes heavily to global warming may be a bad investment bet if it turns off consumers and decreases that company’s bottom line. In addition, the forced transparency would hold companies accountable for their contributions to climate change.

“It will make it possible for stakeholders, including shareholders, to then push companies to take real action,” Bill Weihl, a former green energy czar at Google, told The New York Times about the SEC rule.

The public has 60 days to comment on the proposed rule after the full text is published on the SEC’s website. The SEC will take those comments into consideration before issuing a final rule, which, in its current draft, would phase in requirements over a few years, with the largest companies having to make disclosures beginning in 2023. Smaller companies would have until 2024. Larger companies would also be required to divulge their Scope 3 emissions.

There is little doubt among legal scholars that the new rule will likely face legal challenges. A legal battle could postpone the rule’s implementation as it winds its way through the court system.

“West Virginia and other states will vigorously participate in the rulemaking process, and, if necessary, go to court to defend against any regulatory overreach by the SEC in the name of climate disclosures,” West Virginia Attorney General Patrick Morrisey said in a statement after the rule was announced.

Last year Morrisey sent the SEC a letter advising that the rule was unconstitutional and would not hold up to “strict scrutiny,” which states that laws and regulations must meet a “compelling government interest.”

According to reporting by The Washington Post, “Business groups may also challenge whether the SEC has the authority to wade into environmental issues.” Kathleen Sganna, President of Western Energy Alliance, a trade association for the oil and gas industry, told The Washington Post that climate risks are “difficult to predict” so they are not “material concerns for today’s investors and therefore not something that the SEC has a mandate to regulate.”

Mary Schapiro, a former SEC chair, told The Washington Post, “Europe in particular has been far ahead because climate issues there were accepted as real financial risks long before that became really accepted in the U.S.” She also reported that Brazil, Hong Kong, New Zealand, Singapore and Switzerland already require this type of climate risk reporting.

Glossary Words
mitigate – make less severe.
strict scrutiny—the highest standard of judicial review that a court will use to evaluate the constitutionality of governmental discrimination.

This article originally appeared in the spring 2022 issue of The Legal Eagle, Special Climate Change Edition. 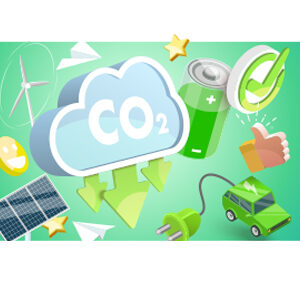 According to research released in 2017 by the Carbon Disclosure Project (CDP), a not-for-profit charity based in London, 100 fossil fuel companies, including ExxonMobil, Shell and Chevron, have been responsible for 71% of industrial greenhouse gas emissions worldwide since 1988. Thirty-two percent of those emissions come from investor-owned companies.

In the past, many university endowment portfolios have included investments in the fossil fuel industry. After ongoing protests from students, faculty and other advocates, many universities have changed course and made a commitment not to invest financially in fossil fuels.

At Princeton University, the student-led organization Divest Princeton, submitted a divestment proposal to the university’s Board of Trustees in February 2020. According to The Daily Princetonian, 82% of undergraduates at Princeton voted in favor of divestment. In June 2021, Princeton University announced that it would “conditionally divest from certain elements of the fossil fuel industry.”

According to Global Fossil Fuel Divestment Commitment Database, which is maintained by two nonprofit divestiture advocacy groups, more than 60 educational institutions, including Cornell University, Boston University and Columbia University, have either full divested or partially divested from the fossil fuel industry.

The longest battle to divest has taken place on the Harvard University campus. Activist groups such as Divest Harvard have been pushing for the university to divest the institution’s nearly $52 billion endowment, the largest of any university, from the fossil fuel industry for nearly a decade. Students and alumni organized protests on campus, took legal action in the courts and even stormed the field at a Harvard-Yale football game in 2019 to bring attention to the issue.

The student organization’s complaint stated: “The final overarching requirement, loyalty, is the legal duty to act in the best interests of the institution as a whole—one undermined by various fossil fuel conflicts of interest. Several of Harvard’s trustees have or had significant ties to the industry.”

In September 2021, Harvard announced its plans to divest. It is estimated that Harvard’s fossil fuel holdings are approximately $838 million. According to the Global Fossil Fuel Divestment Commitment Database, as of October 2021 more than 1500 institutions, including colleges and universities, philanthropies, faith-based organizations and pension funds, had divested $40 trillion from the fossil fuel industry.

Glossary Words
divest—to get rid of something that is no longer wanted, such as a business interest.
endowment—a combination of assets invested by a college/university to support its educational endeavors.