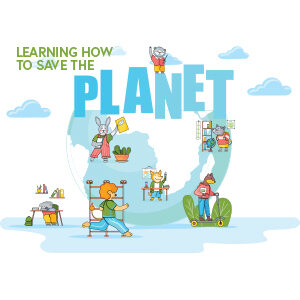 When Egg Harbor Township High School science teacher Jim House began teaching environmental science 12 years ago, his class was one that students often took just to get another science credit. Today, teaching about environmental issues has become much more important. In 2020, the New Jersey State Board of Education approved first-in-the-nation standards requiring schools to teach climate change in a wide range of subjects in all grades.

In the fall of 2021, schools throughout the state began teaching from the new version of the New Jersey State Learning Standards (NJSLS), which require that the topic of climate change be incorporated into 7 of 9 subjects taught in the state. Those subjects are: Career Readiness, Life Literacies and Key Skills; Comprehensive Health and Physical Education; Computer Science & Design Thinking; Science; Social Studies; Visual and Performing Arts; and World Languages.

The other two subjects—English Language Arts and Mathematics—were not up for review in 2020. Revised standards should be adopted for these subjects in 2022 and will include climate change components.

“In New Jersey, we have already begun to experience the effects of climate change, from our disappearing shorelines to harmful algae blooms in our lakes, super storms producing torrential rain, and summers that are blazing hot,” Murphy said in a statement when the new standards were adopted. “The adoption of these standards is much more than an added educational requirement; it is a symbol of a partnership between generations. This generation of students will feel the effects of climate change more than any other, and it is critical that every student is provided an opportunity to study and understand the climate crisis through a comprehensive, interdisciplinary lens.”

Kristen Hargis is a doctoral student at the University of Saskatchewan in Canada, as well as a research associate at the Monitoring and Evaluating Climate Communication and Education Project (MECCE). Her work includes a survey of K-12 educational standards from all U.S. states and the District of Columbia by MECCE and the North American Association for Environmental Education (NAAEE). The results of the survey are expected to be published in the next few months.

Hargis says research indicates the subject matter of climate change education should go beyond just teaching about environmental issues in science classes and should include social and economic issues as well as other school subjects.

Because of the new requirements to teach climate change across a range of subject areas, Hargis notes, “New Jersey is a bright spot” among otherwise limited climate education in the U.S. She says that even in states that have some sort of environmental component in their educational standards, most of them focus on factual knowledge. New Jersey is unusual in also helping students think about solutions.

While science teachers have taught about environmental issues for many years, the New Jersey standards are requiring that educators in other disciplines teach new topics they’ve never tackled before.

Dennis Dagounis, a Roselle Park science teacher and the 2021-22 Union County Teacher of the Year, says one of the challenges with the new NJSLS has been getting buy-in from teachers of other subjects on how climate change can be included across the board. But he says he is seeing teachers in other fields learn about incorporating climate change information into their lessons, including by participating in professional development workshops, learning from research provided by think tanks, and talking to him and other science teachers.

The New Jersey State Board of Education launched a website devoted to resources for climate change education, where teachers and schools can find sample lesson plans, activities, and information about community groups involved in environmental issues.

House, the 2021-22 Atlantic County Teacher of the Year, says he’s been speaking with other teachers who hadn’t taught about sustainability issues before the new standards took effect.

“It’s only a half-step further from what you’re teaching,” House tells them. For example, math teachers can use climate data in word problems. English teachers can create writing prompts around sustainability issues. When elementary school teachers talk about the life cycle of a butterfly, they can discuss how their migration patterns have changed over time due to environmental changes. He says teachers can also talk about the balance among creating a healthy environment, the social impact of climate change and the financial impact.

Students making connections and a difference

Dagounis recalls that he began seeing an increase in interest in environmental issues by his students about 4 or 5 years ago, when they began making connections between climate change and weather effects like storm surges. Since the new standards were implemented in the fall of 2021, students sometimes mention in his classes that they’re learning about the environment in other classes.

“They really are noticing it,” Dagounis says.

But while Dagounis is pleased with the new state standards, he is also concerned that all the information about climate change might overwhelm students and cause anxiety about the future.

“One thing I fear is there’s a lot of information out there that kind of gives you this bleak future because of climate change,” he says. He encourages students to understand that society has overcome negative environmental impacts in the past and can do so now. His life science classes bring problem solving and critical thinking into the picture and try to show the positive impact students can have. “We’ve got to show them that as long as we work together, we can solve this issue in the future as well,” Dagounis says.

It seems Dagounis shouldn’t worry, as surveys and studies show that Generation Z—those born in the late 1990s to the early 2010s—are deeply engaged in environmental issues and prioritize climate change as the most important issue facing the world today. In 2021, a Pew Research Center survey found that Gen Z and Millennials—those born between 1981 and 1996—are the most active in addressing climate change.

Student activists, such as Greta Thunberg from Sweden, who founded the organization Fridays for Future at age 18, have been leading the way on climate change awareness, inspiring others her age and keeping the issue in the headlines. Today, Fridays for Future has chapters all over the world. In September 2021, hundreds of thousands of young protesters mobilized to march in over 1,500 demonstrations in more than 90 countries, including 300 demonstrations in the U.S. These young activists made their voices heard and demanded their leaders take action to slow the effects of climate change.

In addition, college administrators are noticing a trend of incoming students pursuing careers in environmental-related fields to address climate change, according to a report in The Guardian.

“Once you learn how damaged the world’s ecosystems are, it’s not really something you can unsee,” Rachel Larrivee, a 23-year-old sustainability consultant based in Boston, told The Guardian. “To me, there’s no point in pursuing a career–or life for that matter–in any other area.”

Dagounis and House both agree that New Jersey being a leader in climate change education makes sense. Dagounis notes that New Jersey has among the highest-rated public schools in the nation and is a natural leader in this area.

“I think it’s fantastic,” says House about the first-in-the-nation climate change education standards. New Jersey has more shoreline than almost any other state and will continue to be affected by climate change, he notes. The state also is a leader in renewable energy. Programs like solar power and wind turbines bring jobs to the state, House says. “It puts us in a good position.”

Dagounis says he’s seen many hot-button issues throughout his 21 years as a teacher. He hopes that by providing his students with reliable research and critical thinking skills, they will be able to make informed decisions about environmental issues.

House is excited for a time when the juniors and seniors he teaches will have learned about climate change from the time they’re in kindergarten. In the years that he’s been teaching environmental science, he has seen it grow from a niche subject to one with real economic impact. “My former students now have jobs in fields that didn’t exist 15 years ago, 20 years ago,” he remarks. “It feels good to see the program grow.”

This article originally appeared in the spring 2022 issue of The Legal Eagle, Special Climate Change Edition.

Bonus Sidebar: What Can You Do About Climate Change? 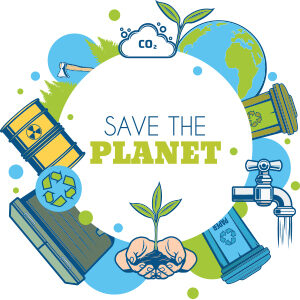 If you want to do your part to reduce emissions, here are a few things you can do. These suggestions may seem small, but they add up.