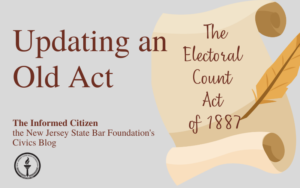 In the U.S. Constitution, Article II, Section 1 sets up the Electoral College, which is a body of electors that gathers every four years to select the president and vice president of the United States based on the electoral votes of the individual states. Each political party at the state level nominates electors. There is a slate of Republican electors and a slate of electors for the Democrats in every state.

So, how many electors does each state have? Under the U.S. Constitution each state’s electoral total matches its congressional delegation sum. For example, New Jersey has 12 representatives in the House of Representatives and two senators, so it gets 14 electors or electoral votes. A majority of electoral votes—270—is needed to win the presidency.