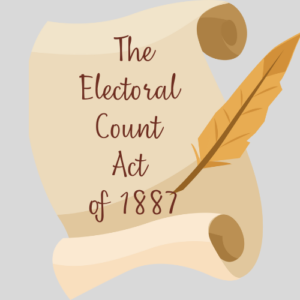 In the U.S. Constitution, Article II, Section 1 sets up the Electoral College, which is a body of electors that gathers every four years to select the president and vice president of the United States based on the electoral votes of the individual states. Each political party at the state level nominates electors. There is a slate of Republican electors and a slate of electors for the Democrats in every state.

So, how many electors does each state have? Under the U.S. Constitution each state’s electoral total matches its congressional delegation sum. For example, New Jersey has 12 representatives in the House of Representatives and two senators, so it gets 14 electors or electoral votes. A majority of electoral votes—270—is needed to win the presidency.

Over the years, clarity on presidential election procedures, specifically the Electoral College, has been needed. To that end, the 12th Amendment was ratified in 1804, and then to provide more clarity, the Electoral Count Act (ECA) of 1887 was passed.

Why was the 12th Amendment needed?

The presidential election of 1796 is when cracks in the system for electing the president started to show. Before the 12th Amendment, the electors from each state voted for two candidates. The top vote getter became president, while the person with the next highest total was appointed vice president. In 1796, John Adams received the most votes, with Thomas Jefferson coming in second. The problem with that outcome was that the two men were from different parties and found it hard to work together.

Proposals were made to fix the rules, but no action was taken. Then the 1800 election ended in a tie between Vice President Jefferson and Aaron Burr. In the case of a tie, the election of the president falls to the House of Representatives. The House took 36 rounds of voting to break the election gridlock, eventually handing the presidency to Jefferson.

Professor Codrington says, “Broadly speaking, the Electoral Count Act of 1887 is an obscure statute that was enacted to fill in the gaps in the U.S. Constitution, including where and when to send electoral vote ballots.”

For instance, the ECA of 1887 stipulates how to resolve disputes and sets deadlines for states to follow in certifying the results of an election. The primary reason for passing the ECA, Professor Codrington says, was the presidential election of 1876. When that election was over, Professor Codrington explains, Democrat Samuel Tilden had a lead in the Electoral College, as well as the popular vote, over Republican candidate Rutherford B. Hayes. Neither candidate, however, had enough electoral votes to claim the presidency, and several states’ Electoral College votes were in dispute. To resolve the matter, an electoral commission, comprised of members of Congress and the U.S. Supreme Court, was established. The commission narrowly decided that the contested votes and the presidency would be awarded to Hayes.

Famously, a “backroom deal” had been made to award Hayes the Electoral College win. The agreement was that if the commission made Hayes president, Republicans would remove the remaining military troops stationed in the South. The troops were there to maintain order and protect formerly enslaved people in the aftermath of the Civil War.

“This marked the formal end of Reconstruction,” says Professor Codrington. “The ECA was enacted the following decade to fill gaps in the constitutional language to ensure that this sort of scenario never arose again.”

Fast forward to the present

While Joseph R. Biden defeated incumbent President Donald J. Trump in the 2020 election by an electoral count of 306 to 232, President Trump and his allies disputed those results, citing unsubstantiated allegations of voter fraud. The former president wanted Vice President Mike Pence to reject the electoral count on January 6th when Congress met to certify the results of the election and send the election back to the states. Vice President Pence refused to do so. The electoral votes were in the process of being counted when thousands of Trump supporters rioted on the U.S. Capitol in an attempt to stop the electoral count. The proceedings were delayed for hours until order could be restored. Seven deaths were connected to the riot and 140 Capitol police were injured.

“The 12th Amendment and the ECA contain several ambiguities and gaps, which former President Trump and his allies tried to exploit to overturn the results of the 2020 election and remain in power,” says Professor Codrington.

Because of those ambiguities, Congress set out to update the ECA of 1887. There are currently competing bills in the House of Representatives and the Senate. The House passed its version—the Presidential Election Reform Act—in September 2022 by a vote of 229 to 203. A similar bill—the Electoral Count Reform and Presidential Transition Improvement Act—has been proposed in the Senate. One thing that both bills have in common is clarifying the role of the Vice President, who presides over the counting of the electoral votes. Both bills stipulate that the VP makes no judgement on the validity of any state’s electoral vote, but simply counts the votes as certified by each state, something that the ECA of 1887 implied but did not explicitly state.

“In other words, it clarifies that the vice president has a ceremonial or ministerial job only,” says Professor Codrington.

Both bills would also make it harder to challenge the state electoral counts and stop the proceedings. Under the current ECA, two members of Congress—one representative from the House and one senator—are needed to lodge an objection to the electoral vote of a state.

“An objection stops the counting and prompts a complicated proceeding to resolve the dispute,” Professor Codrington explains. “So, by setting the number at just two of 535 lawmakers, the current ECA makes it easy to lodge frivolous objections. The proposed reform would increase the number of lawmakers needed to object, thereby making it harder to disrupt the process with unserious objections.”

Where the two bills differ is the number of objectors needed to stop the proceedings. The House bill sets that threshold at two-thirds of both chambers, whereas the Senate bill sets the threshold to halt proceedings lower at one-fifth of both chambers. The House bill also defines the grounds for posing an objection more narrowly than the Senate bill, requiring a strong constitutional basis for the objection.

Michael Luttig, a former U.S. Court of Appeals judge who testified before the U.S. House Select Committee to Investigate the January 6th Attack on the U.S. Capitol, has advised Republican senators on the Electoral Count Act.

As of yet, there has been no vote in the Senate on its bill to reform the ECA of 1887, though there is bipartisan support for the bill. In order for the ECA of 1887 to be revised, however, the House and Senate will need to reconcile both bills and come to a compromise.

In our nation’s history, five presidents—John Quincy Adams, Rutherford B. Hayes, Benjamin Harrison, George W. Bush and Donald J. Trump—have been elected by winning the Electoral College vote but losing the popular vote. According to a 2022 Pew Research Center poll, 63% of Americans think we should elect the president via popular vote, while 35% favor keeping the current Electoral College system. That’s an increase over the 2021 results of the same survey. At that time, 55% favored popular vote versus 43% who supported the Electoral College.

So, why do we have an Electoral College? This is where the small state argument comes in. When the country was founded, the smaller states, mostly in the South, felt that they would be ignored by candidates during a national election in favor of states with larger populations.

“The Framers argued publicly that citizens would not have enough information about the candidates and would typically resort to choosing the local candidate or the ‘favorite son,’” says Professor Codrington. “They also argued against a parliamentary system, like in the United Kingdom, which would have Congress selecting the president because it would result in the legislative branch having too much control over the executive branch. Privately, many of the delegates made clear that they simply did not trust the people to elect the president.”

Today, many believe that smaller states have too much power. Professor Codrington points out, for example, that California (population: more than 39 million), wields the same power in the Senate as Wyoming (population: less than 600,000).

“That means in the Senate, each Californian’s vote is worth a fraction of their counterpart in Wyoming,” says Professor Codrington.

“In the modern age, Americans have a lot of access to information about candidates and, therefore, are unlikely to lack the information required to make an informed decision. Even more, though, the notion of democracy requires trust in the judgment of the people to vote for their elected officials—and the Constitution has been amended several times to expand and reinforce this idea,” Professor Codrington says. “Under the rules of other elections, the person who wins the most votes, wins the race. In modern times, there is no good reason to have a system that might award—and has awarded—the highest office in the land to the candidate who does not win the most votes.”

A relic of slavery

Since 1800, there have been more than 700 attempts to reform or eliminate the Electoral College, which many consider to be a relic of slavery.

As Professor Codrington explains, the Southern delegates at the Constitutional Convention of 1787 when the U.S. Constitution was drafted, opposed having a direct election for the president because it was to their disadvantage. The South initially had a larger population than the North, however, a significant portion of that population consisted of enslaved people who were prohibited from voting. Meanwhile, he says, the North’s population was growing rapidly. The delegates from the South feared that their preferred candidate would consistently lose the election if held under a direct popular vote. The Electoral College system was designed to mitigate this by giving the South a boost.

“Each state was to receive a number of electors based on its population and, despite the fact that Black people could not vote and were considered property, the Constitution was drafted to permit states to count 60% of their enslaved population for purposes of representation in Congress and the Electoral College,” Professor Codrington explains.

This was known as the three-fifths compromise and appears in Article I, Section 2 of the U.S. Constitution. Because more than 90 percent of the country’s enslaved people were held captive in the South, Professor Codrington notes, the states in that region received extra Electoral College votes. In fact, Professor Codrington says, these extra votes “created a perverse incentive to continue and expand slavery” and points out “for more than 50 of the nation’s first 70 years, a slaveholder from the South won the presidency, maintained pro-slavery policies, and appointed pro-slavery people to the highest government positions.”

In 1970, the country was poised to abolish the Electoral College by constitutional amendment and replace it with a direct popular vote for the president; however, Southern segregationists like Senator Strom Thurmond filibustered the measure, says Professor Codrington.

Glossary Words
bipartisan: supported by two political parties.
filibuster: an action such as a prolonged speech that obstructs progress in a legislative assembly while not technically contravening the required procedures.
incumbent: currently holding office.
parliamentary: a system of government (like in the United Kingdom & Canada) that has the real executive power vested in a cabinet composed of members of a legislature who are individually and collectively responsible to the legislature.
ratify: sign or give formal consent to (a treaty, contract, or agreement), making it officially valid.
statute: a written law passed by a legislative body.
unsubstantiated: not supported or proven by evidence.