Check Out the Fall 2022 Edition of Respect, NJSBF’s Diversity Newsletter 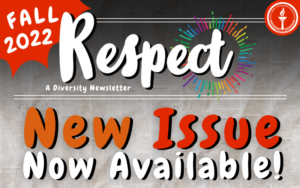 The fall 2022 edition of Respect, the Foundation’s diversity newsletter is now available. Respect’s fall issue contains articles on voter suppression, the tragedy of Indian boarding schools and transgender sports bans, with a sidebar on 50 years of Title IX. A PDF of The fall issue can be downloaded or individual articles can be read and printed from Respect’s blog, The Rundown.

Here are the headlines from the fall 2022 issue:

Coping with the Tragedy of Indian Boarding Schools

Imagine being taken from your family, told you can’t speak the language you’ve always spoken, wear the clothes you’ve always worn, observe the cultural traditions you’ve always held, and you would now be called by a different “American” name. That was the reality for tens of thousands of Native American children in the United States from 1819 to 1969.

In June 2021, U.S. Department of the Interior Secretary Deb Haaland, a member of Laguna Pueblo who is the first Native American to hold a U.S. cabinet position, announced that her department would launch an investigation—the Federal Indian Boarding School Initiative—into the United States’ federal Indian boarding school system, which was established in the early 1800s.  READ MORE

Participation in sports—from Little League to high school to the collegiate level—is about more than just winning. Involvement in sports promotes life skills such as discipline, responsibility, self-confidence, and teamwork.

According to Inside Higher Education, there are currently 20 states that limit or ban transgender athletes in grades K-12 from participating in sports that align with their gender identity. The constitutionality of these bans is being challenged under Title IX, the landmark gender equality law enacted in 1972, which prohibits discrimination based on sex in any educational program receiving federal funding.  READ MORE

Voter Suppression: No Voice, No Representation

The U.S. Constitution established the United States as a democratic republic, meaning that representatives of our government—federal, state, and local—are elected by its citizens. Voting, in fact, is considered a civic duty and the way that citizens can make their voices heard.

“We get to decide together who will represent us,” says Henal Patel, an attorney and director of the New Jersey Institute for Social Justice’s Democracy & Justice Program.

But “deciding together” has not been an easy road. The passage of election interference legislation emerged after the 2020 presidential election, but variations of voter suppression tactics have existed since our nation’s founding. READ MORE