Voter Suppression: No Voice, No Representation 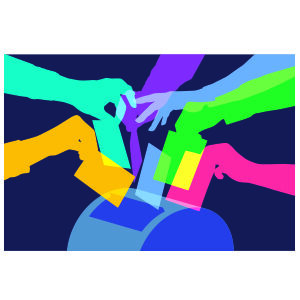 The U.S. Constitution established the United States as a democratic republic, meaning that representatives of our government—federal, state, and local—are elected by its citizens. Voting, in fact, is considered a civic duty and the way that citizens can make their voices heard.

“We get to decide together who will represent us,” says Henal Patel, an attorney and director of the New Jersey Institute for Social Justice’s Democracy & Justice Program.

But “deciding together” has not been an easy road. The passage of election interference legislation emerged after the 2020 presidential election, but variations of voter suppression tactics have existed since our nation’s founding. For example, during the Reconstruction period after the Civil War, the 15th Amendment to the U.S. Constitution was passed, giving Black men the right to vote. Thereafter, many state legislatures passed poll taxes which required that people pay a fee to vote. The poll tax effectively disenfranchised many poor people—both Black and white.

Other past examples of voter suppression include literacy tests and grandfather clauses. Literacy tests, first introduced in 1890, which proponents contended were implemented to make sure that a potential voter could read, were given at the discretion of election officials. These officials determined if an applicant passed or failed. Grandfather clauses were passed in several Southern states after the Civil War, including Alabama, Georgia, Louisiana, North Carolina, Oklahoma and Virginia. The clauses said that you could not vote unless your grandfather had voted prior to January 1, 1867. Obviously, this excluded the formerly enslaved.

“This is what voter suppression looks like,” says Patel. “Millions of people are denied the right to vote.”

Proponents of these laws argue they are needed to protect against voter fraud. Of the nine laws passed by state legislatures, seven will be in place in time for the November 2022 midterm elections. In addition, 27 states in total have introduced more than 148 election interference bills, the Brennan Center says. Some are moving through state legislatures and could become law.

Democracy hinges on the electorate accepting the results of free and fair elections. Voting advocates argue that election interference laws sow seeds of doubt among voters to suppress turnout.

“A representative democracy cannot function if citizens do not trust that the process of electing representatives accurately reflects the will of the people,” says Dr. Lorraine Minnite, a professor at Rutgers Law School—Camden who is an expert on voter suppression and voter fraud. She has written two books on the subject, The Myth of Voter Fraud and Keeping Down the Black Vote: Race and the Demobilization of American Voters. “Efforts to destroy that trust weaken our democracy.”

Some governors and state legislatures are also creating new law enforcement agencies to aggressively pursue voter fraud allegations, even though widespread voting fraud has not been substantiated. For example, in April 2022, Florida Governor Ron DeSantis signed a bill creating an election police unit, which will be comprised of 15 staff members and 10 police officers, who will be dedicated to investigating election crimes. This new department will cost Floridians $3.7 million, despite Florida’s secretary of state referring only 75 fraud complaints in 2020 to law enforcement out of 262 total complaints, according to a New York Times investigation.

In Arizona, an election integrity unit was formed after the 2018 midterms when there were significant wins for Democrats. After three years, the unit investigated more than 2,000 complaints and prosecuted just 20 cases. Studies have shown that many cases of voter fraud are mistakes. In fact, a report from the Brennan Center found that a large number of incidents of voter fraud can be traced to clerical errors.

Voter fraud, according to Dr. Minnite, is rare because there is little to gain since voting more than once will most likely not change the outcome of any election. Two investigations—one conducted by The New York Times and another by the Associated Press—found no evidence of voter fraud in the 2020 election. The Associated Press analysis, which focused on the 25.5 million votes cast in the six battleground states—Arizona, Georgia, Michigan, Nevada, Pennsylvania and Wisconsin—revealed fewer than 475 possible claims of fraud.

Election police and election integrity units “are misguided and potentially damaging to the voting process because the presence of this law enforcement effort when there is no crime being committed can have the effect of intimidating voters and thereby depressing the turnout,” Dr. Minnite says.

Dr. Minnite says that there are safeguards against voter fraud in most states and there have been for decades, which is another reason that voter fraud is rare. Those safeguards include routine voter list maintenance and post-election audits.

“The irony is that in a democracy, the integrity of elections depends not only on a fraud-free voting process, but just as importantly on a full and robust turnout,” says Dr. Minnite. “Voter suppression through rules that make it unnecessarily difficult for some people to vote, or through the creation of a voting environment that is potentially threatening, such as one that could be cultivated by the presence of unnecessary election police, are much larger problems in U.S. elections than any threat of voter fraud.”

The Democracy & Justice Program that Patel oversees has been working on giving back the right to vote to those who are incarcerated. New Jersey has the worst Black to white incarceration rate in the country, with 61% of those incarcerated being Black when the general population is only 15% Black, she says.

“It’s not a coincidence that the bulk of mass incarceration are Black and brown people who cannot vote,” Patel says. “Our body of work helps to build a multicultural democracy in New Jersey so that everyone can have a voice at the table.”

Patel believes that change can happen at the grassroots level to fight against voter suppression practices.

“If an entire group gets involved, they can move the needle,” says Patel.

Still, Patel points out that in the last three years there have been a flurry of laws that make it harder to vote and target marginalized people.

In July 2022, the U.S. Justice Department filed a lawsuit against the State of Arizona challenging voting restrictions imposed by House Bill 2492, which requires proof of citizenship in order to vote. The Justice Department contends that the law, which is scheduled to take effect in January 2023, violates the National Voter Registration Act of 1993 and parts of the Civil Rights Act of 1964. Documenting proof of citizenship is especially hard for Native Americans, voting advocates note. Someone born on a reservation may not have a proper birth certificate so have no way to prove citizenship.

“Voting is a right, not a privilege,” says Patel. “And democracy is fragile. It requires all of us to defend it outright.”

Glossary Words
disenfranchise — to deprive of a privilege or right (i.e., the right to vote).
partisan — someone who supports a party or cause with great devotion.
poll tax—voting fee, which was used to disenfranchise Black voters.

This article originally appeared in the fall 2022 edition of Respect, our diversity newsletter.