Check Out Winter 2022 Edition of Respect 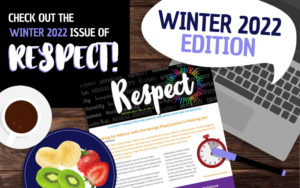 The winter 2022 edition of Respect, the Foundation’s diversity newsletter is now available. Respect’s fall issue contains articles on the George Floyd Justice in Policing Act, anti-Semitism and a U.S. Supreme Court decision in a foster care case. A PDF of The winter issue can be downloaded or individual articles can be read and printed from Respect’s blog, The Rundown.

Here are the headlines from the winter 2022 issue:

Looking for Reform with the George Floyd Justice in Policing Act

On May 25, 2020, George Floyd, a Black man, was detained by police officers in Minneapolis. He had allegedly used counterfeit money to make a purchase at a convenience store. Within minutes, he was face down on the street. Officer Derek Chauvin pinned him down by kneeling on his neck for nearly nine minutes. According to reports, Floyd was heard saying, “I can’t breathe” more than 20 times before he fell silent. READ MORE

The First Amendment to the U.S. Constitution guarantees the right to freedom of religion. But what happens when one person’s religious freedom conflicts with someone else’s rights?  READ MORE

Anti-Semitism is often called the “world’s oldest hatred.” The threat of anti-Semitic attacks against Jewish communities still looms large today. The American Jewish Committee, a Jewish advocacy organization founded in 1906, released a survey in October 2021 that revealed one in four Jewish citizens in the U.S. reported experiencing anti-Jewish hatred in the preceding 12 months—either online or in-person. READ MORE