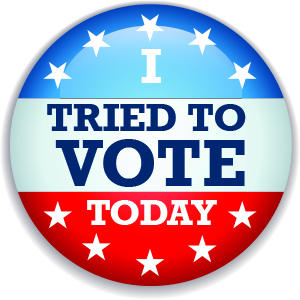 History shows that voter suppression has been part of the American fabric in various forms since the country’s founding and is still widespread in certain parts of the country. For example, Dr. Yohuru Williams, a history professor and director of the Racial Justice Initiative at the University of St. Thomas in Minnesota, notes that denying women the franchise until 1920 suppressed women’s voices in government.

“Where we really begin to think about voter suppression in a more modern sense is in the aftermath of Civil War reconstruction, particularly the passage of the 15th amendment to the Constitution, which says the right to vote shall not be abridged or denied based on race, color or previous condition of servitude,” Dr. Williams explains.

The American Bar Association defines voter suppression as “an effort to reduce a person or community’s opportunity to vote.” The Encyclopedia Britannica defines it as an election strategy, one whose purpose is to reduce voting or registering to vote by members of a targeted racial group, political party or religious community.

Early examples of voter suppression, Dr. Williams says, included the requirement that African American former slaves be able to pass a literacy test before they could vote. In addition, the grandfather clause stipulated that if your grandfather had not voted in the state prior to January 1866, then you couldn’t vote. He says these requirements were “clearly an attempt to circumvent the 15th amendment.” Another example of voter suppression was the establishment of poll taxes.

“A poll tax was a law requiring that a Black person, who is deemed eligible to vote, pay their property taxes up to that point,” Dr. Williams explained. “So, if you didn’t own property or you couldn’t pay those taxes, then you could be disqualified from voting.”

The Voting Rights Act of 1965 was meant to remedy the suppression of Black voting in the South in the aftermath of the Civil Rights movement. “It established this idea of preclearance, which said that in those states where you had significant efforts to suppress the African American vote, you would have oversight by the government. In order for them [states] to make any changes to their election laws, they had to get preclearance from the federal government.” explains Dr. Williams.

In 2013, the U.S. Supreme Court heard the case of Shelby County v. Holder, which dealt with the Voting Rights Act’s preclearance provision.

“In the case of Shelby County, the U.S. Supreme Court took a look at the Voting Rights Act of 1965 and said this preclearance has gone on too long,” explains Dr. Williams. “They removed preclearance and said it was unconstitutional.”

With preclearance gone, the way was cleared for states to re-enact, without federal oversight, a host of efforts aimed at the suppression of Black voters. Dr. Williams says in the aftermath of the Shelby decision many states changed polling places at the last minute or closed the polls in certain areas in an effort to prevent specfic segments of people from being able to vote. In addition, Dr. Williams points to the requirement of voter ID in some states, which is another form of voter suppression.  Approximately 21 million American citizens lack a government-issued ID, according to the American Civil Liberties Union. Of those lacking the necessary ID to vote, approximately 25 percent are Black voters.

According to the Brennan Center for Justice at New York University, a nonpartisan law and public policy institute, 18 states have enacted 30 laws between January 2021 and July 2021 that restrict voter access. In addition, the Brennan Center says that more than 400 bills restriciting voter access have been introduced nationwide in the 2021 legislative session.

In September 2021, Texas Governor Greg Abbott signed into law what critics have called a massive voter suppression bill. Among other things, the law gives poll watchers more authority, including closing polling stations and observing all election activities and also makes it a criminal offense if an election official “knowingly prevents a watcher from observing an activity.” A poll watcher is someone appointed by a political party to observe the election process, including at polling places or as mail-in ballots are counted. An election official can be a state’s Secretary of State, who maintains official election results, or a poll worker, who volunteers to work at a polling place signing in voters on Election Day.

The new Texas law also makes it a state felony for election officials to proactively mail ballots to voters if not specifically requested. It also prohibits drive-through and 24-hour voting locations, something that was utilized heavily by voters in the most diverse and populated county in Texas.

Governor Abbott said during a signing ceremony that the law is intended to combat voter fraud and restore voter confidence in state elections. Critics have said it will make it harder for Black and Hispanic voters to cast ballots, citing the lack of early voting and the potential for voter intimidation by poll watchers.

The Brennan Center, along with the Mexican American Legal Defense and Educational Fund, as well as two law firms, are suing the state of Texas in federal district court claiming the Texas law violates the First, Fourteenth and Fifteenth Amendments to the U.S. Constitution, as well as Section 2 of the Voting Rights Act and the Americans with Disabilities Act. The lawsuit contends that cases of voter fraud are essentially non-existent. In searching for fraud, the Texas Attorney General found 16 cases of false addresses among 17 million voters, according to the lawsuit. The complaint was filed in September 2021 and at press time it is still pending.

It was not all bad news at the state level, according to the Brennan Center. At least 25 states enacted 54 laws that contained provisions to expand voting access, including laws that make voter registration easier, restore voting rights to the formerly incarcerated and increase access to early and/or mail-in voting. More than 900 bills in 49 states expanding access to voting were introduced in the 2021 legislative session, according to the Brennan Center.

In New Jersey, Governor Phil Murphy signed into law a measure that expands early, in-person voting. Beginning November 2021, New Jersey voters will be able to vote up to 10 days before Election Day, including on weekends. The new law allows voters to pick a day that works with their schedule.

An appeals court in 2020 ruled that two Arizona voting laws instituted to address “election integrity” violated Section 2 of the Voting Rights Act. One law disqualified any ballot cast in the wrong precinct. The other law made it a crime for anyone but a family or household member or caregiver to return another person’s mail ballot. Essentially, this second law bans community activists from collecting ballots and delivering them to polling places, a practice that critics call “ballot harvesting,” which many tribal nations rely on as it can be a long drive to a polling place.

In its decision, the U.S. Court of Appeals for the Ninth Circuit cited “frequent changes in polling locations; confusing placement of polling locations; and high rates of residential mobility” as overwhelmingly affecting Black, Latino and Native American voters in Arizona. In addition, the court stated, “there is no evidence of any fraud in the long history of third-party ballot collection in Arizona.”

The case, Brnovich v. DNC, was appealed to the U.S. Supreme Court and in July 2021, the Court overturned the Ninth Circuit decision and upheld both laws concluding that the burdens they imposed were minor. In the Court’s majority opinion, Justice Samuel Alito wrote, “Voting takes time and, for almost everyone, some travel, even if only to a nearby mailbox. Mere inconvenience cannot be enough.”

Justice Elena Kagan issued a dissenting opinion where she wrote about the importance of the Voting Rights Act and how the Court’s decision in Brnovich v. DNC has damaged it.

“The Voting Rights Act was meant to replace state and local election rules that needlessly make voting harder for members of one race than for others,” Justice Kagan wrote. “The democratic principle it upholds is the right of every American, of every race, to have equal access to the ballot box. The majority today undermines that principle as it refuses to apply the terms of the statute. By declaring some racially discriminatory burdens inconsequential, and by refusing to subject asserted state interests to serious means-end scrutiny, the majority enables voting discrimination.”

There have been several federal bills proposed in Congress to address voter suppression. The For the People Act and the John Lewis Voting Rights Act, named for the civil rights icon who represented Georgia in the House for 34 years, would both provide protections for the right to vote. Both pieces of legislation were passed in the House of Representatives but have stalled in the U.S. Senate.

More recently, in September 2021, the Freedom to Vote Act was proposed in the Senate. The Act is a scaled back version of the For the People Act, which would establish some federally mandated election rules, as well as expand early voting options, voter identification requirements and access to mail-in ballots. In October 2021, a vote to bring the legislation to the Senate floor for debate failed. At press time, there has been no further movement.

While passage of voting rights legislation would be significant, voting rights advocates contend what is needed is a federal constitutional amendment explicitly protecting every citizen’s right to vote. Not having such an amendment leaves many of the laws governing voting up to the states.

This article originally appeared in the fall 2021 issue of Respect, the NJSBF’s diversity newsletter.