Asian Americans Experience Pandemic with a Side of Hate 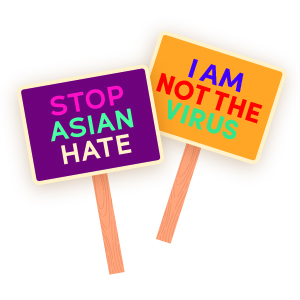 When the coronavirus pandemic grew rampant in 2020, it took a toll on more than just health. Another problem surfaced—hate crimes against Asian Americans, who were wrongly being blamed for the COVID-19 outbreak in the United States because the origin of the virus had been connected to Wuhan, China.

The Federal Bureau of Investigation (FBI) defines a hate crime as a “committed criminal offense which is motivated, in whole or in part, by the offender’s bias(es) against a race, religion, disability, sexual orientation, ethnicity, gender, or gender identity.” In its annual hate crimes statistics report, released in September 2021, the FBI reported that more than 10,000 people reported being the victim of a hate crime in the past year. Studies showed that Anti-Asian hate crimes rose nearly 150 percent, and the FBI report revealed that they were targeted at least 4,500 times in 2020.

More than 65 percent of the reported hate crimes were verbal assaults and harassment. Nearly 13 percent were physical attacks like the 75-year-old Asian man in California who died from injuries sustained from an assault by a man who has a history of targeting older Asian people. Civil rights violations, like being refused service, accounted for approximately 10 percent of total incidents.

Many people are unwilling to report hate crime incidents because they are complicated and can generate more fear, according to Marita Etcubañez, senior director of strategic initiatives at the nonprofit Asian Americans Advancing Justice (AAJC).

“Victims need to be heard and be helped,” explains Etcubañez. “Hate crimes are tricky because there has to be an underlying criminal offense like assault.”

Racial slurs shouted during an assault can be proof of a hate crime but in some physical attacks, no words are exchanged, she says.

The latest uptick in hate crimes is not an isolated occurrence for Asian Americans. Seen as a racial threat to white America, immigrants from Asian countries have been victims of discrimination, racism and violent acts since the mid-1800s when they fled their home countries for a better life in America. Chinese immigrants came through San Francisco to seek work with the railroads, agriculture, the garment industry and to take advantage of the California Gold Rush. They were met with strong resistance, first on a state level in California and then on a federal level.

In 1852, California imposed a Foreign Miners Tax of $3 a month only on Chinese workers. By 1870, $5 million had been paid to the state. Racially charged violence between white and Chinese miners escalated. In 1854, George Hall was convicted of the murder of a Chinese miner. In an appeal of his conviction, the California Supreme Court ruled that the Chinese, like African Americans and Native Americans, were not allowed to testify in court, especially against white citizens, deeming them “…a race of people whom nature marked as inferior…” As a result of this decision, the testimony of the three Chinese witnesses to the murder was deemed inadmissible. Hall’s conviction and death sentence was overturned.

As tensions grew in California, in 1871 in Los Angeles’ Chinatown, two residents were fighting when a white police officer intervened and was killed. A mob of more than 500 stormed Chinatown and captured, tortured, and murdered 20 Chinese men in what is thought of as one of the worst mass lynchings in American history. Eight white men were convicted of manslaughter; however, the convictions were overturned on a technicality.

On the federal level, the U.S. government forbid Asian women from entering the country with the 1875 Page Act. This controlled the growth of Asian American families, as Asians were not allowed to intermarry. It also started discriminatory immigration policies against other ethnic groups. The sentiment that Chinese workers were taking jobs and affecting white “racial purity” prompted the passage of the Chinese Exclusion Act in 1882. Signed into law by President Chester A. Arthur, it suspended Chinese immigration for 10 years, and made immigrants ineligible for naturalized citizenship. This was the first time in U.S. history that a federal law put restrictions on entering the country because of someone’s race.

In 1892, the Geary Act extended the Chinese Exclusion Act for another 10 years. Chinese immigrants living in the United States had to carry “certificates of residence” or else be sentenced to hard labor or deportation. After World War I, the United States shut down almost all immigration from Asia and restricted other “undesirable” groups such as Middle Easterners, Hindu and East Indians, Mexicans, and the Japanese. In 1943, the Magnuson Act repealed the Chinese Exclusion Acts, allowing Chinese immigrants and their American-born families to become citizens.

During World War II, fear of espionage and threatened national security flooded the country after Pearl Harbor in Hawaii was bombed by the Japanese. In what has been called a dark stain on U.S. history, President Franklin D. Roosevelt signed an executive order forcing more than 120,000 Japanese Americans to be relocated to internment camps for the duration of the war. This mass incarceration incited anti-Japanese sentiment even after the war ended. In addition to their liberty, those incarcerated in these camps lost their homes, businesses and savings.

According to 2020 census data, there are more than 22 million people of Asian descent living in the U.S. today, making up nearly six percent of the population. Those 22 million people represent more than 50 different ethnicities within the Asian community, with the five largest being Chinese, Japanese, Korean, Indian and Filipino. By 2055, Asians are projected to be the largest immigrant group in the United States, according to a research study conducted by the Pew Research Center.

Forty-six states, including New Jersey, have state laws regarding hate crimes, which can lead to inconsistent policies and protections. The increase in hate crimes and racist language and violence against Asian American and Pacific Islander (AAPI) communities across the country during the pandemic prompted an effort to get a federal law passed.

Senator Mazie K. Hirono of Hawaii and Representative Grace Meng of New York introduced the COVID-19 Anti-Hate Crimes Act to strengthen federal efforts in handling all hate crimes. The Act was passed by the U.S. Senate in April 2021 by a vote of 94-1. The House of Representatives passed it in May 2021 by a vote of 364 to 62. President Joseph R. Biden signed the legislation into law in June 2021.

The Act holds law enforcement accountable in how to track and report hate crimes. For example, the Department of Justice must designate a point person to advance the review of coronavirus-related hate crimes and provide guidance to alleviate the use of racially inflammatory language to describe the pandemic. It also expands efforts to make reporting hate crimes at the state and local level easier, including providing an online option, as well as resources in multiple languages. The thought is that by improving law enforcement methods more victims might be encouraged to come forward.

“We [AAJC] were always saying how law enforcement is inadequate in taking reports on hate crimes,” Etcubañez says. In addition, Etcubañez mentions the restorative justice solutions outside of law enforcement and the criminal justice system that are included in the legislation as a plus.

“There are provisions that allow defendants to go through education programs and community service,” she says.

Although hate crimes and discrimination against Asian Americans have been part of U.S. history, Etcubañez says the COVID-19 Anti-Hate Crimes Act is a call to action, providing safety nets to allow communities to thrive.

“We recognize the law won’t fix a problem this complex, but it’s a start,” Etcubañez says. “It’s important that people are aware and educated and become part of the answer.”

In addition, efforts to include Asian American history in K-12 curriculum and provide culturally sensitive public education campaigns about bias against people of Asian descent can educate individuals and break stereotypes. In July 2021, Illinois became the first state to mandate teaching Asian American history in its public schools. Beginning with the 2022-2023 school year, all Illinois public elementary and high schools will be required to include a unit devoted to AAPI history.

Efforts to do the same in the Garden State have ramped up, spearheaded by Make Us Visible NJ, a coalition of students, parents, educators and legislators that advocate for including comprehensive AAPI studies in all K-12 public schools. In May 2021, a bill was introduced in the New Jersey Senate that would do just that. At press time, the bill had been referred to the Senate Education Committee and was still pending.

“Asians were part of the United States even well before many white European immigrants came through Ellis Island,” Sohyun An, a professor at Kennesaw State University in Georgia, who researches Asian American history, told Time magazine. Professor An points out in the Time piece that Asians are still thought of as “foreigners,” and that not having AAPI studies is “a missed opportunity in school to teach that Asians are a part of America.”

Glossary Words
espionage: the practice of spying.
overturned: in the law, to void a prior legal precedent.

Although Chinese Americans have endured extreme discrimination for more than a century, there have been two notable U.S. Supreme Court decisions that were decided in their favor.

In 1880, San Francisco passed a law requiring permits for laundries housed in wooden buildings, claiming the buildings were more vulnerable to fires. Of the 320 laundries in San Francisco at the time, 310 were housed in wooden buildings, and most (240) had Chinese owners. Only one Chinese laundry was issued a permit. Yick Wo, a laundry owned by Lee Yick for 22 years was denied a permit.

When Sheriff Peter Hopkins tried to arrest Yick for not having a permit, he refused to pay the $10 fine (approximately $268 today) and was jailed. Yick sued, arguing that the fine and discriminatory enforcement of the ordinance violated his rights under the equal protection clause of the Fourteenth Amendment. Yick Wo v. Hopkins was argued before the U.S. Supreme Court in 1886.

In a unanimous decision, the Court concluded that, despite the impartial wording of the law, its biased enforcement violated the equal protection clause. The Court said, even if a law is impartial on its face, “if it is applied and administered by public authority with an evil eye and an unequal hand” then it is unconstitutional. The Court concluded that the biased enforcement experienced by Yick amounted to “a practical denial by the state of that equal protection of the law” and therefore violated the Fourteenth Amendment.

Yick Wo set a precedent and has been cited in more than 150 U.S. Supreme cases. That precedent was used during the civil rights movement to strike down laws limiting the rights of African Americans.

The case involved Wong Kim Ark, who was born in San Francisco to Chinese immigrants who were barred from ever becoming U.S. citizens due to the Chinese Exclusion Act of 1882. Wong took a trip to China and was denied re-entry to the United States on the grounds that the son of a Chinese national could never be a U.S. citizen. Wong sued the federal government, resulting in the landmark decision. The Court’s majority opinion stated: “the American citizenship which Wong Kim Ark acquired by birth within the United States has not been lost or taken away by anything happening since his birth.”

Glossary Words
jurisdiction: authority to interpret or apply the law.
majority opinion: a statement written by a judge or justice that reflects the opinion reached by the majority of their colleagues.
precedent: a legal case that will serve as a model for any future case dealing with the same issues.

This article and sidebar originally appeared in the fall 2021 issue of Respect, the NJSBF’s diversity newsletter.