History Tells Us that Protests Can Bring Change 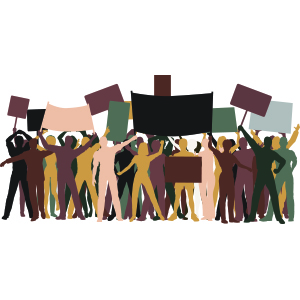 The killing of George Floyd during an arrest by Minneapolis police in May 2020 ignited protests across the nation calling for police reform and an end to systemic racism.

According to data from Civis Analytics, a data science firm, as many as 26 million people have participated in demonstrations since George Floyd’s death. The New York Times reports that those numbers make the Black Lives Matter protests the largest in our nation’s history. According to the data, more than 40 percent of U.S. counties have had a protest and they are continuing.

“It looks, for all the world, like these protests are achieving what very few do: setting in motion a period of significant, sustained, and widespread social, political change,” Douglas McAdam, a professor at Stanford University who studies social movements, told The New York Times. “We appear to be experiencing a social change tipping point—that is as rare in society as it is potentially consequential.”

To put the Black Lives Matter protests in context, Deva Woodly, an associate professor of politics at the New School, a private research university in New York, told The New York Times, “If we added up all those protests [from the 1960s civil rights marches] during that period, we’re talking about hundreds of thousands of people, but not millions”

Far from merely generating nightly media coverage, the Black Lives Matter demonstrations have resulted in concrete changes in police practices. Minneapolis banned the controversial tactic of chokeholds, with New York state and Aurora, Colorado following suit. It also seems that Minneapolis will restructure its police department, although what form that will take is still unclear. In New Jersey, Attorney General Gurbir Grewal announced the establishment of a statewide database to track instances of police acting with excessive force.

All these actions support the view that protests can spark real societal change, which doesn’t happen overnight.

One group, usually a marginalized group of citizens, refuses to submit to historical norms, upending long-established standards of behavior, Professor Burkey says. For example, the sit-ins and demonstrations during the Civil Rights Movement succeeded because African Americans declined to conform any longer to Jim Crow laws that essentially relegated them to second-class status, he says.

Professor Burkey explains that by withdrawing their cooperation in what they identified as an unjust system, in the form of striking or not sitting in the right seat on the bus, African Americans created enough disruption in the daily life of the South that President Lyndon Johnson and other politicians ultimately had to push for the passage of the Civil Rights Act of 1964 and the Voting Rights Act of 1965.

“Protests are anti-institutional by their very nature,” he says. “It happens because we’re dissatisfied with mainstream institutions.”

Professor Burkey also points to the anti-war demonstrations of the 1960s and 1970s, during which protestors burned their draft cards and attacked draft boards. He says that in that instance, it became “not just a moral awakening moment,” but also a moment in which those in power realized that to prevent more radical change, concessions had to be made to the underclass. Public sentiment ultimately turned against the war, Professor Burkey says, because there was so much civil disobedience, even within the military at that time.

In the aftermath of George Floyd’s death, several cities swiftly changed laws on the local level. However, Professor Burkey says new laws shouldn’t always be the measure of a protest movement’s success.

“Rarely does success take the form of an immediate legislative response as we saw following George Floyd’s death when cities began to ban chokeholds,” he says. “Although that success seemed gratifying, we have to remember that a full-throated federal response to Black Lives Matter, which is not limited to banning chokeholds, remains far from certain.”

It sometimes takes decades to topple long-standing cultural attitudes. In many cases protests trigger a national conversation about the unfairness of social norms and then act as a spark to spur legislative change. For example, the Stonewall Inn riots of the late 1960s didn’t result in an immediate acceptance of LGBTQ rights, but it launched a movement that culminated in a 2015 Supreme Court decision granting marriage equality.

“It is impossible to imagine the Court granting same sex couples the right to marry [without] a half century of LGBTQ agitation, beginning with the Stonewall Inn riots in 1969, to demonstrate in a very public and visual way the humanity of gay people,” Professor Burkey says. “The Stonewall Riots accomplished nothing in the way of legislation [immediately] but they started a narrative about fundamental dignity.”

Protests are a protected right under the First Amendment, which guarantees the right to peacefully assemble. However, cities and municipalities can place reasonable limitations on demonstrations.

“The government is permitted to place neutral time, place, and manner restrictions on protests,” Carlos Ball, a professor at Rutgers Law School—Newark, says. “Cities, for example, may require protestors to march down one avenue as opposed to another, or to demonstrate during certain hours of the day.”

Professor Ball says there are two things that are crucial about government restriction.

“First, the restrictions must allow for a reasonable opportunity to assemble,” he says. “Second, the government cannot make distinctions based on the ideological message of the protests by, for example, giving preferential treatment to one political group over another.”

Research suggests that more can be accomplished with peaceful protests rather than violent ones. In 2011, authors Erica Chenoweth and Maria J. Stephan analyzed the outcomes of more than 300 violent and nonviolent protests between 2000 and 2006 in their book Why Civil Resistance Works. What they found is that nonviolent campaigns resulted in success 53 percent of the time compared to 26 percent for violent campaigns. The authors say nonviolent social movements lend legitimacy to protests and attract more participants. In addition, if a protest sparks a state-sponsored backlash against nonviolent protestors, public perceptions are more likely to be sympathetic to the protestors.

That’s essentially what happened in the 1960s when civil rights marchers were met with police force, Professor Burkey says.

“If you look at the sit-ins and Freedom Riders of the Civil Rights Movement, while aggressively transgressing Jim Crow laws, they still humbly submitted to police punishment,” he says. “They showcased their restraint and civility and non-violence.”

If protests are seen as a lightning rod for widespread violence, however, there could be a backlash against the cause. In an article published in The New Yorker, Omar Wasow, a professor of politics at Princeton University, noted that when protestors react with what could be perceived as aggression, or looting occurs, it can damage the cause.

“Instead of talking about the history of police killings in Minneapolis, we are talking about a store going up in flames, and the focus in reporting tends to shift from a justice frame to a crime frame,” Professor Wasow said. “And that is an unfortunate thing for a protest movement. It ends up undermining the interests of the advocates.”

Violence doesn’t necessarily doom a protest movement to failure, according to Professor Burkey, who points to the early riots that instigated the labor movement in the United States. In 1877, railroad workers stopped working to protest unsafe working conditions and low wages, sparking riots and ushering in decades of labor unrest. Ultimately, though, the movement resulted in the passage of the National Labor Relations Act of 1935, which permitted collective bargaining.

“The labor rioters of 1877 were doing violent things toward property and were scorned in their time, but we tend to hold them in higher regard today,” Professor Burkey says.

Evidence that the Black Lives Matter protests are having an effect on the perception of racism in this country is reflected in a Monmouth University poll released in June 2020. The poll revealed that 76 percent of Americans, including 71 percent of white people, acknowledge that in the United States racism and discrimination is a “big problem,” which is a 26 percent increase from 2015.

Glossary Words
civil disobedience: refusal to comply with certain laws as a peaceful form of protest.
collective bargaining: the negotiation of wages and/or working conditions by an organized body of employees.