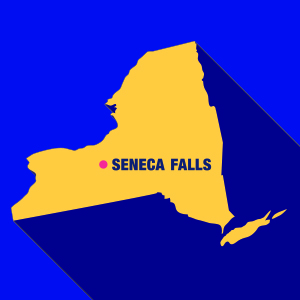 On August 18, 1920, the 19th Amendment, which granted suffrage to women, was ratified by the states. It was a stunning achievement, representing the single largest influx of voters to the electorate in American history.

The Women’s Suffrage Movement had a long and difficult journey beginning in 1848 with the first women’s rights convention held in Seneca Falls, NY, led by well-known suffragists Elizabeth Cady Stanton and Lucretia Mott. Like all movements, it met with resistance, and it took many people from all walks of life and different backgrounds to achieve its ultimate goal.

At that first women’s rights convention, the Declaration of Sentiments was introduced. It was based on the Declaration of Independence and included 12 resolutions related to women’s rights, the most controversial being the call for women’s suffrage. Ultimately, 68 women and 32 men, including Frederick Douglass, an abolitionist and ardent supporter of women’s suffrage, would sign the declaration. The notion that women would seek any type of equality to men, especially the vote, was met with ridicule.

“From the beginning the country has been a patriarchal society,” notes Dr. Livingston Adams. “In an all male electorate with wealthy men in power, why would they want to expand the franchise?”

Men definitely made their displeasure about women’s desire for the vote known. Dr. Deirdre Foreman, a Sociology professor at Ramapo College of New Jersey, points out that both political parties at the time were against women’s suffrage. Dr. Foreman believes that voting and politics represent power and men did not want to share.

A 1913 New York Times editorial stated: “The New York Times does not believe that the achievement of woman suffrage will increase the happiness or the prosperity of women in America.” A later, 1915 editorial in the newspaper stated: “Without the counsel and guidance of men, no woman ever ruled a state wisely and well.”

Why was there such resistance in allowing half of the nation’s citizens to vote? Lucienne Beard, executive director of the Alice Paul Institute, a women’s rights organization named after a well-known suffragist, says the popular culture version, put forward by men at the time, was that women weren’t competent and had smaller brains, they would be corrupted by politics, or because polling places were typically held in places too rough for women, like saloons and men’s clubs.

Beard notes, however, that there was another reason for resistance and that is because women were leading the Temperance Movement, a social movement against alcohol consumption, which led to Prohibition and the 18th Amendment. The Woman’s Christian Temperance Union (WCTU) was a loud voice in the fight for women’s suffrage, which prompted liquor companies and the United States Brewers’ Association to fund the anti-suffrage movement.

Dr. Livingston Adams says the Temperance Movement was an interracial and interclass movement where women “began to think politically, believing they had a place in the political sphere.”

Some states granted women the right to vote before the 19th Amendment’s passage. In 1869, Wyoming, which was then just a territory, was the first to introduce full women’s suffrage as a way to entice women to the frontier states. That’s why Wyoming is nicknamed the Equality State and its motto is Equal Rights. By the time the 19th Amendment went to the states for ratification, women had full voting rights in 15 states.

In the Garden State, women actually had the right to vote when the country was first founded. The original New Jersey Constitution (1776) stated: “all inhabitants on this Colony, of full age, who are worth fifty pounds…shall be entitled to vote.” Because the requirement didn’t mention gender or race, women and freed slaves were allowed to vote (as long as they met the property requirement). Eventually, after a dispute over a courthouse and allegations of voter fraud, which were blamed on women and Black men, the New Jersey Legislature adopted new voting laws in 1807, disenfranchising all but white males.

Members of the Women’s Suffrage Movement were devoted abolitionists, speaking out against slavery and demanding passage of the 13th Amendment to abolish it. However, when Congress proposed the 15th Amendment, giving Black men the right to vote without also including women, some in the Women’s Suffrage Movement vehemently opposed it. According to Dr. Livingston Adams, that’s when the cracks of racism, which “had always been there,” started to show.

Cady Stanton, in the newspaper she and Susan B. Anthony had founded, argued that if universal suffrage was not possible then educated women should have preference over Black men. She wrote, “If women find it hard to bear the oppressive laws of a few Saxon Fathers, of the best orders of manhood, what may she not be called to endure when all the lower orders, native and foreigners, Dutch, Irish, Chinese and African, legislate for her and her daughters?”

Although Cady Stanton, Anthony and Frederick Douglass were friends, and he would remain a staunch advocate for women’s suffrage, he did not agree with their view that Black men should wait for universal suffrage.

Arguing for Black men to get the ballot first, Douglass said, “When women, because they are women, are hunted down through the cities of New York and New Orleans; when they are dragged from their houses and hung upon lampposts; when their children are torn from their arms and their brains dashed out upon the pavement; when they are objects of insult and outrage at every turn; when they are in danger of having their homes burnt down over their heads; when their children are not allowed to enter schools; then they will have an urgency to obtain the ballot equal to our own.”

Alice Paul, a New Jersey native, led the more radical National Woman’s Party (NWP). Members of NWP picketed outside the White House, the first time that had ever been done. Six days a week for more than two years, Paul’s “Silent Sentinels,” as they were called, would hold signs that addressed the President, saying, “How Long Must Women Wait for Liberty” and “What Will You Do for Woman Suffrage.” The women, including Paul, were often arrested and many would go on hunger strikes while in jail to garner media attention for the cause.

After one of her arrests, Paul reportedly told the judge, “As members of the disenfranchised class, we do not recognize the court established by a police officer from whose election women were excluded. We do not admit the authority of the court, and we shall take no part in the court’s proceedings.”

In 1913, Paul organized one of the most famous protest marches, purposely held in the nation’s capital the day before Woodrow Wilson’s inauguration. Thousands of women marched down Pennsylvania Avenue demanding their right to vote. More marches would follow this one, including one in New York City in 1915.

Racism reared its ugly head again during the Washington, DC march. Bowing to the concerns of Southerners, African American suffragists were told they had to march together in an all-black assembly at the end of the parade. Ida B. Wells-Barnett, a noted Black suffragist and respected journalist, who co-founded the NAACP, refused to do so and demanded to march with the Illinois contingent that she had traveled with. When her demand was rebuffed, Wells-Barnett took matters into her own hands and waited along the parade route joining the Illinois delegation as it passed.

Paul’s more militant tactics, learned while studying abroad in London, didn’t go over well with some women in the movement, including NAWSA, led by Carrie Chapman Catt, who eventually won the support of President Woodrow Wilson to the cause.

After the 19th Amendment was ratified, Alice Paul said, “Suffrage was not won by the Democratic or Republican party, in the last analysis, but by women themselves…It was won by the thousands of women who sacrificed health and careers, who suffered physical violence and every other indignity, even to imprisonment, in the long, weary struggle to secure that freedom which should belong to every one of our citizens.”

It was a 72-year journey for the 19th Amendment and not everyone benefited. While the amendment gave African American women the vote, if they lived in the South, state laws disenfranchised most.

Dr. Livingston Adams calls the 19th Amendment a “great demonstration of democracy,” but says its achievement should be balanced with the realization that classism and racism still exist today because as a nation we haven’t come to terms with these issues.

Glossary Words
abolitionist: someone who opposes slavery.
electorate: all the people in a country who are entitled to vote.
franchise/suffrage: the right to vote.
patriarchal: relating to a system of society or government controlled by men.
ratification: the action of formally signing a contract or agreement to make it official.
referendum: the referral of a measure proposed or passed by a legislative body to the voters for approval or rejection.
temperance: not drinking alcohol.