Almost a Century Later the Battle to Ratify the ERA Continues 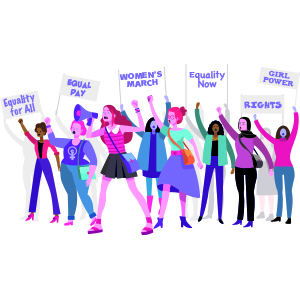 The Equal Rights Amendment (ERA), originally written in 1922, has yet to be ratified. Despite widespread public support for an amendment to the U.S. Constitution that spells out equal treatment for women, the ERA remains stuck in a tangle of procedural and constitutional questions in Congress.

The proposed amendment states: “Equality of rights under the law shall not be denied or abridged by the United States or by any state on account of sex. The Congress shall have the power to enforce, by appropriate legislation, the provisions of this article.”

While the ERA was proposed in 1923, soon after women gained the right to vote, the legislation languished for decades until the women’s rights movement of the 1960s and 70s reinvigorated the fight. In 1972, it finally passed in both houses of Congress. In the amendment’s preamble, Congress imposed a seven-year deadline for ratification by three-fourths (38) of the states.

Under Article V of the U.S. Constitution, an amendment becomes part of the Constitution when three-fourths of state legislatures support it. Article V does not specify any timeline for ratification.

By 1979—the original deadline—only 35 states had ratified the amendment. Congress then extended the time limit for another three years. However, by 1982, the ERA hadn’t received any more state ratifications, stalling at 35.

In recent years interest in the ERA has undergone a revival. In 2017, Nevada’s Legislature endorsed it, followed by Illinois in 2018, and Virginia in January 2020. With Virginia’s endorsement, the ERA achieved the 38 votes needed for ratification; however, it has yet to be officially added to the U.S. Constitution as legislators wrangle over whether the amendment can be passed so far past the deadline.

Where the ERA stands now

In February 2020, the House of Representatives passed a resolution to remove the deadline for passage of the ERA. A similar bipartisan bill has been introduced in the Senate. At press time, the Senate had yet to vote on the bill. Senate Leader Mitch McConnell has stated he is “personally not a supporter” of the amendment, so chances of it coming to a vote are likely slim without a change in Senate leadership.

With passage in the Senate in doubt, the ERA was dealt another significant setback in January 2020 when the Department of Justice’s Office of Legal Counsel declared ratification could not take place because the deadline had passed. Complicating the question further is the fact that five states—Idaho, Kentucky, Nebraska, Tennessee and South Dakota—had rescinded their previous approval of the ERA in the late 1970s.

In July 2020, attorneys general from Nevada, Illinois and Virginia filed a lawsuit in the U.S. District Court of the District of Columbia asking the court to override the DOJ opinion and recognize their ratification votes. The lawsuit stresses that Article V of the U.S. Constitution places no time limit for ratification and points to the ratification of the 27th Amendment to the U.S. Constitution. That amendment, which mandates that pay raises for Congress members can only be instituted after an election, was first proposed in 1789 and eventually ratified in 1992.

“That is what we saw in January when the House of Representatives did in fact pass a resolution to officially remove the time limit for the ERA,” says Krista Joy Niles, Outreach and Civic Engagement Director at the Alice Paul Institute, a nonprofit organization dedicated to advancing women’s rights.

The organization is named after suffragist Alice Paul, who grew up in Moorestown, New Jersey. In 1922, Paul drafted the language of the original ERA amendment.

ERA advocates currently see two strategies for ratification—either have Congress recognize the three recent ratifying states even after the lapsed deadline, or start the process over again.

Jenny-Brooke Condon, a professor at Seton Hall Law School’s Center for Social Justice, says it’s unclear whether Congress can extend the time limit after the original deadline has lapsed.

“I think Congress would have the power to set an entirely new deadline, which is another proposal being advanced by members of Congress, and start the process for ratification again,” Professor Condon says. “Obviously that would mean starting over when you had 35 states at the time of the original deadline.”

In addition, there’s the matter of the five states that have rescinded their approval for the ERA. Can Congress recognize their rescissions or count their prior votes in support of the amendment?

Professor Condon points to the 14th and 15th Amendments. Both became part of the U.S. Constitution even after some states tried to rescind their previous approval. In both those cases, Professor Condon notes that Congress ignored the states’ request to rescind and moved forward with the ratification process.

“What’s complicated about this issue is that you have two barriers,” Professor Condon says. “You have states that have rescinded and you have three states that ratified the amendment after the original deadline had lapsed. So there are many uncertain legal questions about the ratification process.”

You may think the U.S. Supreme Court would decide these legal questions. However, Professor Condon says that under what is known as the political question doctrine, the Court likely will pass on questions it feels are better left for Congress to decide.

That’s essentially what the Supreme Court said in 1939, when presented with the Kansas case of Coleman v Miller. The Kansas Legislature had rejected a constitutional amendment against child labor, but later approved it. Opponents of the amendment sued to have the passage overturned. The Supreme Court ultimately ruled Congress has the authority over the ratification process and timeline. Like the ERA, the child labor law amendment has yet to become part of the U.S. Constitution.

So, Professor Condon contends that Congress will likely have the final word on the ERA’s passage.

“I could imagine Congress seeing that there is a good opportunity to restart the ratification process,” she says.

“I would like to start over,” she told the audience at a law conference in February 2020. “There is too much controversy about latecomers [like] Virginia long after the deadline passed. Plus, a number of states have withdrawn their ratification. So if you count a latecomer on the plus side, how can you disregard states that said, ‘We have changed our minds’?”

Despite the legal questions surrounding the ERA’s passage, Professor Condon stresses there is strong public support for the amendment. A Pew Research poll released in July 2020 found that nearly 80 percent of Americans support the ERA.

“It would be unfortunate for these procedural complications to stand in the way of the desire on the part of the majority of Americans to have such an amendment,” she says.

Why the ERA is still needed

“It matters because your Constitution purports to be the source of equality and yet does not expressly elevate gender or sex as worthy of protection,” Professor Condon says. “And that trickles down and shapes women’s status within the political, public and private spheres.”

Even though Congress and states can pass anti-discrimination laws, those same laws can be repealed or weakened by the courts, Niles says.

“Until the ERA is passed and the U.S. Constitution states all citizens regardless of sex are offered equal protections under the law, then it remains to the courts to decide how those protections offered under the 14th amendment are applied to case law,” Niles says.

Niles also stresses that the ERA would benefit both men and women.

“It would apply to all citizens,” she says. “It offers men equal protection so they’re also getting equal pay, equal paternity leave, or equal time off to care for an aging or ill parent.”

A constitutional amendment would also compel courts to consider sex discrimination cases with the same heightened scrutiny as racial discrimination lawsuits and override some state laws.

“If you have a federal constitutional commitment to gender-based equality,” Professor Condon explains, “you eliminate this patchwork of laws based upon where a woman lives so that women may have greater rights in some states over others.”

Glossary Words
bipartsan: supported by two political parties.
ratification: the action of formally signing a contract or agreement to make it official.
repealed: revoked. A law that has been repealed has been withdrawn or canceled and is no longer a law.
rescind: revoke, cancel or repeal.