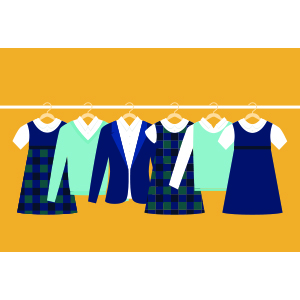 School dress codes have existed for decades. Today, according to statistics, across the nation 46 percent of primary schools, 70 percent of middle schools and 55 percent of high schools follow strict dress codes.

Critics think dress code policies generally target girls. In one Massachusetts high school, for example, six of the nine dress code regulations specifically address female students, according to an article in NEA Today. An informal survey conducted by NEA Today found that teachers generally support dress codes, claiming they prepare students for how to present themselves in the real world. However, one teacher pointed out that the language used in these policies is key.

“I think dress codes should exist, as a way to note that school is a professional learning space and deserves respect,” Marci Farran Kutzer told NEA Today. “As long as the language of the policies focus on professionalism and high expectations for learning, and stays away from asking for modesty, all is good. When kids are told to be ‘modest,’ we are sexualizing their wardrobes, and why are we doing that to children?”

Kutzer, a fourth-grade teacher in Nevada, told the educational publication in a follow-up story that the message female students receive is: “A boy’s education can be compromised by your gender. Please do what you can to neutralize it.”

In 2015, Maggie Sunseri, a Kentucky high school student produced a short documentary for a film class called Shame: A Documentary on School Dress Code. In the film, Sunseri interviewed many of her female classmates who talked about the toll that contending with their school’s dress code takes on them. With rules against wearing tops that show their collarbones, requirements that their shoulders are to be covered and that shorts have to come to the knee, buying clothes is a challenge. The students in the film expressed frustration when they see the boys in their school given warnings, but the girls are told to report to the main office where parents are called to bring alternate clothing.

One student in the film said the inequality affects their self-esteem and makes them feel judged and shamed, and it sends the message to boys that “it’s all the girls’ fault.” Many of the girls in the film pointed out that by taking a girl out of class for minor infractions, coupled with the inconsistency of the policy, the message is that the importance of a female student’s education is less than a male’s.

This double standard plays out across the country and moved four middle school students from Maplewood-South Orange, NJ to create the hashtag campaign, #IAmMoreThanADistraction in 2014. According to NEA Today, the campaign challenges schools “to focus their attention on reducing objectification of the female body.”

One tweet using the hashtag reads: “When you interrupt a girl’s school day to force her to change clothes, or send her home because her shorts are too short or her bra straps are visible, you are telling her that making sure boys have a ‘distraction free’ learning environment is more important than her education.”

The students in Sunseri’s documentary also point out that the message is insulting to boys, implying that they can’t control themselves and lack discipline. The good news for students attending Sunseri’s Kentucky high school is that because of her film, the school’s administration agreed to update its 11-year-old dress code policy and allow for student input, making the policy more equitable.

Equal treatment is all a trio of North Carolina mothers wanted for their daughters. They went to court to get it, suing their children’s public charter school over its dress code policy. The lawsuit, filed by the American Civil Liberties Union (ACLU) of North Carolina on behalf of the mothers and students, claimed the school’s requirement that female students wear skirts discriminates against girls. Filed in North Carolina federal court, the lawsuit contended the clothing mandate violated the 14th Amendment’s Equal Protection clause (designed to protect against racial and sexual discrimination) as well as Title IX of the Education Amendments of 1972.

According to the lawsuit, the skirt requirement was, among other things, distracting girls from learning since they had to “pay constant attention to the positioning of their legs during class” and sometimes would “avoid certain activities altogether, such as climbing or playing sports during recess, for fear of exposing their undergarments and being reprimanded by teachers or teased by boys.” In addition, the suit stated that the skirt requirement “sends a message that their comfort and freedom to engage in physical activity are less important than those of their male classmates.”

Created with parental input in 1999, the school’s uniform policy required girls wear only “skirts, skorts, or jumpers” and male students don shorts or pants.” The mothers noted they were not opposed to Charter Day School’s right to dictate classroom attire; their only grievance is with the dress code’s skirt provision and wanted their daughters to be allowed to wear pants. The ACLU argued the skirt rule is based on unlawful gender stereotypes and has harmful implications on girls’ academic development.

School administrators, however, denied the ACLU’s learning impediment allegation, noting the skirt requirement does not prevent female students from attending school, participating in class/activities, or learning. Through its attorney, the school claimed the logic behind Charter’s uniform policy is to foster a sense of pride and team spirit, and cultivate a learning environment that supports “respectful, dignified student relationships.”

The school’s attorney also noted that the dress code was not a violation of Title IX.

While a federal judge agreed with the school’s attorney on the Title IX point, noting that the law does not specifically address school uniform policies or appearance codes, the judge did rule the dress code violated the 14th Amendment.

In rendering his March 2019 decision, U.S. District Court Judge Malcolm J. Howard observed that females have been allowed to wear trousers or pants “in all but the most formal or conservative of settings” since the 1970s.

“Yes, the boys at this school must conform to a uniform policy as well,” Judge Howard wrote in the court’s opinion. “But plaintiffs in this case have shown that the girls are subject to a specific clothing requirement that renders them unable to play as freely during recess, requires them to sit in an uncomfortable manner in the classroom…distracts them from learning, and subjects them to cold temperatures on their legs…Defendants have offered no evidence of any comparable burden on boys.”

Judge Howard also said Charter’s board failed to provide evidence that boys treat girls differently on days (or times) they are not wearing skirts.

“A public school can draw distinctions based on sex but those distinctions must be justified by important reasons and be closely connected to achieving those important goals,” says Sarah E. Ricks, a professor at Rutgers Law School—Camden and a former board member of the Women’s Law Project. “The trial court didn’t outright reject the school’s reasons. Instead, the court found that, even if the school’s goals of instilling discipline and promoting mutual respect were legitimate, the school showed ‘no connection’ between those goals ‘and the requirement that girls wear skirts.’”

Judge Howard also wrote, “It is not the holding of this court that dress, grooming and uniform policies cannot have differences for boys and girls, but the skirt requirement causes the girls to suffer a burden the boys do not, simply because they are female.”

As for the plaintiffs in the case, Bonnie Peltier, one of the mothers, said in a statement after the decision was handed down: “All I wanted was for my daughter and every other girl at school to have the option to wear pants so she could play outside, sit comfortably and stay warm in the winter. We’re happy the court agrees, but it’s disappointing that it took a court order to force the school to accept the simple fact that, in 2019, girls should have the choice to wear pants.”

Charter Day School amended its skirts requirement for girls in April 2019; however, at press time, the school is appealing the court’s decision.