Hard to Be A Woman and More Expensive Too 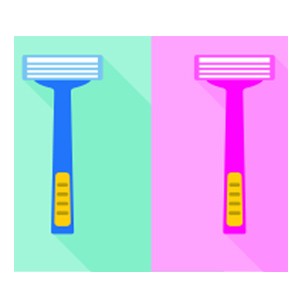 While women have made great strides over the past 100 years, they haven’t achieved full equality in society. A woman still only earns about 80 cents for every dollar a man earns.

According to a report published by the office of New York Congresswoman Carolyn B. Maloney, that disparity is even greater for women of color—63 cents for African American women and 54 cents for Hispanic women. The report revealed that “over the course of a woman’s life, the gender pay gap can cost more than half a million dollars in lost income, savings and retirement benefits.”

The gender pay gap is not the only way women have it tougher. They also contend with what is known as the pink tax, an extra cost on many products and services that women, and only women, pay. The differences are often small for individual items, like razors, but when added together, it can amount to well over $1,000 a year. When you combine the pink tax with the gender pay gap, there is no doubt that it is much more expensive to be a woman.

In 2015, the New York City Department of Consumer Affairs released a report that compared the prices of 794 products produced by 91 brands throughout the city. The report revealed that women and girls pay an average of seven percent more for products than men and boys. The costs for females averaged eight percent more for clothing, seven percent more for toys and 13 percent more for personal care items. Sometimes the difference in products was merely the pink coloring aimed to attract females. In September 2020, New York’s proposal to ban the pink tax was instituted. The measure requires service providers to have produce a price list for standard services upon request and makes it clear that gender-based price discrimination is prohibited under New York state law.

Women also have to deal with what is known as the tampon tax, an offshoot of the pink tax. The tampon tax is a term used to describe the tax on menstrual hygiene products. The term doesn’t suggest that there is an extra tax on these products, but points out that they are thought of as luxury items so they are not tax-exempt. Critics of taxing menstrual products, like tampons, liners and pads, argue that they should be categorized as medical supplies, which are tax-exempt.

“Every time another exemption is passed, it means the tax rate that applies to everything else will have to increase in order to generate that same amount of revenue,” Katherine E. Loughead, a policy analyst at the Tax Foundation, told The New York Times.

On the basis of sex

Mikayla R. Berliner, a Board member of Seton Hall Law School’s Women’s Law Forum, is a third-year law school student and author of the article, “Tackling the Pink Tax: A Call to Congress to End Gender-Based Price Discrimination,” which will be published in the fall 2020 edition of The Women’s Rights Law Reporter.

Technically, charging higher prices on the basis of sex is completely legal, Berliner explains. “Sex discrimination is only illegal in certain contexts, such as employment, housing and education. In the marketplace, private sellers are largely free to charge higher prices.”

While gender-based pricing may not be illegal, Berliner contends that it is unfair and largely goes unnoticed.

“Women who are unaware of the pink tax do not realize they are paying more for razors, shaving cream, children’s toys, etc. just because they are pink,” she says.

When women go to a drug store or supermarket, they tend to go straight to the women’s section to buy whatever products they need, Berliner says, without seeing how the prices compare to similar men’s products and have no idea they are paying more for essentially the same item.

“Something women can do about the pink tax is learn more about it and understand when it applies to a product,” Berliner says. “With this knowledge, they can actively choose to support brands that work to eliminate the pink tax, like Billie Razors or the European Wax Center, which started the ‘Axe the Pink Tax’ campaign.”

To spread awareness, consumers can also take photos and post on social media using #PinkTax when they see gender-based price differences in action, Berliner says. The negative exposure, she says, will hopefully make companies think twice before they raise the price of women’s products.

Some women’s groups have also suggested buying men’s products or boycotting manufacturers as a form of pink tax protest. But Berliner thinks that consumers who want to express their femininity by purchasing pink products, wearing floral deodorants, or otherwise using traditional women’s products should not have to choose between expressing themselves and paying less.

“People choose to express their gender identities in a variety of ways. Consumers do not fit neatly into traditionally masculine products or traditionally feminine products,” Berliner says. “Consumer preferences vary greatly and the choices available in the stores should reflect this variety without unfairly charging some people more than others.”

Here are some questions to consider, she says. Are women’s colors and scents more difficult to manufacture than men’s scents? If an advertising campaign is marketed to women, is it automatically more costly? Berliner says the answer is no on both counts.

“Companies have found a way to exploit the market to make a profit without anyone noticing,” she says. “Two razors that may be identical except for their color might be packaged in such a way that the consumer cannot figure out that they are identical. Plus, men’s and women’s products are placed in different aisles in the store…Buyers just grab whatever they think they are supposed to use based on their gender and they move along with their day. This practice has been going on for generations and it causes women to pay thousands more than men over the course of their lifetimes.”

It is not only products that can carry a pink tax. Services such as dry cleaning and haircutting can also be affected. Berliner says that those services should be priced based on the amount of time and effort they take, not based on the customer’s perceived gender. She notes that California is the only state that has made it illegal for service prices to be based on gender.

The best way to eliminate the pink tax is to spread awareness and support federal legislation that makes it illegal, according to Berliner.

California Congresswoman Jackie Speier has tried to level the playing field. Over the last few years, she has introduced a bill in the U.S. House of Representatives called the Pink Tax Repeal Act.

The purpose of the Act is to: “Prohibit the pricing of consumer products and services that are substantially similar if such products or services are priced differently based on the gender of the individuals for whose use the products are intended or marketed or for whom the services are performed or offered.”

Substantially similar products or services means that the materials, the intended use and the design are generally the same, as is the time it takes to provide the service.

The Pink Tax Repeal Act failed to advance in 2016 and 2018, but it is again before the House as H.R. 2048. The bill was first referred to the Committee on Energy and Commerce and then to the Subcommittee on Consumer Protection and Commerce, where, at press time, it still sits.