Settling the Question of Faithless Electors 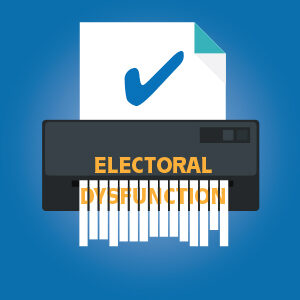 On November 3, 2020, Americans will once again cast their ballots in a presidential election. Those ballots will be cast, not directly for a presidential candidate, but for a slate of electors who will gather as part of the Electoral College to cast ballots that represent the will of the people in their state.

But what if those electors ignore the wishes of the voters and vote for the candidate of their choice—one that didn’t receive their state’s popular vote? That is what is known as a “faithless elector.”

In Chiafalo v. Washington, the U.S. Supreme Court was asked to decide whether states should be allowed to punish faithless electors. In July 2020, the Court unanimously agreed that states have the power to enforce faithless elector laws, which prohibit Electoral College electors from supporting a candidate who did not win the majority of votes in their state. The decision was handed down in response to two separate lawsuits from the states of Washington and Colorado.

The Electoral College was established during the Constitutional Convention of 1787. The debate at the time was whether members of Congress should elect the president or whether the people should elect the president directly. In a compromise suggested by Alexander Hamilton, the United States has the Electoral College system, which is still in use today.

The way it works is that each state is awarded a certain number of Electoral College electors. The number is based on a state’s total count of representatives and senators in the U.S. Congress. For instance, New Jersey has 14 electors because the state has 12 representatives and two senators. Each political party (Republican and Democrat) at the state level nominates a slate of electors and whichever candidate wins the state’s popular vote, that party’s electors officially cast the votes in the Electoral College in December.

The laws governing who can be nominated as electors vary from state to state, but they are typically those who are loyal to their political party. Because they are party loyalists, electors rarely break from the popular vote winner in their state. In fact, faithless electors have never had a deciding impact on the outcome of an election.

According to Fairvote.org, a nonpartisan organization that advocates for electoral reform, 23,507 electoral votes have been cast over 58 presidential elections. Since 1796, only 90 electors have deviated from casting a ballot for their state’s popular vote choice. In some of those cases, the deviation was because the candidate had died after the election.

In the 2016 presidential election, 10 electors from six states strayed from their designated task, swinging their support to a candidate that wasn’t even in the race for the presidency. When several of those faithless electors were punished or replaced, they filed lawsuits that eventually ended up before the U.S. Supreme Court.

In Colorado, one Democratic elector, Michael Baca, replaced the name of the state’s presidential winner—Hillary Clinton—writing in John Kasich, the former Ohio governor who had run for the Republican nomination.

Colorado’s Secretary of State removed Baca from his post and replaced him with an elector who voted for Clinton. Baca sued the Colorado Department of State, arguing the U.S. Constitution gave him the right to vote his conscience. The U.S. Court of Appeals for the 10th Circuit sided with Baca.

“Electors, once appointed, are free to vote as they choose,” Judge Carolyn B. McHugh wrote in the lower court’s opinion. “While the Constitution grants states plenary power to appoint electors, it does not provide the power to interfere once voting begins…”

Instead of voting for the popular vote winner (again Hillary Clinton) three Democratic electors in Washington State cast their votes for others. Each elector was fined $1,000. The faithless electors sued, but the Washington State Supreme Court upheld the fines.

Both the Colorado decision and the Washington State decision were appealed to the U.S. Supreme Court. Arguing before the Court, Washington’s Solicitor General, Noah Purcell, said the Constitution “gives states the power to appoint electors, and that power has always included the power to set conditions on appointment.” Colorado’s Attorney General Philip Weiser argued that without the power to regulate electors, states wouldn’t have a mechanism to remove an elector who may have been bribed or coerced to vote for a particular candidate.

Harvard Law School Professor Lawrence Lessig, speaking on behalf of the Washington State electors, argued that while states have the right to appoint electors, the Constitution gives electors the right to vote as they choose.

Currently, 32 states and the District of Columbia have faithless elector laws on the books. All require voting for the pledged candidate that won the popular vote in the state. Among those 32 states, five impose a penalty for noncompliance; 16 states and the District of Columbia don’t impose a penalty; and 14 states allow the faithless elector to be replaced.

What the Court decided

Justice Elena Kagan, who wrote the majority opinion for the U.S. Supreme Court, said states can hold electors to their pledge to vote for the candidate they had promised to support. Further, she wrote that states “can demand that the elector actually live up to his pledge, on pain of penalty.”

As Justice Kagan pointed out, the Constitution is “barebones” about electors, noting that the Electoral College is only mentioned twice.

“Those sparse instructions,” Justice Kagan wrote, “took no position on how independent from—or how faithful to—party and popular preferences the electors’ votes should be.” Therefore, the Constitution “doesn’t expressly prohibit states from taking away presidential electors’ voting discretion.”

Jack M. Beermann, a professor at Boston University School of Law and an expert on state and local government, explains the Court is saying that since the U.S. Constitution gives states the power to appoint, they also have the right to set the condition for that appointment.

“Because the selection is up to the states, any sort of supervision is also a matter for the states,” Professor Beermann says.

In a statement released after the Court’s decision, Professor Lessig said, “When we launched these cases, we did it because, regardless of the outcome, it was critical to resolve this question before it created a constitutional crisis. Obviously, we don’t believe the Court has interpreted the Constitution correctly. But we are happy that we have achieved our primary objective—this uncertainty has been removed.”

Before the Court’s clarification on the matter, there had been an argument, promoted by legal scholars, that Electoral College electors are free agents. The reasoning is attributed to Alexander Hamilton, who wasn’t a fan of letting the people vote directly for president. Hamilton felt the masses would be susceptible to electing a president with “the talents for low intrigue and the little arts of popularity,” meaning he thought the average citizen might fall for a politician’s empty promises.

In the Federalist Papers, a series of essays written in support of the ratification of the U.S. Constitution, Hamilton wrote, “A small number of persons, selected by their fellow-citizens from the general mass, will be most likely to possess the information and discernment requisite to such complicated investigations.”

Hamilton’s words have been interpreted to mean electors are free to vote as they desire and are not bound to a state’s popular vote.

Justice Kagan addressed the “free agent claim,” writing, “In practice electors are not free agents; they are to vote for the candidate whom the state’s voters have chosen.”

Professor Beermann says the recent Supreme Court ruling could provide a boost to a movement that would elect the president via national popular vote. The National Popular Vote Interstate Compact (NPVIC) is an initiative to support the presidential candidate who garners the most votes nationwide.

If the NPVIC succeeds, Professor Beermann notes that some states will be giving their electoral votes to a candidate who gets fewer votes. While he says that seems odd, he points out that the recent ruling seems to leave these matters up to the states and also notes that “[presidential] elections happen state by state rather than one big national election.”

Glossary Words
appealed— when a decision from a lower court is reviewed by a higher court.
nonpartisan— not adhering to any established political group or party.
plenary power—complete and absolute power to take action on a particular issue.