Long-Awaited Decision Not a Piece of Cake 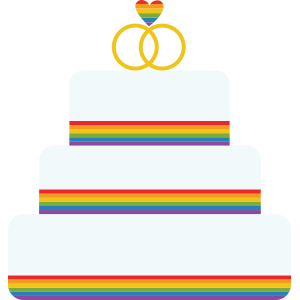 Freedom of religion is a hot button issue for most Americans, and so is the protection of LGBTQ rights. So when the U.S. Supreme Court agreed to hear Masterpiece Cakeshop vs. Colorado Civil Rights Commission, a case in which a Colorado baker declined to bake a cake for a same-sex couple on religious grounds, advocates on both sides of the issue eagerly awaited the decision.

The U.S. Supreme Court issued its ruling on June 4, 2018. Although the decision was 7-2 in favor of the baker, it was narrow in its applicability. In his majority opinion, now-retired Justice Anthony Kennedy pointed to what he interpreted as a negative bias toward the baker’s religion expressed by a member of the Colorado Civil Rights Commission.

While ruling for the baker, Justice Kennedy, a champion of LGBTQ rights, emphasized his support for laws prohibiting discrimination based on sexual orientation. For the most part, the decision left unanswered the main question of whether sincerely held religious beliefs allow for discrimination.

The Masterpiece case began in 2012 when David Mullens and Charlie Craig asked baker Jack Phillips to create a cake for their wedding, which was to take place in Massachusetts since Colorado at the time did not allow for same-sex marriage. Phillips declined, saying his religious principles prevented him from supporting same-sex marriage.

Mullens and Craig sued the baker, arguing that Phillips discriminated against them based on their sexual orientation, which is prohibited under Colorado’s public accommodations law. The Colorado Civil Rights Commission agreed and fined the baker. The Colorado Court of Appeals also sided with the couple and the Commission, finding the baker had been guilty of discrimination.

In its ruling against Phillips, the Colorado Court of Appeals stated: “Masterpiece [Cakeshop] does not convey a message supporting same-sex marriage merely by abiding by the law and serving its customers equally.”

Phillips and his attorneys from Alliance Defending Freedom, a conservative Christian nonprofit, took the case to the U.S. Supreme Court, arguing that being forced to bake a cake against his religious principles violated the First Amendment’s guarantee of the free exercise of religion, as well as the freedom of expression.

In a brief submitted to the U.S. Supreme Court, Phillips’s lawyers said that Phillips “declines lucrative business by not creating goods that contain alcohol or cakes celebrating Halloween and other messages his faith prohibits, such as racism, atheism and any marriage not between one man and one woman.” The brief also pointed out that the couple easily obtained their cake from another baker.

The lawyer for the couple stated, “It is no answer to say that Mullins and Craig could shop somewhere else for their cake, just as it was no answer in 1966 to say that African American customers could eat at another restaurant.”

In the end, the issues of discrimination and First Amendment rights didn’t play a major role in the Court’s ruling. Instead, the comments of one commissioner appeared to be the basis of Justice Kennedy’s opinion.

Commissioner Heidi Jeanne Hess reportedly said, “Freedom of religion, and religion has been used to justify all kinds of discrimination throughout history, whether it be slavery, whether it be Holocaust.”

That comment alone was enough for Justice Kennedy to write in the Court’s majority opinion, “The neutral and respectful consideration to which Phillips was entitled was compromised here. The Civil Rights Commission’s treatment of his case has some elements of a clear and impermissible hostility toward the sincere religious beliefs that motivated his objection.”

Angela Carmella, a professor at Seton Hall University School of Law, who teaches courses on religion and the First Amendment, says the outcome of the Masterpiece case likely came about because the Court dealt first with how the Colorado Civil Rights Commission handled the case. The Court had to study how the commission processed the case before they could move on to the larger issues, she explains. “Almost every justice expressed concern for both sides and admitted the difficulty of the substantive issue, but they still didn’t reach the merits,” Professor Carmella says. “Seven justices could agree that there had been a failure of fair process before the Colorado Commission. That fair process is a threshold requirement before getting to the merits.”

Two Justices—Ruth Bader Ginsberg and Sonia Sotomayor—did not agree with the majority opinion.

overcome Phillips’ refusal to sell a wedding cake to Craig and Mullens,” Justice Ginsberg wrote in her dissenting opinion. She also added that she agreed with parts of the majority opinion. This is because although he ruled for the baker’s side, Justice Kennedy made clear his continued support for LGBTQ rights.

“Our society has come to the recognition that gay persons and gay couples cannot be treated as social outcasts or as inferior in dignity and worth,” Justice Kennedy wrote in Masterpiece. “For that reason the laws and Constitution can, and in some instances must, protect them in the exercise of their civil rights.”

The Supreme Court’s decision set off debate in the legal community about the significance of the decision. Advocates for gay rights and those who support freedom of religion saw language in the majority opinion that could be seen as favoring both sides.

The decision was “the best possible outcome that could have also held for the baker,” says Katie Eyer, who is a professor at Rutgers Law School—Camden and an LGBTQ rights advocate and scholar.

“There is certainly language in the decision that suggests that for the most part, state anti-discrimination laws extending rights to the LGBTQ community serve important governmental purposes and can be applied even in context where they may conflict with religious rights,” Professor Eyer says.

Professor Carmella thinks both sides could claim victory. While the Court backed gay rights laws, it also warned governments not to express any hostility toward religion.

“Government has no authority to voice opinions or judgments about religious beliefs or to tell people or religious communities what they should believe,” Professor Carmella says. “Of course, government can regulate conduct, but it cannot do so on the basis of animus toward a faith.”

Baker back in court

Since the Court’s decision, Phillips and the Colorado Civil Rights Commission found themselves at odds again over the baker’s refusal to create a cake celebrating a gender transition, leading the Commission to find “probable cause” that he violated anti-discrimination laws.

In a federal lawsuit, Phillips stated “the status of being male or female … is given by God, is biologically determined, is not determined by perceptions or feelings, and cannot be chosen or changed.” Phillips contends that he is being targeted and alleges the state is interfering with his First Amendment right to practice his faith.

So, what would happen if another case went before the Supreme Court? Professor Eyer says she believes the Masterpiece decision would have little impact on a second lawsuit involving the baker.

“The Court has made clear that prior expressions of bias don’t necessarily taint future actions,” she says. “If [Phillips] chooses to engage in the same conduct in the future that is a new instance of discrimination, the state is free to adjudicate that claim. If they do it without bias then under the reasoning of the opinion, it seems likely it would be upheld.”

Although the Court avoided the larger questions of anti-gay discrimination and religious freedom of expression, the legal arguments made before the Court may serve as a guide to what each side may claim in a similar lawsuit, Professor Carmella says.

Respectful of both sides

Legal observers agreed that the message the Court sent with the Masterpiece decision was to be respectful of both sides in an increasingly contentious debate.

“The outcome of cases like this in other circumstances must await further elaboration in the courts,” Justice Kennedy wrote, “all in the context of recognizing that these disputes must be resolved with tolerance, without undue disrespect to sincere religious beliefs, and without subjecting gay persons to indignities when they seek goods and services in an open market.”

The Court also appeared to be telling judicial bodies to hear these types of cases without any hint of bias toward a person’s faith, Professor Carmella says.

“With increasing polarization on so many topics in our national civil discourse, perhaps the justices focused attention on how that polarization was affecting the commission’s process,” she says. “Seven justices felt the need to remind government actors everywhere that neutrality toward religion is required under the Constitution.”

Professor Eyer agreed. “I do think it’s valuable to remind all members of the community in resolving these disputes we should be respectful of each other’s point of view,” Professor Eyer says. “I think that was the central point of the opinion, and I think that is often lacking from the discourse. In that way, it could be seen as a victory for everybody—a reminder to be respectful of each other’s sincerely held beliefs.”

This article first appeared in the fall 2018 edition of Respect. It has been updated as of May 2020.