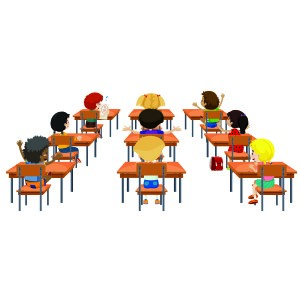 The way a disciplinary incident involving a sixth-grader was handled at a school in Florida is reflective of the racial bias that has existed in American school discipline policies for at least half a century, according to a 2018 report issued by the Government Accountability Office (GAO), a nonpartisan, independent watchdog agency that works for the U.S. Congress.

The 11-year-old had never been in serious trouble, but in February 2019 police in Lakeland, Fla. arrested him for disrupting his middle school classroom when he refused to stand for the Pledge of Allegiance. According to media reports, the student had not stood for the Pledge that whole academic year, because he deemed the salutation “offensive to black people” and the American flag “racist.” Students are not required to stand during the Pledge so it had not been a problem before.

A substitute teacher, unaware of the school district policy, confronted the student, demanding he participate. When he refused, words were exchanged and the situation escalated. The substitute contacted school administrators and a school resource officer with the Lakeland Police Department eventually arrested the youth for disrupting a school function and resisting an officer without violence. He was suspended from school for three days.

Two U.S. congressmen—Robert C. Scott of Virginia and Jerrold Nadler of New York—commissioned the GAO report, which was issued in April 2018. The report revealed that black students are disciplined more often and more harshly than their white peers, often for similar offenses.

The analysis in the GAO report also discovered evidence of racial disciplinary disparities by both grade level and type of educational institution (public, private, charter). In addition, the report stated, “black students accounted for 15.5 percent of all public school students, but represented about 39 percent of students suspended from school—an overrepresentation of about 23 percentage points.”

The GAO report is the first federal examination of school discipline policies since 2014 when the Obama administration issued guidance to educators, seeking alternatives to suspension and other penalties that remove students from classrooms. The non-binding document was issued after federal data indicated that minority students were three times as likely to be expelled or suspended, despite the fact that black and Hispanic students made up only 18 percent of public school students. The guidance also noted that suspensions correlated with higher dropout rates and lower academic achievement.

“Fair and equitable discipline policies are an important component of creating an environment where all students feel safe and welcome,” the 2014 guidance stated. “Equipping school officials with an array of tools to support positive student behavior— thereby providing a range of options to prevent and address misconduct—will both promote safety and avoid the use of discipline policies that are discriminatory or inappropriate. The goals of equity and school safety are thus complementary, and together help ensure a safe school free of discrimination.”

The Trump administration opposed the Obama-era guidance, believing it represented government overreach. Although the GAO’s findings seemed to bolster the case for preserving the 2014 guidance, U.S. Education Secretary Betsy DeVos rescinded the decree in December 2018 after nearly a year-long school safety commission probe. Secretary DeVos, who led the commission, contended that the mandate placed more importance on statistics than student safety.

“Every student has the right to attend school free from discrimination. They also have the right to be respected as individuals and not treated as statistics,” DeVos said in a statement. “In too many instances, though, I’ve heard from teachers and advocates that the previous administration’s discipline guidance often led to school environments where discipline decisions were based on a student’s race and where statistics became more important than the safety of students and teachers. Our decision to rescind that guidance makes it clear that discipline is a matter on which classroom teachers and local school leaders deserve and need autonomy.”

Racial justice groups and civil rights advocates criticized the decision to rescind the guidance, contending the move contradicts the commission’s other recommendations, which call for safe and supportive learning environments that promote strong relationships between students and teachers.

“Rescinding this important school discipline guidance signals that the federal government does not care that too many schools have policies and practices that push children of color out of school,” Vanita Gupta, president and CEO of The Leadership Conference on Civil and Human Rights, said in a statement. “Federal nondiscrimination laws have not changed. Any school with discipline policies or practices that discriminate against children based on race, ethnicity, sex or disability is still breaking the law. We urge educators and schools to implement evidence-based strategies that will create the safe, welcoming schools all of our children deserve.”

Not so black and white

Dan Battey, an associate professor at Rutgers and lead author of the study, told Education Week, “Those [students] who are being reprimanded more for behavior are often the ones who get removed from the classroom or [get] suspended.” Professor Battey said that repeated negative responses from teachers could also “stamp out students’ motivation,” causing them to shut down and stop learning.

Another older study from 2015, conducted at Stanford University also revealed disciplinary bias. In the experiment, more than 250 teachers were asked to read four school discipline reports and were told that these students had been in trouble twice, all for similar offenses. The only difference in the records was the names of the students. Two were identified with stereotypical black names (Darnell or Deshawn), the other two had typically white names (Greg or Jake). The study found that most of the teachers determined that “Darnell” and “Deshawn” warranted harsher punishment for the same misdeeds as “Greg” and “Jake.”

Montclair Board of Education administrator Davida Harewood, Ph.D., believes a better respect of cultural diversity and more accountability at all education levels can improve and perhaps someday remedy the longstanding racial disparity in school discipline.

“Increasing the cultural competence of educators and school administrators is needed,” she says. “Today we still hire a disproportionate number of young Anglo women as educators. Few are required to have taken courses to prepare them for the cultural norms of children that may be different than their own culture.”

In a commentary for Education Week, Bettina L. Love, a professor of educational theory and practice at the University of Georgia, wrote about the fact that white teachers don’t really know their black students culturally. “Let me be clear,” Professor Love wrote. “I do not think White teachers enter the profession wanting to harm children of color, but they will hurt a child whose culture is viewed as an afterthought.”

Dr. Harewood also points out that school disciplinarians are often from a racial or gender group that is in the majority and often have limited training on how to support students with different cultural norms or life experiences.

“Forcing children to leave their cultural norms at the school door and conform to the culture of ‘the other’ then disciplining them when they break the rules is not an effective strategy,” Dr. Harewood says. “More understanding of cultural norms, interactions that encourage us to see children as valuable and not problematic ‘others’ is needed.”

Glossary Words
autonomy: independence or self-rule.
nonpartisan: not adhering to any established political group or party.

This article first appeared in the spring 2019 edition of Respect.