You’ve Got Bail—If You Have the Cash 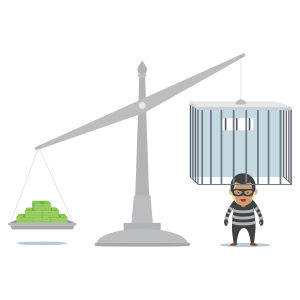 The Eighth Amendment to the U.S. Constitution states: “Excessive bail shall not be required, nor excessive fines imposed, nor cruel and unusual punishment inflicted.” Despite this provision, the U.S. has the highest incarceration rate in the world, due in part to the cash bail system.

According to the American Civil Liberties Union (ACLU), on any given day there are approximately 450,000 people across the U.S. behind bars (about 70 percent of the total jail population) who haven’t been convicted of a crime. Many are sitting in jail simply because they could not afford to post bail.

It should be noted that some defendants are detained by the court prior to trial without the opportunity to post bail based on considerations like the nature of the crime and whether the defendant is considered a flight risk. This article, however, focuses on those defendants to whom the court has afforded bail.

The concept of bail—or releasing someone from prison prior to his or her court appearance—goes back centuries. In the early days of the practice, a family representative often agreed to pay the debt on behalf of a defendant. In the early 20th Century, however, the system in the United States shifted to commercial bonds, which has grown to a $2 billion industry.

The problem with the system, justice advocates point out, is that it does not focus on public safety. Many people who are not a danger to their communities sit behind bars simply because they cannot afford bail, while others who might pose more of a threat to public safety are set free because they have the means to post bail.

In New Jersey, the path to money bail reform began with an observation. In 2012, justice advocates working for the Drug Policy Alliance were reviewing court data and noticed that a large number of people charged with minor offenses were sitting in jail for long periods of time.

“Forty percent of them were there solely because they lacked nominal amounts of money bail,” Roseanne Scotti, New Jersey state director of Drug Policy Alliance, said in a Q & A published by the Pretrial Justice Institute, an organization that is working to change unfair pretrial practices. In the interview, Scotti discussed the work of a broad coalition—including lawmakers, churches and organizations such as the NAACP and the ACLU—which compiled data, launched a campaign and drafted legislation to reform the state’s cash bail system.

“We decided on four changes to advocate for: moving away from money bail, creating a statewide pretrial infrastructure, focusing on non-financial forms of release, and enabling preventive detention for people who are truly a threat to the community,” Scotti said. “The whole time it was a two-pronged issue: justice and public safety.”

The work culminated in a comprehensive reform package that passed in 2014 and was enacted in January 2017—including a constitutional amendment, legislation and updates to courtroom procedures. Experts say the reforms have led to a statewide decline in jail populations.

Although early data indicates jail populations in New Jersey are down, what remains to be determined is what effect the reforms are having on the rates of court appearance and on public safety, says Rachel Sottile Logvin, vice president of the Pretrial Justice Institute. Communities should be aware that reform is an ongoing process, she says. “It’s not like all of a sudden, everything is going to be perfect,” Logvin contends.

Sandra Mayson, a professor at Georgia University School of Law and co-author of an article titled, “Pretrial Detention and Bail” published in Academy for Justice, A Report on Scholarship and Criminal Justice Reform, says, “A lot of other states are looking to the New Jersey model as they try to rewrite their state pretrial laws and consider amending their state constitutions.”

Among other updates, New Jersey’s judges are now using a risk assessment algorithm to help them determine which defendants are eligible for release without bail. The algorithm, which is used in place of a bail hearing—though only as a guide—looks at possible outcomes by comparing information about the defendant with a nationwide database.

In an op-ed for New Jersey’s Advance Local Media, former New Jersey Attorney General Christopher Porrino and former New Jersey prosecutor Elie Honig, wrote, “The legislation adopted an objective, data-driven algorithm to assess the risk of flight and the danger posed by each individual arrestee. New Jersey judges now assess risk—not wealth—to determine whether an arrestee should be held without bail or released regardless of ability to post cash bail.”

One of the drawbacks of risk assessment algorithms, Professor Mayson says, is that they do not have the capability to weigh interpersonal data, and they cannot evaluate an individual’s circumstances on a basic level.

“One of my gripes with risk assessment tools is they tend to predict arrest rather than crime commission, and arrests tend to be skewed by race and class vis-à-vis offending rates,” she says.

For many people, being detained (even if it is just days) can have devastating consequences, including loss of employment. In addition, many people are pressured into pleading guilty in order to secure their release, and as a result end up dealing with the consequences of having a criminal record.

Momentum for cash bail reform is building in jurisdictions nationwide, fueled in part by outrage over the deaths of Sandra Bland and Kalief Browder, both of whom remained in jail pretrial because they could not afford bail, and according to newspaper accounts, committed suicide as a result.

California is moving ahead with its own reforms—though the measures are controversial. In August 2018, a law was enacted abolishing cash bail as a condition of pretrial release, giving judges the authority “to choose between releasing defendants or holding them in ‘preventive detention,’ until their court dates,” according to an article published in The Washington Post. Groups, such as the ACLU, that initially supported the legislation, are now criticizing it, arguing that judges will likely opt to keep people in prison rather than release them, out of an “abundance of caution.”

“What’s going to be key in California is to ensure that the implementation done statewide is fair and just and does not diminish equity,” says Logvin. “So much of this is culture change… it gets to be very complicated when you’re working with jurisdictions at a micro level.”

There has also been movement to address cash bail reform on the federal level. In 2017, California Senator Kamala Harris and Kentucky Senator Rand Paul introduced the Pretrial Integrity and Safety Act, bipartisan legislation that encourages states to reform their bail systems. In an op-ed published in The New York Times, the senators pointed out that it costs approximately $14 billion a year to imprison defendants, mostly nonviolent, who can’t afford bail.

The senators’ op-ed stated: “The Pretrial Justice Institute estimates that bail reform could save American taxpayers roughly $78 billion a year, overall. More important, it would help restore Americans’ faith in our justice system.” The senators’ legislation was never brought for a vote.

The current momentum we are seeing for cash bail reform combines the insights learned from previous reform movements in the 1960s and 1980s, says Professor Mayson.

“What’s driving the nationwide movement toward bail reform is the realization that a system based primarily on cash bail is both irrational and destructive. It just doesn’t make sense to condition people’s liberty solely on wealth,” Professor Mayson says. The idea behind this wave of reform is to “reduce reliance on money bail but also acknowledge the reality that some people, a small number of people, may need to be detained pending trial.”

Glossary Words
algorithm: a process or set of rules to be followed in calculations or other problem-solving operations.
bipartisan: supported by two political parties.
defendant: in a legal case, the person accused of civil wrongdoing or a criminal act.

This article first appeared in the fall 2018 edition of Respect. It has been updated as of May 2020.