Convicting With a Divided Jury 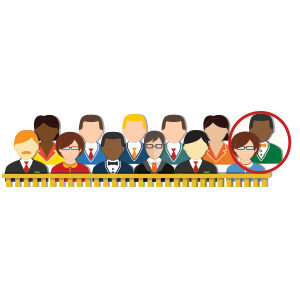 John Adams, Founding Father and our second president, once said: “It is the unanimity of the jury that preserves the rights of mankind.” The federal justice system operates on this premise, as well as 48 state courts—the other two states, not so much.

Typically in the U.S. court system, all 12 jurors in a criminal trial must vote guilty to convict the defendant. The states of Louisiana and Oregon, however, allow for 10-2 verdicts in felony cases, with the exception of first-degree murder. (First-degree murder cases require unanimous votes to convict even in Oregon and Louisiana).

The Sixth Amendment to the U.S. Constitution guarantees in all criminal prosecutions “the right to a speedy and public trial by an impartial jury of the State.” Despite John Adams’ declaration, the Constitution does not specifically mention unanimous verdicts.

George Thomas, a professor at Rutgers Law School—Newark and a criminal law expert, explains that James Madison, considered the Father of our Constitution, formulated the right to a jury trial from the common law that existed at the time.

“The formulation that was ratified contains no mention of unanimity,” Professor Thomas says. “The best implication from the sketchy history is that the Framers probably wanted to leave that to future courts and legislatures. Congress has always required unanimous verdicts; only Louisiana and Oregon do not. Thus, it remains true that unanimity is the norm almost everywhere in the country.”

Why Louisiana and Oregon?

Many believe the non-unanimous jury laws of Louisiana and Oregon can be traced to racism and “vestiges of white supremacy.”

“Louisiana required unanimous verdicts when it became a territory in 1803,” Angela A. Allen-Bell, a professor at Southern University Law Center in Baton Rouge, wrote in an op-ed for The Washington Post. “Non-unanimous verdicts became law in 1898 at the Louisiana Constitutional Convention.”

The official journal of the proceedings from that convention states: “Our mission was, in the first place to establish the supremacy of the white race in this State to the extent to which it could be legally and constitutionally done.” Professor Bell noted that this change resulted in speedy convictions so prisoners could be used as free laborers. Also, the few black jurors that were selected could not block the convictions of other African Americans. Back in 1898, when the state first changed its practice of unanimous verdicts, it only required nine votes for conviction. The state would later amend that to 10-2 verdicts in 1973 after another constitutional convention.

In Oregon, the change from unanimous to non-unanimous juries came in 1934 after rising anti-immigrant and anti-Semitic feelings. There was a large Ku Klux Klan membership in the state in the 1930s, and widespread prejudice surfaced after a jury failed to convict a Jewish man of first-degree murder in the killing of a Protestant. The charge was reduced to manslaughter and the following year, the people of Oregon, through a ballot initiative, passed a law allowing non-unanimous verdicts. A 1933 editorial in the Oregonian stated: “The increased urbanization of American life and the vast immigration into America from southern and eastern Europe, of people untrained in the jury system, have combined to make the jury of twelve increasingly unwieldy and unsatisfactory.”

Professor Thomas has a different perspective. “I can’t speak for Oregon,” he says, “but I doubt Louisiana’s decision to permit non-unanimous verdicts was chiefly motivated by racism.”

Originally owned by France, Louisiana took much of its law from that country, which permitted non-unanimous jury verdicts in criminal cases, Professor Thomas explains.

“The Southern states unfortunately had found many ways of keeping African Americans out of jury pools so there would have been little need for a non-unanimous verdict to minimize their effect on Southern ‘justice,’” Professor Thomas says. “Louisiana has many differences in its laws from the other 49 states because it relied on the French codes of 1804-1808 when drafting its code.”

Because it is easier to convince 10 people rather than 12, prosecutors tend to support non-unanimous juries; deliberations are also quicker and produce less hung juries. When unanimous juries are required, even one holdout can force a mistrial.

Still, Professor Thomas prefers unanimous verdicts. “We now know that thousands of innocent defendants are convicted at trial,” he says. “The least we could do is insist on a unanimous verdict.”

The New Orleans Advocate did an extensive study of felony trials in the state over a six-year period, reviewing nearly 1,000 trials. The newspaper found that 40 percent of convictions came over the objections of one or two jurors. In other words, they were not unanimous. In addition, when the defendant was black, he or she was 30 percent more likely to be convicted by a split verdict. The Advocate concluded that the non-unanimous jury system in the state “becomes more tilted against black defendants at each stage: when jurors are summoned, when they’re picked for juries, and in deliberation rooms where voices of dissent can be ignored.”

In her Washington Post op-ed, Professor Bell wrote, “These non-unanimous jury laws ignore the sage guidance from the American Bar Association, which opposes them. They also ignore all the research on group thinking, which suggests that unanimous verdicts are more reliable, more careful, and more thorough.”

In 1972, the U.S. Supreme Court considered the constitutionality of non-unanimous juries. In Johnson v. Louisiana and Apodaca v. Oregon, the Court found that non-unanimous verdicts did not violate due process rights or the reasonable doubt standard of the Fourteenth Amendment. In addition, the Court concluded the Sixth Amendment requires unanimity in federal cases but not state ones.

In November 2018, Louisiana voters decided through a ballot initiative that unanimous jury verdicts would be required in felony trials. That referendum went into effect in January 2019 but was not retroactive.

In Oregon, state district attorneys originally supported a ballot initiative to require that all verdicts be unanimous. At the same time, the district attorneys also proposed taking away the right of defendants to request a court trial, sometimes called a bench trial, which is a decision granted by a judge instead of a jury. When that proposal failed they withdrew their support for the initiative.

What the Supreme Court said

In March 2019, the Supreme Court agreed to hear the case of Ramos v. Louisiana, brought by Evangelisto Ramos. In 2016, a Louisiana state court convicted Ramos of second-degree murder by a 10-2 jury vote. Because Louisiana’s ballot initiative was not retroactive, it did not apply to Ramos’ case.

The U.S. Supreme Court ruled on Ramos in April 2020, siding with the defendant and essentially overturning Apodaca. The Court’s opinion, written by Justice Neil Gorsuch, acknowledged the racist ties of non-unanimous juries. “Courts in both Louisiana and Oregon have frankly acknowledged that race was a motivating factor in the adoption of their states’ respective non-unanimity rules,” Justice Gorsuch wrote.

The Court’s decision means that Ramos will receive a new trial. Because the Court’s decision is retroactive, hundreds of other inmates in Louisiana and Oregon, whose convictions were secured by a non-unanimous jury vote, will also receive new trials.

Glossary Words
defendant: in a legal case, the person accused of civil wrongdoing or a criminal act.
hung jury: a jury whose members can’t agree on what the verdict should be.
overturn: in the law, to void a prior legal precedent.
unanimity: agreement by all involved; unanimous.

This article first appeared in fall 2018 edition of Respect. It has been updated as of May 2020.