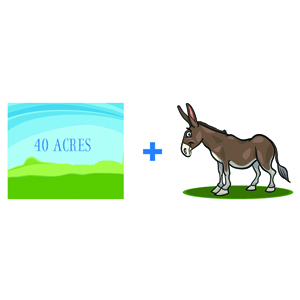 The concept of the U.S. government paying reparations for wrongs it has committed is not a new one. In 1980, the U.S. Supreme Court awarded the Sioux Nation a $100 million judgment for land that the government took from them in 1877, which violated a treaty signed in 1868. The U.S. government also apologized to Japanese Americans for internment during World War II and paid $20,000 to each internment survivor still living.

Immediately after the Civil War ended, reparations were offered to newly freed slaves as well. Union General William T. Sherman and Secretary of War Edwin M. Stanton, met with 20 leaders of the Black community in Savannah, Georgia on January 12, 1865 to ask what they wanted in terms of compensation. The newly freed slaves wanted land. The spokesman for the group was Rev. Garrison Frazier, a former slave who bought his freedom in 1857.

“The way we can best take care of ourselves is to have land, and turn it and till it by our own labor,” Rev. Frazier said at that time. “We can soon maintain ourselves and have something to spare.”

As a result, the government seized 400,000 acres of Confederate-owned land and Gen. Sherman issued his famous Special Field Order No. 15, commonly known as the “40 acres and a mule” policy four days later. The order stated: “The islands from Charleston, south, the abandoned rice fields along the river for thirty miles back from the sea, and the country bordering the St. Johns river, Florida, are reserved and set apart for the settlement of the Negroes now made free by the acts of war and the proclamation of the President of the United States.” The order went on to state “…each family shall have a plot of not more than (40) acres of tillable ground…” There was actually no mention of mules in the order; however, some families received leftover Army mules, which is where the common name comes from.

By the spring of 1865, more than 40,000 former slaves had settled on the seized land. In the fall of that year, however, President Andrew Johnson, who succeeded to the presidency after President Lincoln’s assassination, overturned the order, giving the land back to the original owners and evicting thousands of freed slaves.

In 1867, House Speaker Thaddeus Stevens of Pennsylvania argued for a plan to distribute confiscated Confederate land to former slaves. “Withhold from them all their rights and leave them destitute of the means of earning a livelihood, and they will become the victims of hatred or cupidity [greed] of the rebels whom they helped to conquer,” Stevens said in defending his bill from the floor of the House. That effort failed as well.

“Had such a radical land reform taken place it is easy to envision that the vast current differences in wealth between Blacks and non-Blacks would not exist,” William Darity Jr., an economist and professor of public policy at Duke University, told The New York Times.

In an 1890 letter to politician and newspaperman Walter R. Vaughn of Iowa, Frederick Douglass pointed out that former slaves, who had built the Capitol Building, as well as the White House, had not been compensated for 250 years of unpaid labor.

“The Egyptian bondsman went out with the spoils of his master, and the Russian serf was provided with farming tools and three acres of land upon which to begin life,” Douglass wrote, “but the Negro has neither spoils, implements nor lands, and today he is practically a slave on the very plantation where formerly he was given to toil under the lash.”

Rep. Connell tried to promote the legislation as a stimulus or “Southern-tax relief bill,” contending that it would provide “economic justice to former slaves and their spending would help boost the Southern economy.”

While Rep. Connell’s bill failed, the ex-slaves themselves took up the pension movement. By the 1890s, there were several ex-slave pension organizations, including most prominently, the National Ex-Slave Mutual Relief, Bounty and Pension Association (MRB&PA), which at its height boasted membership in the hundreds of thousands.

According to the National Archives, three government agencies, including the Bureau of Pensions, the Post Office Department and the Department of Justice, worked together to investigate and discredit organizations and individuals associated with the ex-slave pension movement. In 1899, the Post Office issued a fraud order against MRB&PA, stopping the delivery of all mail from the organization. A 1902 letter from the commissioner of pensions accused the organization of arousing false hope in the ex-slaves seeking reparations, which would lead to “inevitable disappointment, and probably distrust of the dominant race and of the Government.”

The campaign against the ex-slave pension movement was successful. When another bill came before the Senate Committee on Pensions, it concluded, “This measure is not deserving of serious consideration by Congress.”

Despite government harassment, MRB&PA brought a class action lawsuit against the U.S. Treasury Department in 1915. The suit, which was the first litigation on a federal level seeking reparations, claimed that the more than $68 million dollars in taxes collected between 1862 and 1868 on cotton should rightly go to ex-slaves since it had been produced as a result of their “involuntary servitude.”

The Court of Appeals for the District of Columbia dismissed the case, Johnson v. McAdoo, on the grounds of governmental immunity. The U.S. Supreme Court upheld that decision. In 1995, another reparations case, Cato v. United States, was rejected on the same grounds.