A Fair Fight Against Voter Suppression 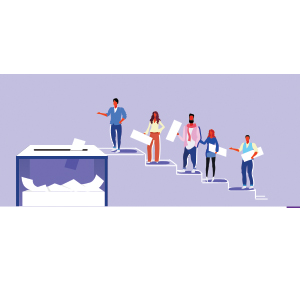 Changes in voting practices or requirements to vote often seem minor. But those minor changes can have a big impact and are, in fact, examples of voter suppression.

For instance, one voter suppression tactic is closure of polling places. Is that a big deal? Voters are not being told they can’t vote, just not at the polling place where they have voted for years. But, what if you don’t have a car and the nearest polling place to you, which used to be down the street, is now five or 10 miles away (in rural areas it can be even farther)? Odds are that you won’t vote.

Another tactic is decreasing early voting. Again, voters are not being denied the vote outright, but that decision has consequences. Being able to vote early cuts down on the long lines seen on Election Day. Statistics have shown that it is also a benefit used more often by minority voters. Voting early can also eliminate the need for voters to take off of work, possibly losing income.

“These officials slyly mask their assaults through criteria that appear neutral on the surface but nevertheless target race, gender, language and economic status,” Stacey Abrams wrote in a New York Times opinion piece. Abrams is the founder of Fair Fight 2020, a voting rights group that fights voter suppression efforts.

Many believe that Abrams would have been elected Governor of Georgia in 2018 if not for voter suppression tactics. During the campaign, her opponent retained his position as Georgia’s Secretary of State. Part of that job is to oversee the state’s voter rolls. During the campaign, his office closed polling places in predominantly African American areas and also held up more than 50,000 voter applications. These irregularities prompted a lawsuit and a delay in declaring a winner of the race, but it was finally decided in mid-November.

“I acknowledge that former Secretary of State Brian Kemp will be certified as the victor of the 2018 gubernatorial election,” Abrams said in a speech given on November 16, 2018. “But to watch an elected official—who claims to represent the people of this state—baldly pin his hopes for election on the suppression of the people’s democratic right to vote has been truly appalling. So, to be clear, this is not a speech of concession.”

Abrams now devotes her time to fighting voter suppression and gives interviews, speeches and writes on the subject. In one interview she said she thinks of voter suppression in three ways—registration access (getting on the voter rolls), ballot access (getting to the polls) and whether the ballots are actually counted. Abrams tells the story of some counties in her state throwing out absentee ballots because voters entered the date incorrectly. Apparently there were two lines that indicated “Date.” One was for a birth date, the other was for the date of submission; however, both lines just said “Date.”

In her op-ed piece for The New York Times, Abrams wrote about another form of voter suppression employed in Georgia—the “exact match” policy. A federal court ruled after the election that the policy is unlawful because it requires data entry to be perfect. This policy is how the state was able to hold up 53,000 voter registrations. Seventy percent of those registrations were determined to be from African American voters despite the fact that black voters make up only 30 percent of eligible Georgia voters.

Abrams illustrated the problem with exact match with the example of a man whose last name is del Rio. “He was affected by the policy merely because the department of motor vehicles office where he registered to vote did not allow spaces in last names. He was ‘delRio’ there. But the voter rolls do allow spaces. No exact match,” Abrams wrote. “Voters like Mr. del Rio faced unnecessary hurdles, and poll workers were not trained properly to make sure that voices like his were heard.”

Fair Fight 2020 is working to correct inaccurate voter rolls and advocating for standardizing the rules for counting absentee ballots. This is a fight that is going beyond Georgia, targeting 20 states across the Midwest and Southeast.

“Use the ballot box to create the change our communities need and deserve,” Abrams wrote. “In Georgia and across the country, voters deserve the right to pick their leaders and set the direction of our nation.”