Women and the Draft, A Decades-Old Debate 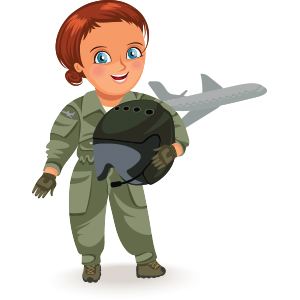 History was made on December 3, 2015 when Defense Secretary Ashton B. Carter announced that all combat roles in the military would be open to women. This new inclusion allowed all women who were fit for combat to be assigned to those roles beginning in January 2016. It also gave women the ability to compete for spots on Navy Seal teams and other elite units.

Even though women have been able to serve in combat roles since 2016, the Selective Service System, the independent agency that maintains information on those subject to a military draft, continues only to register men between the ages of 18 and 25, leaving women out. Men must register 30 days before their 18th birthday or be subject to penalties. Today, failure to register with the Selective Service System is a felony punishable by a fine up to $250,000 or up to five years in prison or a combination of both.

Subjecting women to a potential draft has been debated for decades. In February 2019, a U.S. district court judge in Houston ruled in the case of National Coalition for Men v. Selective Service System that the tradition of requiring only men to register with Selective Service is unconstitutional.

History of the draft

The United States military draft dates back to the Civil War when it was called (and sometimes is still called) conscription. Men who were drafted in the Civil War could avoid military service by paying $300 (more than $8,000 today) to the government, which bought an exemption from a particular battle. Some men who could afford it hired a substitute to take their place for the entire war. When the Selective Service Act of 1917, which established the Selective Service System, was passed during World War I, substitutions and fees to get out of battle were no longer possible. By the end of World War I, there were approximately 24 million Selective Service System registrations and nearly three million had been drafted into the army. After the war, the draft was dissolved.

In 1940, the United States instituted its first peacetime draft, which required all men between the ages of 18 and 45 to register. In 1969, during the Vietnam War, draftees accounted for 88 percent of soldiers on the battlefield.  The draft was terminated in 1973 and the armed forces transitioned to an all-volunteer system of recruitment. However, in 1980, President Jimmy Carter reinstated draft registration for men and proposed requiring women to register as well. The Senate’s Armed Services Committee did not support President Carter’s proposal concerning women. To be clear, there is no draft in place, just a requirement for men to register before their 18th birthday should there be a need for a draft in the future.

Legal challenges to the draft

Even prior to the decision in National Coalition for Men v. Selective Service System, the draft has been challenged; initial claims were that it violated the 13th Amendment, which prohibits “involuntary servitude.” The U.S. Supreme Court has always determined that the draft does not violate the U.S. Constitution.

Congress has been debating the issue of women in the draft since President Carter asked Congress to include women. In 1983, the U.S. Supreme Court in the case of Rostker v. Goldberg ruled that Congress had a reasonable basis for excluding women from the draft because at that time only men could serve in key combat roles.

The decision in Rostker was 6 to 3. Justice William H. Rehnquist, writing for the majority, stated, “This is not a case of Congress arbitrarily choosing to burden one of two similarly situated groups. Men and women, because of the combat restrictions on women, are simply not similarly situated for purposes of a draft or registration for a draft.”

At the time, the Court also upheld Congress’s conclusion that including women in draft registration would create administrative and military problems.

Once those barriers for women in combat roles were lifted, however, it gave way to the National Coalition for Men lawsuit, brought in 2013, which claimed it was not fair to require men and not women to register for the Selective Service System. Judge Gray Miller of the U.S. District Court of Texas agreed with them.

In his ruling Judge Miller wrote, “While historical restrictions on women in the military may have justified past discrimination, men and women are now ‘similarly situated for purposes of a draft or registration for a draft.’ If there ever was a time to discuss the place of women in the Armed Services that has passed.”

Judge Miller noted that a group of senators who had opposed the expansion of the registration declared, “We should not hinder the brave men and women of our armed forces by entrapping them in unnecessary cultural issues.” Judge Miller said that defense “smacked of an archaic and overbroad generalization about women’s preferences.”

Where do we go from here?

The Trump administration is appealing the federal court ruling and defends the male-only military draft. The Justice Department says that it would be “particularly problematic” to order women to register for the draft.

In news reports, Justice Department lawyer Michael Gerardi argued, “It would impose draft registration on all eligible American women by judicial fiat before Congress has considered how to address the matter. No party before this court represents the interests of those who would be impacted by this change.”

Jill Hasday, a professor at the University of Minnesota Law School, who teaches a course on sex discrimination and has testified before Congress on this issue, agrees with the district court’s decision and feels if Congress wants to continue with military registration for the next generation, women should be included as well as men.

“Military registration and the draft would have to operate according to sex-neutral rules,” Professor Hasday says. “In other words, the same rules and requirements would apply to men and women.”

In 2017 Congress created the National Commission on Military, National and Public Service (NCMNPS) to review the Selective Service System and decide whether the draft should be expanded to include women or possibly be eliminated all together. The NCMNPS was also charged with suggesting ways to increase participation in public service.

“For some of our younger Americans, the draft is just something you hear discussed on TV,” Joe Heck, NCMNPS chairman and an Iraq War veteran, told Military Times. “There is no widely held expectation for service in our country today, and we need to look at that.”

In April 2019, the Commission held two public hearings and sought comments on the U.S. military service system. Professor Hasday testified during these hearings, saying, “When you exclude people from a group, you lead others to believe that they are not equal.” As it stands now, Professor Hasday says the message the government is sending is: “Women are not equal to men when it comes to a constitutional duty to protect our nation.”

The Commission has spent months evaluating the U.S. draft policy including the possibility of including women in required draft registration. It is also focused on promoting national service as well. Some have suggested requiring a year of mandatory public service after graduating high school, but that does not necessarily mean joining the military.

NCMNPS will continue to hold public hearings, conduct research and seek comments from the public on the U.S. military system before turning in its final report to Congress in March 2020. At that point, it will be up to Congress to decide what to do, if anything, with the recommendations.

Glossary Words
conscription: historically, the practice of drafting men into military service.
felony: a serious criminal offense usually punished by imprisonment of more than one year.
fiat: a decree.