E-Cigarette Debate Is Lighting Up 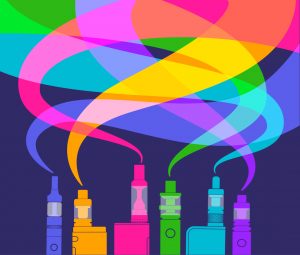 In the fall 2014 edition of The Legal Eagle, we published a story (E-Cigarettes—To Regulate or Not to Regulate) on the relatively new e-cigarette industry and its appropriateness for kids. Since that article was published, there have been several studies regarding the benefits and hazards of e-cigarettes.

“People smoke for the nicotine but die from the tar” is a quote that dates back to 1970s tobacco research. It means that it is the nicotine that smokers become addicted to but it is the tar and carcinogens in cigarettes that cause cancer. That’s why e-cigarettes, first introduced in the United States in 2006, have been hyped as a great alternative to regular cigarettes because they deliver nicotine without the tar.

A report published by the Royal College of Physicians in April 2016 touted the benefits of e-cigarettes, including that they are only five percent as harmful as regular cigarettes and concluded that the benefits of e-cigarettes outweigh the harms. Data analysis by University College London’s Tobacco Studies estimated that since 2009 approximately 20,000 British smokers were able to quit with the help of e-cigarettes. Another study claims that 6.6 million lives could be saved if even 10 percent of American smokers switched to e-cigarettes per year over the next 10 years.

In 2018, the National Academies of Sciences, Engineering and Medicine released a comprehensive report, which also concluded that e-cigarettes are less harmful than regular cigarettes and can help smokers quit. However, the report also determined vaping can be addictive and provided evidence that using e-cigarettes could cause kids to try regular cigarettes. The report did not make a conclusion on the long-term safety of using e-cigarettes because there have been no long-term scientific studies on the devices, since they are still relatively new.

These studies, while promising for adults looking for a less harmful alternative to smoking, are not so rosy for kids who are getting into vaping more and more without knowing the potential risks.

In the Garden State

In July 2017, the smoking age in New Jersey was raised from 19 to 21, joining only two other states (Hawaii and California) that require consumers be at least 21 years old to purchase tobacco products. The New Jersey law went into effect in November 2017 and includes the sale of e-cigarettes.

The new law hasn’t made a noticeable difference in kids obtaining e-cigarette products, however, since they can be purchased online.

Lori Todd, president of the Association of Student Assistance Professionals of New Jersey (ASAPNJ), says the e-cigarette craze started about five years ago but “really took over our lives about three years ago.”

If students are caught vaping in school, it is still a violation of the tobacco policy, but Todd admits that cracking down on vaping in schools is difficult. The smoke or “vape” produced from an e-cigarette or device is essentially air and dissipates quickly. Vape pens also don’t trip school smoke alarms, she points out.

What most concerns Todd in regard to vaping, however, is that students across the state and nationwide are using vape pens with liquid marijuana and getting high during school.

The Rise of Juul

Introduced in 2015, Juul took the industry by storm, quickly capturing nearly 60 percent of the e-cigarette market. Its sleek design, which resembles a flash drive, is easy to conceal allowing users to vape discreetly. The company has publicly said its products are not for minors, however, among its marketed “flavors” are mango, crème brulee and fruit.

The kid-friendly flavors promoted by all e-cigarette sellers has long been an issue for critics who say they are peddling to kids. An article in The New York Times said, “Three of the top-selling flavors at e-liquid.com, a large online retailer, include ‘Unicorn Milk’ (strawberries and cream), ‘TNT’ (strawberry, apple and peach) and ‘I Love Donuts’ (blueberries and pastry).”

Jonathan Winickoff, former chair of the American Academy of Pediatrics Tobacco Consortium, told The New Yorker, “If you were to design your ideal nicotine-delivery device to addict large numbers of United States kids, you’d invent Juul. The earlier these companies introduce the product to the developing brain, the better the chance they have a life-long user.”

Matthew Myers, president of Campaign for Tobacco-Free Kids, told The Washington Post, “Juul was a game changer,” and listed three reasons why the company has been so successful: “It figured out how to deliver high levels of nicotine in a way that wasn’t harsh; it packaged the product in a streamlined, clever way; and it developed a social media and advertising campaign that made a Juul e-cigarette cool and hip.”

Juul committed $30 million to research the effects of e-cigarettes on youth, as well as developing anti-vaping curriculum for schools. The company pulled the curriculum project in May 2018, when it was revealed that Juul was offering schools “stipends” of as much as $20,000 to use the curriculum.

Bonnie Halpern-Felsher, a professor of pediatrics at Stanford University’s Division of Adolescent Medicine, pointed out in BuzzFeed News that the tobacco industry did the same thing in the past with company-sponsored tobacco education programs. Since then, studies have shown these programs have the opposite effect of their intended goal. Instead of educating about the dangers of tobacco, or in this case e-cigarettes, the programs end up promoting the products.

“Under no circumstances should anybody from the tobacco, nicotine, vaping industries be involved in or implementing tobacco prevention programs,” Professor Halpern-Felsher told CNN.

In an effort to determine whether Juul is intentionally marketing to kids, the Food and Drug Administration (FDA) demanded documents, in April 2018, from Juul Labs detailing the marketing and research behind its products.

The FDA regulated e-cigarettes as a tobacco product in 2016. Effective August 10, 2018, the FDA required the following warning label on all e-cigarette products “WARNING: This product contains nicotine. Nicotine is an addictive chemical.”

In a blow to the industry, which experts say could balloon to more than $5 billion in the coming year, the FDA issued tougher regulations requiring all e-cigarette manufacturers register with the agency and prove their products have a benefit for public health. In addition, the FDA demanded that the five leading e-cigarette manufacturers—Juul, Vuse, Blu, Logic and MarkTen—submit plans on how they will “sharply curb sales to underage consumers,” threatening to temporarily or permanently ban flavored products from the market if they don’t comply.

In November 2018, the agency stopped short of that threat, still allowing the sale of flavored e-cigarettes in convenience stores and gas stations, but requiring a separate area, one that is closed off to minors, for the sale. In addition, to curb the online market for kids, the FDA is imposing “age-verification requirements” for online sales.

Dr. Scott Gottlieb, commissioner of the FDA, has said in press statements, “The nicotine in these products can rewire an adolescent’s brain, leading to years of addiction. The viability of these products is severely undermined if those products entice youth to start using tobacco and nicotine.”

In a briefing before Congress, Dr. Gottlieb said, “Inevitably what we are going to have to contemplate are actions that may narrow the off-ramp for adults who see e-cigarettes as a viable alternative to combustible tobacco in order to close the on ramp for kids. It’s an unfortunate trade-off.”

On November 13, 2018, Juul announced that in an effort to curtail underage use of its products, it would stop selling fruit-flavored nicotine pods in stores. Tobacco and menthol flavors would still be available in retail stores. In addition, the company said it was shutting down its Facebook and Instagram accounts, losing nearly 90,000 followers.

The FDA’s Center for Tobacco Products also launched a campaign called “The Real Cost,” which Todd says missed the mark. The campaign was an effort to get out the facts about vaping and provided schools with a series of posters, apparently to be posted in school bathrooms. According to Todd, the posters were “highly inappropriate” for the audience and contained gross messages playing off the bathroom theme.

“Schools are telling me that they threw them out,” Todd says. “It was a waste of resources and money. If they had consulted ASAPNJ, we could have been part of the discussion to provide a message that kids would respond to.”

According to the Centers for Disease Control and Prevention, fewer middle and high school students—nearly one million fewer—used tobacco products in 2017. The number of high school students using e-cigarettes has climbed, however, with the most recent data showing a 75 percent increase.

Todd says kids who would never even think of smoking a regular cigarette think nothing of using e-cigarette products because they don’t see the addiction correlation or recognize the fact that they are still inhaling chemicals even if they use the products that have no nicotine content.

“Kids don’t think in terms of this is going to hurt me long term,” she says.

Todd explains that ASAPNJ, the organization she heads, provides guidance to their student assistance coordinator (SAC) members on how to deal with the e-cigarette issue as well other substance abuse concerns. These SACs, on the middle and high school level, conduct lessons with the kids to bring awareness of the dangers of vaping. That awareness, she says, extends to parents and community members as well in evening workshops.

“Some parents think ‘better my kids do this than smoke tobacco,’” Todd says because they aren’t aware of the dangers either.

Talking about e-cigarettes, Nancy Rigotti, director of the Tobacco Research and Treatment Center at Massachusetts General Hospital, told The Verge, “There’s no benefit for young people, or anybody who’s not already nicotine-addicted.”

Read the original article: E-Cigarettes—To Regulate or Not to Regulate