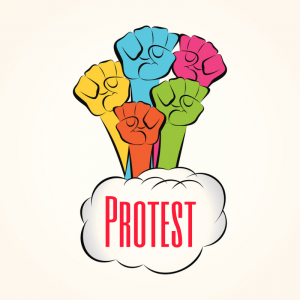 In the winter 2018 edition of The Legal Eagle, we published a story (Limiting Protest Silences Dissent) about limiting protests, specifically National Football League (NFL) players taking a knee during the national anthem to protest social injustice and brutality against African Americans.

As reported in that original article, the NFL’s policy did not compel players to stand during the anthem. It only stated that players “should” stand. In May 2018, the NFL amended its policy, which stated: “All team and league personnel on the field shall stand and show respect for the flag and the anthem.” The new policy did give players the option of staying in the locker room if they did not want to stand, but warned that disciplinary action would be taken on any player taking a knee during the anthem. That discipline would be left up to the individual teams to decide, but the NFL would also have discretion to fine teams for the actions of their players.

President Donald Trump, who had made his opinion on the kneeling football players known, applauded the new policy. Not everyone was as pleased.

All league owners, with the exception of the 49ers, who abstained, adopted the new policy. There was no input from the players or their union, the National Football League Players Association (NFLPA), which immediately filed a grievance with the NFL and released a statement saying: “NFL players have shown their patriotism through their social activism, their community service, in support of our military and law enforcement and yes, through their protests to raise awareness about the issues they care about.”

The NAACP denounced the NFL’s decision, saying in a statement: “Protest is an American tradition; by protesting we work to hold our country accountable to its highest ideals. Instead of coming together to address an issue disproportionately plaguing the African American, the NFL owners have chosen to bury their heads and silence players.”

Malcolm Jenkins, who plays safety for the Philadelphia Eagles and is co-founder of the Players Coalition, a socially active organization of more than 75 NFL players that focuses on criminal justice reform and police and community relations, also issued a statement.

“What NFL owners did today was thwart the players’ constitutional rights to express themselves and use our platform to draw attention to social injustices like racial inequality in our country. Everyone loses when voices get stifled,” Jenkins said.

Last season, Jenkins did not kneel during the anthem, but raised his fist in protest.

The American Civil Liberties Union also weighed in on the issue. “Protest isn’t supposed to be comfortable,” ACLU Deputy Legal Director Jeff Robinson said in a statement. “It’s not supposed to happen in the shadows. It’s supposed to disrupt. Patriotism is demanding America uphold the ideals it was founded on: equality and justice for all. Patriotism is pledging allegiance to democratic values, not to symbols or songs. Patriotism is dissent.”

In July 2018, the NFL and the NFLPA issued a joint statement advising that the new policy had been suspended while the two sides work out a solution.

“In order to allow this constructive dialogue to continue, we have come to a standstill agreement on the NFLPA’s grievance and on the NFL’s anthem policy,” the league said in a statement. “No new rules relating to the anthem will be issued or enforced for the next several weeks while these confidential discussions are ongoing.”

If the NFL policy had been challenged in court, Alan Hyde, a professor at Rutgers Law School—Newark and an expert in labor and employment law, says it would have been hard to predict which side would have prevailed.

“Each side would have good arguments,” Professor Hyde says. “The labor laws draw a line between protests about working conditions (protected) and political protests (often not protected). It’s often difficult to untangle these. And while employees have a right to public protests to get public support, employers also sometimes have a right to restrict protected protests to protect the image of their business.”

Some legal scholars contend that NFL players don’t have the right to protest because the right only applies to freedom from government speech violations. In other words, your employer, in this case the NFL, can curb the free speech of its employees.

“The right of free speech guaranteed by the First Amendment is indeed held only against public officials like police or school principals,” Professor Hyde says. “But private-sector employees have a right to take group action under the National Labor Relations Act of 1935. The right isn’t absolute, of course, and employers also have a right to make reasonable rules.”

In an op-ed for Vox, Benjamin Sachs, a labor law professor at Harvard University, said that President Donald Trump’s influence on the national anthem debate changes the free speech dynamic, violating the players’ rights to be free of government censorship.

“The owners have made clear that their adoption of the new rule was made in response to presidential intervention: They believe that if they do not ban the protests, the president will continue to make the protests a national issue and thereby negatively affect the league’s income stream,” Professor Sachs wrote. “When the president and the vice president of the United States are this intimately involved in encouraging a private employer to adopt a workplace rule, the Constitution should have something to say.”

Professor Hyde says that NFL players are like all employees who are represented by a union. “Their union filed a grievance over the anthem policy,” he says, “and that is why the team owners backed down.”

Asked whether employers can compel employees to comply with its wishes, Professor Hyde says that individual employees have very little way to fight employer demands unless they are discriminatory, such as treating African American or women employees differently from everyone else.

“An individual told to stand may lose their job if they don’t,” Professor Hyde says. “The labor laws only kick in to protect group action.”

NFL players are not the first athletes to use their high profiles to protest injustice and bring about change. There is a long history of protest in sports, most famously Muhammad Ali’s protest of the Vietnam War and the two track stars (Tommie Smith and John Carlos) raising gloved fists on the podium after winning gold and bronze medals in the 1968 Olympics in Mexico City.

Sports figures on the collegiate level have protested as well. In 2003, Toni Smith, a member of the Manhattanville College women’s basketball team, made headlines when she protested the Iraq War by turning her back on the flag. She was ostracized for her silent protest but did not waiver.

In a statement after the uproar, Smith said, “It is my right as an American to stand for my beliefs the way others have done against me. Being patriotic cannot simply be an empty slogan. Patriotism can be shown in many ways, but those who choose to do so by saluting the flag should recognize that the American flag stands for individuality and freedom.”

A Washington Post op-ed, written by Lonnie Bunch, director of the National Museum of African American History and Culture, and David Skorton, secretary of the Smithsonian Institution, contends that sports offers a powerful way to protest “because it resonates with people; passion for a team is often passed down from generation to generation.”

Bunch and Skorton wrote: “In some ways, sports are conducted on the ultimate level playing field, a meritocracy where ability outweighs backgrounds, beliefs, race and religion. Athletes have unique insight into working toward a goal and looking past individual glory for the greater good. As such, they have something profound to say about our nation, our freedoms and who we aspire to be. We should listen.”

Glossary Words:
meritocracy — the holding of power based on a person’s ability.