Land of the Free and the Home of the Brave? 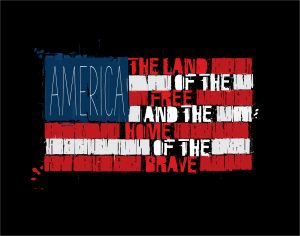 Every American is familiar with “The Star-Spangled Banner.” Some may even be able to sing it or at least get through “O say can you see, by the dawn’s early light….”

On March 3, 1931, President Herbert Hoover signed the law that would officially designate “The Star-Spangled Banner” as America’s National Anthem. Not everyone was a fan of the song at the time and today many believe it contains racist overtones.

Origin of the Anthem

By now, the story of the song’s origins is widely known. Francis Scott Key, an American lawyer and amateur poet, wrote the poem that would become the anthem after the Battle of Baltimore during the War of 1812. On September 13, 1814, Key was aboard the British ship HMS Tonnant negotiating a prisoner release. After negotiations were concluded he was not allowed to leave because the British feared he would compromise their position.

Forced to spend the night aboard an enemy ship, Key watched and heard the bombing of Fort McHenry. At dawn the next day, Key saw the American flag still being flown over Fort McHenry, which meant that the British had not captured it and the Battle of Baltimore had been won by the United States. Inspired by what he saw, Key wrote the poem “Defence of Fort McHenry,” which became known as “The Star-Spangled Banner.” The poem would be set to a popular melody at the time, “To Anacreon in Heaven,” a British drinking song.

Beginning in 1890, the U.S. Army and Navy used “The Star-Spangled Banner” as their official anthem, but it was not popular on a national scale. It wasn’t until around 1910 that some members of Congress started introducing resolutions or legislation to make the song the official National Anthem of the United States. Over the next 20 years, Congress considered more than 40 bills concerning the anthem, all of which went nowhere.

In his book, Flag: An American Biography, historian Marc Leepson writes: “The legislation did not succeed for several reasons. First, some believed that it was inappropriate for the nation to adopt as its National Anthem a song derived from an English drinking tune—especially after January 19, 1920, when Prohibition went into effect. Others objected to ‘The Star-Spangled Banner’ because the music was not written by an American. Another objection had to do with the difficulty of singing the tune, which has a very wide range of notes. There also were arguments that Key’s words were directed at a military enemy, Great Britain, that had become a close American ally.”

According to Leepson’s book, Clyde R. Miller, an administrator at Columbia University’s Teachers College, said in 1930, “’The Star-Spangled Banner’ suggests that patriotism is associated with killing and being killed, with great noise and clamor, with intense hatreds and fury and violence. Patriotism may on very rare occasions involve all of these, but not everyday life.”

During those 20 years, other patriotic songs, such as “Yankee Doodle” and “America the Beautiful” had been suggested as alternatives to “The Star-Spangled Banner.” In the end, lobbying efforts by the American Legion and the Veterans of Foreign Wars prevailed.

Of all the objections raised about establishing “The Star-Spangled Banner” as the country’s national anthem, none were because of the overtones of racism contained in the song. The anthem contains four verses, though it is only the first verse that is sung. The third verse, many historians agree, is racist. Here’s the stanza:

And where is that band who so vauntingly swore,
That the havoc of war and the battle’s confusion
A home and a Country should leave us no more?
Their blood has wash’d out their foul footstep’s pollution.
No refuge could save the hireling and slave
From the terror of flight or the gloom of the grave,
And the star-spangled banner in triumph doth wave
O’er the land of the free and the home of the brave.

For context, we need to examine Francis Scott Key himself, who was a slaveholder from Maryland. During his legal career, Key represented in court several slaves seeking freedom, but also represented slaveholders seeking the return of their runaway slaves. His racist views, however, dominated. He called African Americans “a distinct and inferior race of people, which all experience proves to be the greatest evil that afflicts a community.”

Key was a founding member of the American Colonization Society, an organization whose primary goal was to send free African Americans (not slaves) back to Africa. When the organization’s policy shifted toward the abolition of slavery, he was removed from the board, as he was a staunch critic of the abolitionist movement and used his position as U.S. Attorney to suppress it.

In 1836, Key prosecuted Dr. Reuben Crandall for “seditious libel.” The doctor’s crime was possessing a trunk full of abolitionist pamphlets. Key felt that the abolitionist movement was so dangerous that he sought the death penalty in the case. In his closing statement to the jury, Key said: “Are you willing gentlemen, to abandon your country, to permit it to be taken from you, and occupied by the abolitionist, according to whose taste it is to associate and amalgamate with the negro? Or, gentlemen, on the other hand, are there laws in this community to defend you from the immediate abolitionist, who would open upon you the floodgates of such extensive wickedness and mischief?”

What Does it Mean?

In particular, it is three lines with which many take issue: “Their blood has wash’d out their foul footstep’s pollution/No refuge could save the hireling and slave/From the terror of flight or the gloom of the grave.” But what do they mean?

The British military actively recruited American slaves during the War of 1812, as well as the Revolutionary War, promising them their freedom if they fought on the side of the British, historian Marc Leepson explained in an appearance on the Civics 101 podcast.

During the War of 1812, there were two regiments, called the Corps of Colonial Marines, which were comprised of American slaves. One of those regiments fought in the Battle of Baltimore. In total, there were about 6,000 slaves that fought on the side of the British. When the war was over the U.S. government demanded the return of the slaves as American “property.” Great Britain refused and many of the former slaves settled in Canada.

Leepson said most historians agree those lines refer to slaves that fought on the side of the British. Some historians go further and say that Key was expressing satisfaction or reveling in the death of slaves who had freed themselves. Others think the meaning is not known since there is no written record of Key indicating what he meant by those lines.

In November 2017, the California chapter of the NAACP began a campaign to replace the anthem, calling it “one of the most racist, pro-slavery, anti-black songs in the American lexicon.” The organization wrote a resolution to rescind “The Star-Spangled Banner” as the national anthem. As of January 2018, it was still seeking support for its efforts in the California Legislature.

“The song is wrong,” California NAACP chapter president Alice Huffman told CBS News. “It should never have been there, and just like we didn’t have it until 1931, it won’t kill us if it goes away.”

Christopher Wilson, a director at the Smithsonian’s National Museum of American History, wrote in a piece for Smithsonian.com, “’All Men are Created Equal’ and ‘The Land of the Free’—both those mottos sprang from the pens of men with quite narrow views of equality and freedom.”

In the piece, Wilson discussed the paradox of Thomas Jefferson writing the Declaration of Independence while owning 175 slaves and makes comparisons to Key, who seems to have gotten a pass on his racism. Though Wilson does mention that during his lifetime, abolitionists ridiculed Key’s words, “sneering that America was truly the ‘Land of the Free and Home of the Oppressed.”

According to Wilson, in 1856 Lincoln urged Americans to “re-adopt the Declaration of Independence and with it the practices and policies which harmonize with it.”

“Though we may have forgotten Key’s racism while we remember Jefferson’s, we have similarly washed it away from the song by adopting it as something to live up to. Every time Jackie Robinson stood on the baselines as the anthem was played, or when Civil Rights Movement activists had the flag ripped out of their hands as they peacefully marched, or when my dad saluted the flag at a segregated army base in Alabama fighting for a nation that didn’t respect him, the song became less Key’s and more ours,” Wilson wrote. “Though we should remember the flaws and failings that often animate our history, to me at least, they do not need to define it. We should remember that if, 200 years after it was declared so by a slaveholder and enemy of free speech, the United States is ‘the land of the free,’ that is because of ‘the brave’ who have called it home since dawn’s early light in September 1814.”

Discussion Questions
1. What new information did you learn about “The Star Spangled Banner?”
2. Historically, there have been traditional American songs, poems, salutes and books that have either been protested or banned outright.  What are some examples of this?
3. What do you think about protesting historically American content?  Can American history be more important than the content of a song, poem, salute or book?  Why or why not?
4. Do the racist overtones in the third stanza of the National Anthem justify replacing it with a different song? Why or Why not?
5. If the anthem were to be replaced, which patriotic song would you choose? Why?

Glossary Words:
acquitted: cleared from a charge.
amalgamate: to merge or join.