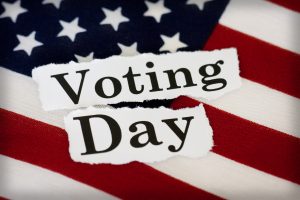 The words “voting day” on an American flag.

According to the National Conference of State Legislatures, 34 states have laws requiring voters to show some form of ID at the polls. Some state laws specifically require photo identification, others states do not. (New Jersey requires no document to vote.)

In the fall 2016 edition of Respect, which was our Special Voting Rights Edition, we tackled the issue of voter ID laws. Since then, we’ve gone through a presidential election where strict voter ID laws went into effect in some states and court decisions were issued regarding voter ID laws in Texas and North Carolina.

Myrna Perez, deputy director of the Brennan Center’s Democracy Program at New York University School of Law, explains that there are particular groups of Americans who have difficulty registering to vote or getting the appropriate ID.

“Eight to 12 percent of Americans do not have the kind of identification that the strictest of these photo ID laws require,” Perez says.

“Instead of competing for votes, some politicians are trying to pass policies so that some people can participate and others can’t,” Perez says. “Strict photo ID laws are ways certain people—poor people, elderly people, students, minorities—can be shaved off the rolls.”

Surgical Precision in the Tar Heel State
In May 2017, the U.S. Supreme Court refused to hear North Carolina’s appeal to reinstate its 2013 voting law, which a unanimous panel of the 4th Circuit Court of Appeals ruled “targeted African-Americans with almost surgical precision.”

Republican lawmakers see the risk of voter fraud as the reason for enacting restrictive voter ID laws. Back in 2016, however, Republican political consultant Carter Wrenn told The Washington Post that the voter fraud argument is just an excuse.

“Of course it’s political. Why else would you do it?” Wrenn said. The Post, which identified him as “a fixture in North Carolina politics” reported that Wrenn didn’t see North Carolina’s law as racist and explained that Republicans, like any political party, want to protect their majority.

“Look, if African-Americans voted overwhelmingly Republican, they would have kept early voting right where it was,” Wrenn said in the article. “It wasn’t about discriminating against African Americans. They just ended up in the middle of it because they vote Democrat.”

With the Court’s refusal to review the case, the 4th Circuit’s ruling stands. In a statement, the North Carolina legislature vowed to enact a new voter ID law.

Intentional Discrimination in the Lone Star State
In Texas, a federal judge ruled in April 2017 that its voter ID law intentionally discriminates against African-American and Hispanic voters, violating Section 2 of the Voting Rights Act (VRA). This is the fifth time the state’s law has been ruled discriminatory.

The fact that the federal court found Texas “intentionally discriminated” and is in violation of the part of the VRA that remained intact after the U.S. Supreme Court struck down parts of it in its Shelby County v. Holder decision, raises the question of whether the Lone Star State’s election practices will be put back under federal oversight.

In her decision, Judge Nelva Gonzales Ramos, of the United States District Court for the Southern District of Texas, wrote, “SB 14 was passed, at least in part, with a discriminatory intent in violation of the Voting Rights Act. The suppression of the overwhelmingly Democratic votes of African-Americans and Latinos was done to provide Anglo partisan advantage.”

This ruling was in line with an earlier decision that Judge Ramos issued on the law. The United States Court of Appeals for the Fifth Circuit affirmed most of that ruling, stating that the law “imposes significant and disparate burdens on the right to vote” and the law “had a discriminatory effect on minorities’ voting rights.” The Fifth Circuit Court asked Judge Ramos to re-examine the case to determine whether the discrimination was intentional.

Lawmakers in Texas revised its voter ID law during the summer. On August 23, 2017, Judge Ramos once again blocked it from becoming law, issuing a permanent injunction. In her most recent ruling, Judge Ramos said that the changes made to the law did not fully address the practices that were “enacted with discriminatory intent—knowingly placing additional burdens on a disproportionate number of Hispanic and African-American voters.” For instance, the revised law, now known as SB 5, allows U.S. passport books and cards as acceptable forms of ID in addition to gun licenses, but still no college IDs. “This feature remains discriminatory because SB 5 perpetuates the selection of types of ID most likely to be possessed by Anglo voters and, disproportionately, not possessed by Hispanics and African-Americans,” Judge Ramos wrote.

In addition, the revised law allows people who lack a required ID to cast a ballot if they sign an affidavit and bring paperwork, such as a bank statement or utility bill, showing their name and address. Judge Ramos took issue with the criminal penalties associated with “lying” on the affidavit, claiming it could have a chilling effect on voters, who, fearful of making an innocent mistake, won’t cast a ballot.

In September 2017, the Fifth Circuit Court, at least temporarily, gave Texas a victory when it voted 2-1 to put the lower court’s ruling on hold until it considers the constitutionality of the state’s revised law.

Voter ID and the Effect on 2016 Turnout
So, do voter ID laws affect turnout on Election Day? The Government Accountability Office, a nonpartisan agency, examined 10 studies on the subject and five showed “no statistically significant effect on turnout.” A study by the University of California, San Diego, however, revealed “Democratic turnout drops by an estimated 8.8 percentage points in general elections when strict photo identification laws are in place.” In a close election, that could be significant.

Glossary Words:
partisan — someone who supports a particular political party or cause with great devotion.
nonpartisan— not adhering to any established political group or party.