Are States “Labs of Democracy?” Yes and No 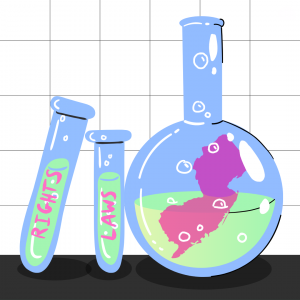 In civics education, generally the U.S. Constitution gets all the attention, but every state has its own constitution too and some of them pre-date the federal constitution.

An often-quoted dissenting opinion, written in 1932 by U.S. Supreme Court Justice Louis Brandeis states: “It is one of the happy incidents of the federal system that a single courageous state may, if its citizens choose, serve as a laboratory; and try novel social and economic experiments without risk to the rest of the country.” This quote from the dissenting opinion in New State Ice Co. v. Liebmann has been cited in more than 3,000 legal articles and academic papers, perpetuating the notion that states are “labs of democracy.”

Emily Zackin, a political science professor at Johns Hopkins University and the author of Looking for Rights in All the Wrong Places, says it is not as simple as Justice Brandeis makes it sound and really depends on what is meant by labs of democracy.

“If you mean can states pioneer new policies, new solutions to pressing political problems, try them out at the state level, then yes absolutely states do that,” Professor Zackin says.

The metaphor, however, is somewhat misleading, according to Professor Zackin who points out that labs are generally sealed off and controlled, while states are much more porous and absorbent.

Legalizing marijuana, first for medical purposes and then for recreational use, is another example of one state instituting a controversial policy and then other states following suit after seeing the results in previous states. California was the first state to legalize marijuana use for medicinal purposes in 1996. In 2012, Colorado and Washington became the first states to legalize recreational use of marijuana.

Today, according to the National Conference of State Legislatures, marijuana is legal for medical use in 36 states and for recreational use in 18 states and the District of Columbia, as well as in the U.S. territories of Guam and the Northern Mariana Islands. In February 2021, New Jersey’s governor signed into law a measure that allows for the recreational use of marijuana by those over the age of 21 after 67% of voters in the Garden State voted for it in 2020. Despite being legal in many states, at the federal level, marijuana is still classified as a Schedule 1 substance under the Controlled Substance Act.

The Needs of a State

Americans derive many rights from the federal constitution, but have you ever stopped to think about the rights you get just from being a citizen of your state? Every state constitution is somewhat tailored to the needs of the state it governs. For instance, water rights and mining rights are outlined in several western state constitutions where those issues are prevalent. Other states, for instance those without mines, would not cover that issue in a state constitution.

In her book, Looking for Rights in All the Wrong Places, Professor Zackin makes the case that positive rights are more explicitly spelled out in state constitutions. According to Professor Zackin, a positive right is one that protects people, not only from the state itself but from other kinds of dangers, such as poverty or environmental catastrophe, creating a mandate to protect people.

A negative right, on the other hand, only protects you from the threat of an overbearing government, Professor Zackin says. For example, the Fourth Amendment would be considered a negative right as it stipulates something the government can’t do, such as illegally search your home or take your possessions without a warrant.

Votes Count at Every Level

So, how can you make sure that the rights and causes that you care about are addressed in your state? One way is to encourage the voters you know to take part in local and state elections (and take part yourself when you’re old enough to vote).

According to U.S. Census data, within the 50 states, there are more than 3,000 counties, nearly 36,000 local governments, including more than 19,500 municipal governments, and more than 16,360 township governments. Those elected to state offices, such as the assembly, governor or state senator, have influence over whether or how state constitutions are amended and what rights are protected.

In addition, local ordinances are maintained across the country that often only affect residents of those areas. That means voting in races that you might sit out, thinking they aren’t important, like mayoral races, town council or school board elections. It is the folks elected to these offices that affect your life on a day-to-day basis.

Professor Zackin contends that the bulk of policymaking, such as policing and education, is done at the state and local levels.

“One of the reasons we find all these provisions that we care about—education, environmental rights—in state constitutions is because states in much of American History, especially in the 19th century, and even now have been responsible for those areas of policy,” Professor Zackin says. “So, voting at the state level really does matter.”

Glossary Words
dissenting opinion: a statement written by a judge or justice that disagrees with the opinion reached by the majority of his or her colleagues.
warrant: a written document from a judge authorizing anything from a search to an arrest to the obligation to pay a fine.