Blowing the Whistle on Criminal Activity 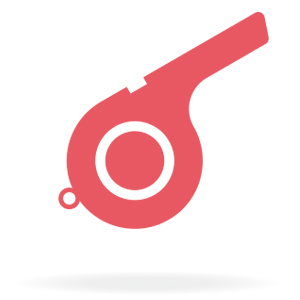 Throughout history, many crimes have been uncovered, not by law enforcement, but by ordinary citizens with a sense of civic responsibility. These citizens are sometimes called whistleblowers. A whistleblower is someone within a private organization or government agency who spots unlawful or unethical activity and reports it to the proper authorities, despite the possible consequences they may face.

“Behind closed doors, particularly at big corporations, it may be difficult for the government to fully understand what might be going on, particularly when actions may be taken to defraud the government,” says Jason S. Kanterman, an attorney and adjunct professor at Rutgers Law School—Camden. “Whistleblower laws allow people with information that may not otherwise be public to come forward and report that information to help the government enforce its laws and protect society.”

Without whistleblowers, many of America’s greatest scandals might not have come to light. For example, in 1974, then President Richard Nixon was forced to resign after a whistleblower provided evidence of his involvement in a break-in at the Democratic National Committee headquarters. The ensuing scandal was called Watergate because the break-in occurred at the Watergate Office Building in Washington, DC. In 1971, Daniel Ellsberg, a former U.S. military analyst and government contractor, became a well-known whistleblower after he released what became known as the Pentagon Papers to The New York Times and The Washington Post. The papers revealed that the government was lying about the Vietnam War, which led to the war’s escalation and more death. More recently, a data manager for the Florida Department of Health went public with her concerns that the state was manipulating COVID-19 statistics, under-reporting the number of cases.

The concept of whistleblowing is far from a modern-day phenomenon. In fact, while the term would not be coined until centuries later, “whistleblower” laws date back to medieval England. Lacking a national police force, the king depended on ordinary citizens to report illegal activity. The legal concept is known as Qui tam pro domino rege quam pro se ipso in hac parte sequitur, which is a mouthful and is Latin for: “He who sues on behalf of our Lord the King and on his own behalf.” Today, whistleblower laws are often referred to as “qui tam” laws.

Ben Franklin is credited with being the first American whistleblower. In 1773, he exposed the corruption of Thomas Hutchinson, the royally appointed governor of Massachusetts. Franklin revealed that the governor was misleading Parliament about the tensions in the colonies and that he had plans to reorganize the American government.

The first national whistleblower law was enacted during the Revolutionary War. In 1777, 10 sailors petitioned the Continental Congress detailing the ruthless and dishonest actions of their ship’s captain, Esek Hopkins, including his mistreatment of British prisoners.

Hopkins was relieved of his command a year later, but sued his accusers—Richard Marven and Samuel Shaw—for libel and the two men were jailed. Marven and Shaw asked the Continental Congress to overturn their punishment, arguing they were only doing their duty.

The Continental Congress agreed, and in 1778 passed a law to protect whistleblowers like Marven and Shaw. The law read: “It is the duty of all persons in the service of the United States, as well as all other inhabitants thereof, to give the earliest information to Congress or any other proper authority of any misconduct, frauds or misdemeanors committed by any officers or persons in the service of these states, which may come to their knowledge.”

This first law offering protection to whistleblowers was passed on July 30, 1778. In July 2020, more than 240 years later, the U.S. Senate passed a resolution proclaiming July 30th as National Whistleblower Appreciation Day. The resolution states that all U.S. agencies should “implement the intent of the Founding Fathers, as reflected in the legislation passed on July 30, 1778” by “informing employees, contractors working on behalf of the taxpayers of the United States, and members of the public about the legal right of a United States citizen to ‘blow the whistle’ to the appropriate authority by honest and good faith reporting of misconduct, fraud, misdemeanors, or other crimes…”

The most well-known and often-cited whistleblower law is the False Claims Act, which was enacted during the Civil War in 1863. The Union Army learned it was being provided sub-standard supplies by wartime contractors, including poorly made uniforms and artillery shells loaded with sawdust instead of gunpowder. President Abraham Lincoln signed a measure into law that enabled private citizens to report fraud to the government and receive an award for doing so. The False Claims Act, sometimes called the Lincoln Law, still stands today.

Under the False Claims Act, the person who reports the wrongful activity, known as the relator, is eligible for up to 30 percent of the fine or recovered funds if the government is successful in prosecuting the fraudster.

“The government found that once they empowered people who were observing the fraud to come forward and expose it, it does cut down on the corruption that may be taking place in government contracts,” explains Sharon Eubanks, chief counsel of the National Whistleblower Center, a nonprofit, nonpartisan advocacy organization that supports whistleblowers in their efforts to bring illegal activity to light. “The thought being the government would not have known the details to be able to stop the fraudsters without that individual coming forward.”

In 1989, Congress passed the Whistleblower Protection Act (WPA), which laid out a process where federal government employees can report fraud and wrongdoing in their agency to members of Congress. The law’s purpose was to “strengthen and improve protection for the rights of federal employees, to prevent reprisals, and to help eliminate wrongdoing within the government.” The law has been strengthened several times since its inception.

Kanterman, whose law practice includes False Claims Act litigation, says there is a key difference between the WPA and the Federal Claims Act. “The WPA seeks to protect federal employees who report fraud, whereas the False Claims Act is geared more toward the private sector, such as suppliers who provide some sort of private service or good to the government.”

In 1998, Congress enacted a separate whistleblower law for the intelligence community or those who work in national security. Known as the Intelligence Community Whistleblower Protection Act (ICWPA), the law allows intelligence community staffers to report wrongdoing to the agency’s Inspector General even if it involves classified information, according to the Brennan Center for Justice. The Brennan Center points out that the ICWPA does not protect whistleblowers from retaliation.

In addition to federal law, states can have separate whistleblower protection laws. One Massachusetts whistleblower law, dating back to 1686, rewards inspectors with one-third of collected fines for reporting fraud. In 1986, New Jersey passed the New Jersey Conscientious Employee Protection Act, which protects employees from being fired, demoted or harassed because they objected to a legal violation within their company. In 2008, New Jersey passed the New Jersey False Claims Act, which allows private individuals to bring a qui tam case on behalf of the state.

“If a local contractor accepts state funds to do a project and then misuses those funds, a whistleblower could come forward under the New Jersey False Claims Act and report that misappropriation of state funds,” Kanterman notes.

During 2020, the Department of Justice recovered more than $2.2 billion under the False Claims Act, according to data published on its website. Of that money, $1.6 billion was recovered with the help of whistleblowers. Those whistleblowers received a total of $309 million in awards.

False Claims Act cases are filed under seal, meaning the general public cannot view the lawsuit. When filed, only the government, the judge assigned to the case, the relator and their lawyer know of the complaint. The subject of the case is not alerted.

“The reason for that is the allegations in the complaint may be sensitive, so they leave them under seal,” Kanterman explains. “It gives the government an opportunity to talk to the whistleblower and conduct its own investigation to see if there is any validity to the charges.”

Existing whistleblower laws make it easier for people to come forward, protecting them from workplace retaliation such as firing, demotion or harassment; however, Eubanks says whistleblowers still take a risk in exposing fraud. A Marist poll conducted in 2020 revealed that more than 80 percent of Americans believe Congress should pass stronger laws to protect employees who report corporate or government fraud.

In his book, Crisis of Conscience: Whistleblowing in an Age of Fraud, author Tom Mueller interviewed more than 200 whistleblowers and revealed to Time Magazine that the “overwhelming majority” of them could not find work in their respective industries because they were blackballed.

“It’s an act of courage when people come forward and report knowing that they might still face retaliation,” Eubanks says.

“We shouldn’t need a special word [whistleblower], some weird legal status, for doing the right thing, for doing our jobs,” Mueller told Time. “Whistleblowing is democracy. It’s freedom of speech. It’s independence of conscious—the kinds of things the framers had in mind.”

Glossary Words
libel — something that is published (that is untrue) which damages a person’s reputation.
nonpartisan— not adhering to any established political group or party.
overturned —in the law, to void a prior legal precedent.