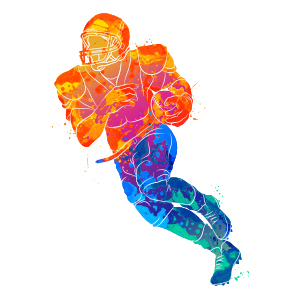 In 2019, college athletics generated nearly $19 billion for colleges and universities, according to the National Collegiate Athletic Association (NCAA), the nonprofit organization that regulates student athletes. The NCAA maintains that more than 480,000 students in nearly 1,300 colleges or universities across the country compete at the collegiate level, with the largest numbers in football and men’s basketball.

According to Forbes magazine, college football’s 25 top teams alone generate revenue upwards of $2.5 billion, clearing $1.4 billion after expenses. Compensation for the players is not one of those expenses, though many feel they should be rewarded in some way since they are providing the labor. Others feel that student-athletes are getting a quality education at a top tier university and that should be compensation enough.

An NCAA study revealed that college athletes average 40 hours per week just on athletic commitments while their sport is in season. Other studies have put that number closer to 60 hours per week. Athletes must also keep up with their course work in addition to the time spent on athletics or risk being cut from the team and losing their athletic scholarships.

NCAA rules for student-athletes are lengthy and include, among other things, academic requirements, as well as restrictions on employment and accepting gifts. College athletes and players’ rights proponents have been seeking fair market pay and name/image/likeness rights (also known as NIL rights) for years to no avail. NIL rights means that athletes’ names, images or likenesses could not be used without their consent and/or without compensation. For example, a video game could not use images of college players either in the game itself or in advertising/marketing without paying the athletes.

“The NCAA does not permit universities to pay athletes for their NIL or their ‘labor’ for actually playing the sport,” explains Camille Spinello Andrews, a professor at Rutgers Law School—Camden with an expertise in sports and entertainment law.

“Revenue-sharing is practiced in college athletics…it just does not include the athlete,” Grantham wrote in a March 1990 editorial for The New York Times. “It is disgraceful to think that in our capitalistic society that allegedly rewards uniqueness of talent, these athletes who are in such great demand cannot be compensated in some form.”

In an audited financial report, the NCAA reported more than $1 billion in revenue for the 2016-2017 season. That revenue was generated mainly by ticket sales, marketing rights, television contracts and sports tournaments like March Madness. The NCAA also reported in its documents that in 2018-2019 a combined $549 million was paid to conferences and colleges who made it to the top six bowl games—the Rose, Sugar, Orange, Fiesta, Peach and Cotton bowls.

In addition, according to available published reports, the five largest conferences, known as the Power Five, include 4,400 coaches who earn a combined $1.2 billion. Sports Illustrated reported that Nick Saban, the head coach for the University of Alabama’s football team, is the highest paid with a salary of over $9 million.

The National Bureau of Economic Research conducted a study to see how much money college athletes could potentially make if they were compensated via revenue-sharing similar to professional athletes. In one example, the study found that every starting basketball player for a team represented in the Power Five could potentially earn between $800,000 and $1.2 million per season, depending on the school and the percentage of revenue shared.

A 2019 survey conducted by the polling platform College Pulse revealed that most college students support paying college athletes in some form, with some believing they deserve an actual salary.

Compensation for student-athletes could soon take many forms, as the NCAA is considering changing its age-old rules to grant student-athletes name, image, and likeness (NIL) pay. In October 2020, the NCAA Division 1 Council approved proposed NIL rules that would give college athletes certain NIL marketing rights, including: using their NIL to promote camps and clinics, private lessons, their own products and services, and commercial products or services; permission to be paid for their autographs and personal appearances; and authorization to crowdfund for nonprofit or charitable organizations, catastrophic events and family hardships, and/or educational expenses not covered by the cost of attendance.

The NCAA was prompted to take action after California, in November 2019, passed its Fair Pay to Play Act, which is scheduled to go into effect in 2023 and allows college athletes to make money from endorsement deals. Other states, including Colorado, Florida and Nebraska have already adopted NIL legislation and more states are expected to follow suit.

The Garden State passed its law in September 2020. The New Jersey Fair Play Act protects student-athletes attending New Jersey colleges and universities by allowing them to earn financial compensation from third-party companies for the use of their name, image and likeness (NIL). The law also permits student-athletes to hire an attorney or agent without jeopardizing their scholarship eligibility. While New Jersey’s law is “effective immediately,” the provisions don’t kick in for five years, or until 2025. Professor Andrews believes this was done to “allow schools to fully cycle through all current athletes.”

Even with its proposed rule changes, the NCAA will still place limitations on potential NIL income sources. Athletes, for example, cannot use their school’s logos or trademarks, or endorse products/services that conflict with current NCAA rules, such as sports betting and banned substances. Additional refinements to the NCAA’s proposal could still be made before its final vote scheduled for January 2021. The conclusive regulation would then take effect in August 2021, according to the NCAA.

Tim Nevius, a former NCAA investigator and lawyer who founded the College Athletic Advocacy Initiative and Nevius Legal, is an ardent supporter of compensating college athletes.

“Restricting economic opportunities [for student-athletes] while they are in college and they’re adored by fans across the country is unconscionable,” Nevius says.

He is skeptical of the NCAA’s motives in instituting these new rules, saying the organization has resisted providing athletes with marketing rights for years and will push for a federal bill that defers to its own rules.

“The only reason the NCAA came around to this was because of the pressure from states like California passing legislation,” Nevius says.

There are currently four bills being considered in Congress. All would allow student-athletes the right to capitalize from their name, image and likeness and some would grant the NCAA the antitrust exemption they’ve been lobbying for.

A bill, called the College Athlete’s Bill of Rights, introduced by New Jersey Senator Cory Booker, a former college athlete himself, would not only grant athletes NIL rights, but is the only federal legislation containing a provision that would give athletes a share of the profits generated from their sports. That would mean if a sport turns a profit after expenses, the revenue would be shared equally among scholarship players.

In addition, Senator Booker’s bill, which is co-sponsored by Senators Kirsten Gillibrand of New York and Richard Blumenthal of Connecticut, along with Representative Jan Schakowsky of Illinois in the House of Representatives, would extend athletic scholarships for as long it takes to receive a degree no matter if the student-athlete is eligible to play. The bill would also extend healthcare coverage for athletes to cover sports-related injuries five years after their playing time expires.

Congress may not have much time to act. Florida’s statute is scheduled to take effect on July 1, 2021, which means that Sunshine State schools could potentially play by different rules in the fall.

Another factor that could affect any possible legislation is that the U.S. Supreme Court agreed to review a Ninth U.S. Circuit Court of Appeals decision in National Collegiate Athletic Association v. Alston, which was handed down in May 2020. The ruling held that the NCAA violated antitrust laws when it refused to permit non-cash, education-related benefits for athletes. Those benefits would include, for example, gifts of computers or study abroad and post-graduate scholarships, as well as paid internships. The NCAA appealed the decision to the U.S. Supreme Court, who will likely hear oral arguments in the case by April 2021, with a decision expected before its term ends in June 2021.

Professor Andrews says that if the Court comes down on the side of student-athletes, competition would be opened up.

“Schools and conferences could now optionally decide if they want to offer education-related benefits in competing for certain athletes,” she says.

On the other hand, if the Court sides with NCAA and overturns the Ninth Circuit’s decision, the restrictions on competition will stay in place, as well as the amateur status that the NCAA wants to maintain.

“In a multi-billion dollar industry very different from the 1906 industry that led to the original creation of the NCAA, the argument in favor of amateurism is becoming very difficult to maintain,” Professor Andrews says. “Yet, NCAA concerns are not wholly without merit. What if an internship with a favored alum pays $500,000? Presumably, only reasonable compensation would be allowed, but there are a lot of murky questions in defining ‘education-related’ benefits.”

Glossary Words
antitrust laws—federal laws that regulate big business with the intention of promoting competition to benefit consumers.
appealed— when a decision from a lower court is reviewed by a higher court.
overturned —in the law, to void a prior legal precedent.
statute — legislation that has been signed into law.