Freedom of Speech Vital to Democracy 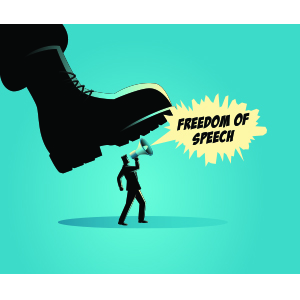 Supreme Court Justice Benjamin Cardozo wrote in a majority opinion that freedom of speech “is the matrix, the indispensable condition of nearly every other form of freedom.”

Other countries don’t enjoy the same right to free speech that Americans do. But it wasn’t always that way in the USA.

Since the nation’s early beginnings there have been government efforts to curb free speech. For example, in 1798 President John Adams signed into law the Alien and Sedition Acts, a series of four laws that curtailed immigration and prohibited opposition to the government by, among other things, forbidding protest and censoring the press. Citizens could face jail if they were to “write, print, utter, or publish…any false, scandalous and malicious writing” against the government.

Whether the statements were true or not didn’t matter and ultimately 25 citizens, including some journalists and one legislator, were charged with sedition. The Act was never challenged in the courts and expired when President Adams left office. When President Thomas Jefferson took office in 1801 he pardoned the 10 people who had been convicted under the Act.

During World War I, efforts were made to curb Americans’ free speech, especially in speaking out against the war. In a message to Congress after war was declared with Germany, President Woodrow Wilson called for a “redefinition of national loyalty.” The President said there were “millions of men and women of German birth and native sympathy who live amongst us,” and “if there should be disloyalty, it will be dealt with a firm hand of repression.”

Congress passed the Espionage Act of 1917 two months after the declaration of war. The Act allowed postal officials to ban newspapers from the mail and stated that anyone convicted of obstructing the draft would face a $10,000 fine and up to 20 years in jail. Congress also passed the Sedition Act of 1918, which made it a federal offense to use “disloyal, profane, scurrilous, or abusive language” about the U.S. Constitution, the government, the American uniform or the flag. There were more than 2,000 prosecutions under these two acts with more than 1,000 convictions. The constitutionality of the acts was challenged at the U.S. Supreme Court, which issued a number of free speech rulings in 1919, always coming out on the side of government.

For example, in Schenck v. U.S., the Court ruled that government can restrict expressions that “would create a clear and present danger that they will bring about the substantive evils that Congress has a right to prevent.” In Abrams v. U.S., the Court decided that the First Amendment didn’t protect printing leaflets urging resistance to the war effort and in Debs v. U.S. the Court ruled that anti-war speech designed to impede recruiting was not protected. All of the defendants in these cases were convicted under the Espionage Act of 1917.

Another free speech case, Whitney v. California, came before the Supreme Court in 1927. Charlotte Anita Whitney had been convicted under California’s Criminal Syndicalism Act for helping to establish the Communist Labor Party of America in the state. The Court upheld her conviction, ruling that California had not violated her free speech rights because states may prohibit speech that incites crime or disturbs the peace or threatens the overthrow of the government.

While Whitney was decided in favor of the government, it was Justice Louis Brandeis’ concurring opinion in the case that would change the tide of the Court’s views on free speech.

“If there be time to expose through discussion the falsehood and fallacies, to avert the evil by the process of education, the remedy to be applied is more speech, not enforced silence,” Justice Brandeis wrote.

The Court would overturn Whitney in 1969 with its decision in another free speech case and Justice Brandeis’ concurrence would be cited in more than 300 federal and state free speech cases.

Without Saying a Word

The Supreme Court weighed in on symbolic speech or freedom of expression with its ruling in the 1969 case of Tinker v. Des Moines. The case involved Mary Beth Tinker, a 13-year-old student at a junior high school in Des Moines, Iowa. She and four other students, including her brother John, were suspended for wearing black armbands to school in protest of the Vietnam War. Tinker’s parents sued the school claiming it violated the students’ free speech rights. The case ended up before the U.S. Supreme Court where in a 7-2 decision the justices sided with Tinker. In the Court’s majority opinion, Justice Abe Fortas famously wrote that students, as well as teachers, do not “shed their constitutional rights to freedom of speech or expression at the schoolhouse gates.”

It is because of the Tinker ruling that the American Civil Liberties Union and other advocacy groups have successfully defended students’ rights to wear armbands protesting other causes, as well as, among other things, the right to wear pro-LGBTQ T-shirts to school.

It is important to note that the First Amendment only protects your freedom of speech from government censorship. This applies to federal, state and local government, which includes public schools, public universities or any entity that accepts federal money. The First Amendment does not provide protections against private businesses, organizations or schools. That means what is prohibited in a public school on free speech grounds would not be prohibited in a private one. For example, a private school could suspend a student for publicly criticizing school policy or an employer could potentially fire an employee for expressing his or her political views while on the job.

Legal scholars will tell you that no right is absolute and there are limits to freedom of speech. Lata Nott, a fellow at the Freedom Forum in Washington, DC and an attorney specializing in First Amendment issues, says there are nine free speech exceptions that have been carved out by the U.S. Supreme Court. They are: obscenity, fighting words, defamation, child pornography, perjury, blackmail, incitement to imminent lawless action, true threats and solicitations to commit crimes. Nott also notes that some experts would add treason to the list if committed verbally. Plagiarism of copyrighted materials is also not protected.

What About Hate Speech

Many Americans think that the First Amendment should not protect hate speech and some are under the misunderstanding that it doesn’t.

“There’s certainly an argument to be made that some speech isn’t worth listening to, or that hate speech can intimidate the people it’s directed towards, thus having a chilling effect on their speech,” Nott says. “But the reason that the First Amendment protects hate speech is because of just how difficult it is to draw a line between free speech and hate speech, or even come up with a universal definition of what hate speech is.”

Carving out a First Amendment exception for hate speech, Nott says, would involve the government deciding what type of speech is too offensive to be heard.

“Once you grant the government that power, it’s easy for it to be used to stifle protest and dissent,” she says.

The Supreme Court has weighed in on hate speech as well with the 2011 case of Snyder v. Phelps. Fred Phelps, the now-deceased leader of the Westboro Baptist Church, believed that God punishes the U.S. for its tolerance of gays in the military and often picketed, along with his followers, at the funerals of soldiers. They would hold signs with hateful messages and shout those messages as well. Albert Snyder, whose son Lance Corporal Matthew Snyder was killed in Iraq, sued Phelps and the Westboro Baptist Church after they picketed his son’s funeral. The Court sided with Phelps and the church in an 8-1 decision.

In his majority opinion, Chief Justice John Roberts called the signs “particularly hurtful” but noted that the picketing was in a public area.

“Such speech cannot be restricted simply because it is upsetting or arouses contempt,” Chief Justice Roberts wrote. “If there is a bedrock principle underlying the First Amendment it is that the government may not prohibit the expression of an idea simply because society finds the idea itself offensive or disagreeable.”

Glossary Words
concurring opinion: a separate opinion delivered by one or more justices or judges that agrees with the decision of the court but not for the same reasons.
convicted: declared guilty by the verdict of a jury or decision of a judge.
draft: compulsory recruitment for military service.
majority opinion: a statement written by a judge or justice that reflects the opinion reached by the majority of his or her colleagues.
overturn: to void a prior legal precedent.
scurrilous: insulting.
sedition: conduct or speech inciting rebellion against authority.
substantive: important, meaningful or considerable.
syndicalism: a revolutionary doctrine where workers seize control of the economy and the government.