Freedom of the Press Guards Against Tyranny 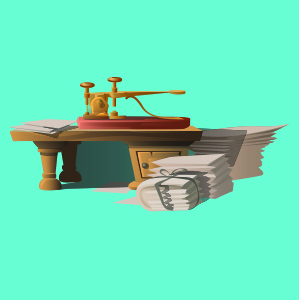 Thomas Jefferson once said, “Our liberty depends on the freedom of the press, and that cannot be limited without being lost.” He also said, “Nothing can now be believed which is seen in a newspaper. Truth itself becomes suspicious by being put into that polluted vehicle.” So, it was sort of a love/hate relationship.

Still, the Framers of the U.S. Constitution safeguarded press freedom by enshrining it in the First Amendment. Lata Nott, a fellow at the Freedom Forum in Washington, DC and an attorney specializing in First Amendment issues, says that’s because the Founding Fathers had vivid memories of the British government censoring American newspapers.

“They had a clear understanding that a free press was necessary to serve as a watchdog on government and keep it from descending into tyranny and corruption,” Nott says.

That understanding may have been influenced by the trial of John Peter Zenger in 1735. Zenger was a printer and published The New York Weekly Journal. The newspaper was quite critical of William S. Cosby, New York’s royal governor at the time, and reported on many incidents of corruption connected to him.

As publisher of the newspaper, Zenger was charged with libel. To be convicted of libel in those days the only proof needed was that the accused actually published or printed the “libelous” information, something that Zenger admitted. The validity or truth of the reporting didn’t matter. Today, the bar for proving libel is higher (more on that later).

In his appeal to the jury, Zenger’s attorney, Andrew Hamilton (no not that Hamilton) argued that their verdict wasn’t just about Zenger.

“It is not the cause of one poor printer, nor of New York alone, which you are now trying,” Hamilton said. “It may in its consequence affect every free man that lives under a British government on the main of America. It is the best cause. It is the cause of liberty.”

Despite instructions from the judge that they were only to decide the question of whether Zenger had in fact published the issues of the newspaper in question, the jury came back with a verdict of not guilty. Historians believe it is because of this trial and verdict that other publishers felt liberated to print the truth in their newspapers, which aided the course of revolution.

The press is often referred to as the Fourth Estate. The term dates back to 1787 England and is credited to Edmund Burke, a statesman and member of Parliament. Burke was remarking on the Parliament’s House of Commons being opened to newspaper reporting. He reportedly pointed to the reporter’s gallery and said, “There were three estates in Parliament, but in the Reporters Gallery yonder, there sat a Fourth Estate more important far than they all.”

In the United States the three estates refer to the three branches of government—legislative, executive and judicial. The press, and all forms of news media, is considered the Fourth Estate and seen as providing a check on elected leaders.

The press is not always revered and has been accused of sensationalism and distorting facts. Today, some citizens, as well as elected officials, call some press “fake news.” Before “fake news” the term used was “yellow journalism.”

The yellow journalism description dates back to the 1890s and came out of a newspaper war in New York between titans of publishing, William Randolph Hearst and Joseph Pulitzer. At the time, both publishers were trying to boost the circulation of their newspapers—New York World (Pulitzer) and New York Journal (Hearst). The papers used sensational and often misleading headlines; faked interviews and comic strips to do it. It was actually the comic strip, The Yellow Kid, published in both newspapers that gave birth to the name “yellow journalism.”

In a 1958 journal article about the New York press, Sidney Pomerantz, a professor at City College of New York, quotes a trade publication for the newspaper industry in 1898, which wrote, “The public is becoming heartily sick of fake news and fake extras. Some of the newspapers in this town have printed so many lying dispatches that people are beginning to mistrust any statement they make.” Professor Pomerantz goes on to say that by the turn of the century yellow journalism was on the decline, although some aspects, including banner headlines and color comics, remain to this day.

So, does freedom of the press protect yesterday’s “yellow journalism” and today’s “fake news?” Nott says it does.

“The First Amendment protects lies, which makes it extremely difficult for the government to stop something from being published,” Nott says. “But a publisher who runs a false statement of fact that damages someone’s reputation can be sued by that person for libel afterwards.”

Press and the Courts

Harkening back to the criticisms of yellow journalism, the press is also criticized for the way it covers criminal trials, with some believing it jeopardizes the right to a fair trial.

According to Nott, the First Amendment implicitly guarantees the right for the press to attend criminal proceedings, which allows them to report on matters of public concern and also serve as a watchdog on the courts. However, Nott also acknowledges that press coverage of a criminal case can have an adverse impact on a person’s right to a fair trial, including when the media publishes information before a trial that prejudices potential jurors, or when media coverage sensationalizes the proceedings, turning them into entertainment.

Nott says that the U.S. Supreme Court has provided guidance on squaring freedom of the press and a defendant’s right to a fair trial.

“Sometimes judges will sequester juries to keep them from publicity, or allow for a change of venue to make sure that the jury is unbiased,” Nott says. “Judges can also issue gag orders to keep people from talking about the case, but that’s considered an extreme remedy that’s only restricted to situations where there is intense publicity and no alternative measures are possible.”

One of the most important U.S. Supreme Court cases affecting freedom of the press was the 1964 decision in New York Times v. Sullivan. The case involved a full-page ad, taken out by supporters of Martin Luther King Jr., that The New York Times published in 1960. The ad criticized the police and other elected officials in Montgomery, Alabama for the mistreatment of civil rights protesters. The copy of the ad contained some factual errors and Montgomery Police Commissioner L.B. Sullivan sued the newspaper for defamation (libel). An Alabama court awarded Sullivan $500,000 in damages and the Supreme Court of Alabama affirmed that ruling. The Times appealed the decision to the U.S. Supreme Court.

In a unanimous decision, the U.S. Supreme Court ruled that public officials must prove actual malice on a newspaper’s part in order to claim damages for false defamatory statements.

In the Court’s majority opinion, Justice William Brennan wrote, “We consider this case against the background of a profound national commitment to the principle that debate on public issues should be uninhibited, robust and wide-open, and that it may well include vehement, caustic, and sometimes unpleasantly sharp attacks on government and public officials.”

The Court’s ruling introduced a new First Amendment test for determining defamation or libel. “The constitutional guarantees require, we think, a federal rule that prohibits a public official from recovering damages for a defamatory falsehood relating to his official conduct unless he proves that the statement was made with ‘actual malice’—that is, with knowledge that it was false or with reckless disregard of whether it was false or not.”

According to Freedom House, an independent watchdog organization dedicated to expanding freedom and democracy on a global scale, “media freedom has been deteriorating around the world for the past decade.” In its 2019 report, titled Freedom and the Media, Freedom House maintains that only 13 percent of the world has what would be termed a free press, which is defined as an environment where political news coverage is tough and there are safety protections for journalists.

Despite America’s issues with so-called “fake news” and our past of yellow journalism, Freedom House says that other countries look to the United States as a shining example of freedom of the press.

“Press freedom is one of the most fundamental pillars of American democracy, and constitutional protections in the United States are stronger than in any other country in the world.” However, they caution that U.S. citizens could forget this with all the “mudslinging and incendiary commentary” directed at the press. Freedom House urges U.S. leaders and teachers to “reiterate the extent to which we all benefit from professional journalists who hold those in power to account.”

Glossary Words
appealed: apply to a higher court for a reversal of a lower court’s decision.
libel: a false defamatory statement that is published, which damages a person’s reputation.
malice: a deliberate wrongful act with the intention of causing an injury.
prejudices: makes someone, in this case a potential juror, biased.
sequester: isolating a jury to keep them away from the public or media coverage of the trial.
tyranny: power used in a cruel or unfair manner; oppression.
verdict: the outcome of a trial; the decision of a jury.