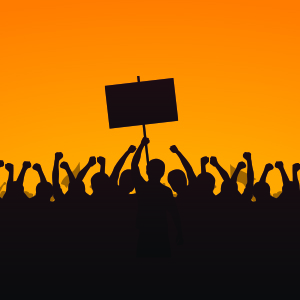 From the Boston Tea Party in 1773 to the Black Lives Matter Movement today, Americans have met oppression with protest. The Founding Fathers believed strongly in a citizen’s right to express dissent, preserving the right in the First Amendment to the U.S. Constitution.

Cedric M. Powell, a professor at Louis Brandeis School of Law and a First Amendment expert, says that the amendment protects many forms of speech and expression. He notes that the five freedoms protected by the First Amendment—speech, press, religion, assembly and petition—build upon and reinforce each other.

In this article, we’re going to focus on the freedoms of assembly and petition. Let’s start with petitioning the government.

The First Amendment stresses the right to “petition the Government for a redress of grievances.” The right dates back to 13th Century England’s Magna Carta, which acknowledged “the right of subjects to petition the king.”

In the Declaration of Independence, sort of America’s final list of official grievances to the king, the colonists wrote: “In every stage of these Oppressions we have Petitioned for Redress in the most humble terms: Our repeated Petitions have been answered only by repeated injury. A Prince, whose character is thus marked by every act which may define a Tyrant, is unfit to be the ruler of a free people.”

King George’s disregard for the colonists’ grievances could be one reason the Framers felt strongly that the right should be included in the Bill of Rights. The U.S. Supreme Court has said that the right to petition the government is “among the most precious liberties safeguarded by the Bill of Rights.” Examples of rights derived from the First Amendment’s petition clause are the right to file lawsuits, institute letter-writing campaigns (whether snail mail or email), and collect signatures for ballot initiatives or referendums. Essentially, any public expression of grievances intended to provoke government action is protected under the petition clause.

American citizens took advantage of the right of petition to advocate for the end of slavery in the United States, specifically in the capital of Washington, DC. Since the capital was on federal land, it was within the authority of Congress to abolish slavery within its borders; however, the idea angered the Southern members of Congress.

In the mid-1830s, Congress received more than 130,000 petitions from abolitionists requesting an end to slavery. In 1836, the House of Representatives passed a resolution that automatically postponed action on all anti-slavery petitions. John Quincy Adams, the former President of the United States who then served as a Massachusetts congressman in the House, led the Northern initiative to rescind the resolution, pointing out that it stifled the right to petition. The “gag rule,” as it was called, was lifted in 1844.

Professor Powell believes that protesting can move the country forward by allowing all citizens to express their ideas, to engage issues in the public square and diffuse the potential for violence because all viewpoints are given a full hearing.

“Protest also highlights flaws in our democracy, it uncovers structural inequality, and it offers ideas for progressive social change,” Professor Powell says. “Protest helps our democracy function, it tells our leaders that they should consider different policy choices so that all citizens are included.”

Freedom of association also derives from the First Amendment’s right to assemble. The U.S. Supreme Court reinforced the right with its 1958 decision in NAACP v. Alabama. The State of Alabama wanted to prevent the NAACP from conducting business in the state and issued a subpoena for the organization’s membership list. The Court ruled that the request violated the 14th Amendment. The Court held: “The freedom to associate with organizations dedicated to the advancement of beliefs and ideas is an inseparable part of the Due Process clause of the 14th Amendment.”

Professor Powell says, “An engaged citizenry needs to be able to form coalitions, reach out to groups, form alliances and friendships, and all of this is based upon the freedom to associate. Citizens also need to be able to get together to go to the public square to express their viewpoints; and, they need to do so together as an assembled group.”

Right to Protest not Unlimited

So, if the right to protest is protected, why are so many protesters arrested? Professor Powell says that is because there are limits to peaceful protest.

“The government cannot tell protesters what to say or how to say it, but it can regulate the time, place, and manner of that expression,” he says.

Protesters can peacefully assemble and protest in front of the courthouse or city hall, Professor Powell says, but the government, in the form of law enforcement, can intervene when political protest moves into unlawful conduct.

“For example, burning a police car is certainly a form of ‘protest,’ but it is unlawful criminal conduct and a protester would not have a First Amendment defense to this criminal act,” Professor Powell says.

Is Looting and Destruction Part of Protesting?

While looting is not protected under the U.S. Constitution, many historians point out that the Boston Tea Party was just that. The colonists dumped 45 tons of tea into Boston Harbor, which was worth an estimated $1 million. That would be considered destruction of property, and Professor Powell notes that the First Amendment would not have protected that destruction.

Today, political scientists and sociologists contend that views on looting and destruction of property depend on who is doing the looting and destruction. For example, the colonists are thought of as patriots and the Tea Party a valiant demonstration of rebellion. But the protests sparked by the death of George Floyd at the hands of the Minneapolis police, and the hundreds of other protests in response to the numerous deaths of unarmed Black people at the hands of law enforcement across the country, are not thought of in the same way.

In an article for The Atlantic, Lorenzo Boyd, the director of the Center for Advanced Policing at the University of New Haven, explained how sometimes destruction of property is a way to get attention for a cause.

That type of protest can be risky, according to Professor Powell.

“Destruction of property is not protected as protest or political speech,” he says. “It is criminal conduct, and the mere fact that it is done as ‘protest’ does not mean that it is not criminal conduct. Under the First Amendment, there is a distinction between speech, which is protected, and conduct, which is unprotected and can be regulated by the government.”

Glossary Words
abolitionist: someone who opposes slavery.
dissent: disagreement in opinion.
gag rule: a regulation or directive prohibiting public discussion of a certain matter.
looting: stealing goods from a place, usually during a riot.
redress of grievances: a resolution to problems or complaints.
rescind: revoke, cancel or repeal.
subpoena: a summons to appear in court or produce documents.