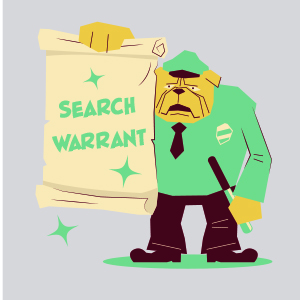 In 1763, William Pitt, the 1st Earl of Chatham, gave a speech in Parliament’s House of Lords where he said: “The poorest man may in his cottage bid defiance to all the forces of the Crown. It may be frail—its roof may shake—the wind may blow through it— the storm may enter—the rain may enter— but the King of England cannot enter! All his forces dare not cross the threshold of the ruined tenement!”

The Framers of the U.S. Constitution may have had that speech in mind when they came up with the Fourth Amendment, which is all about privacy. The amendment states: “The right of the people to be secure in their persons, houses, papers, and effects, against unreasonable searches and seizures, shall not be violated, and no Warrants shall issue, but upon probable cause, supported by Oath or affirmation, and particularly describing the place to be searched, and the persons or things to be seized.”

According to Melanie D. Wilson, a professor at The University of Tennessee College of Law and a Fourth Amendment expert, constitutional scholars aren’t sure why the Framers chose to include the word “effects” in the Fourth Amendment, and notes that the U.S. Supreme Court hasn’t specifically defined the word.

“From the Court’s many cases, we can infer that it means personal property. The Court has used the term when discussing a Jeep, luggage, a package and cell phones,” Professor Wilson says. “The word ‘papers’ was included by the Framers after the government in England used a broad, general warrant to initiate a prosecution of a politician and his supporters, using that warrant to arrest multiple suspects and to seize their papers as evidence.”

The Framers couldn’t anticipate phones, let alone cell phones, so how can the Fourth Amendment be applied today?

Professor Wilson says that rather than using narrow language, the Framers wrote the Fourth Amendment in “broad terms of reasonableness.” As a result, she says the amendment is holding up well in the technological age, applying to technology that the Framers could not have imagined.

“More specifically, the language requiring that searches and seizure of ‘effects’ be reasonable, includes new technology, such as cell phones,” Professor Wilson says. “In fact, in 2014, the U.S. Supreme Court decided a case, Riley v. California, in which it declared that when police search someone’s cell phone, they need either a warrant from a judge or an emergency excusing such a warrant. In other words, the Fourth Amendment has not been redefined for technology, but fortunately, its language is flexible enough to cover the technology age.”

The Fourth Amendment also protects digital property, known as electronic information and data, just like any other property, Professor Wilson says. Again, she points to the Supreme Court’s decision in Riley v. California.

“In that case, the Court held that all of the data, including videos, photos, notes, emails, text messages, and other electronic records, on the cell phone of a man lawfully arrested was protected by the Fourth Amendment,” she says. “This means that police may not access all of that information unless it is objectively reasonable to do so. And, generally, reasonableness would require that law enforcement officers ask a judge’s permission in the form of a search warrant.”

Professor Wilson cautions that even though the Fourth Amendment generally protects our electronic data, we can lose that protection if we do not guard the private nature of the information.

“Law enforcement officers violate the Fourth Amendment when they intrude on someone’s ‘reasonable expectation of privacy,’” Professor Wilson says. “But, if we knowingly expose our property or electronic data to the public, we cannot claim a reasonable expectation of privacy in that data, and it will not be deemed ‘unreasonable’ under the Fourth Amendment should police search or seize the data.”

For example, Professor Wilson says, if the owner of a cell phone intentionally discards the phone or leaves it in a public place or trash bin without taking steps to protect the data on it, he or she cannot complain should police find the phone and search it for pictures and phone contacts.

While the Fourth Amendment generally prohibits law enforcement from conducting searches without a warrant, before the establishment of what is known as the exclusionary rule, any evidence obtained by police was admissible in a criminal trial if deemed relevant by the trial judge.

The exclusionary rule is a court-made rule that was established in 1914 with the U.S. Supreme Court’s decision in Weeks v. United States. The case involved Freemont Weeks, who was convicted of using the mail for the purpose of transporting lottery tickets, a violation of federal law. When Weeks was arrested, police officers went to his house to search it. They had no search warrant, but a neighbor told them where Weeks kept a key. In two separate searches, both conducted without a warrant, the police seized papers, letters and envelopes belonging to Weeks.

The illegally seized evidence was used against Weeks at trial and he was convicted. On appeal the U.S. Supreme Court unanimously held that the evidence was seized in an illegal search and, therefore, should have been excluded at trial, giving birth to the exclusionary rule.

“The tendency of those who execute the criminal laws of the country to obtain convictions by means of unlawful searches and enforced confessions…should find no sanction in the judgment of the courts which are charged at all times with the support of the Constitution and to which people of all conditions have a right to appeal for the maintenance of such fundamental rights,” Justice William R. Day wrote in the Court’s majority opinion in Weeks. “If letters and private documents can thus be seized and held and used in evidence against a citizen accused of an offense, the protection of the Fourth Amendment declaring his right to be secured against such searches and seizures is of no value, and, so far as those thus placed are concerned, might as well be stricken from the Constitution. The efforts of the courts and their officials to bring the guilty to punishment, praiseworthy as they are, are not to be aided by the sacrifice of those great principles established by years of endeavor and suffering which have resulted in their embodiment in the fundamental law of the land.”

In the 1920 U.S. Supreme Court case of Silverthorne Lumber Co. v. United States, the exclusionary rule was expanded to include the doctrine that would become known as “the fruit of the poisonous tree.” Essentially, the phrase means that if the “tree” is tainted, so is the “fruit.” Said in another way, if a search (that’s the tree) is unlawful, then the fruit (that’s the evidence found) is also unlawful.

Professor Wilson says that the exclusionary rule is one of the primary remedies to discourage police from Fourth Amendment violations. In theory, she says that someone could sue the police for monetary damages or an injunction to stop future violations, but those remedies are not particularly effective for a variety of legal reasons.

“The exclusionary rule, when applied, is a more potent remedy to deter police from engaging in unlawful searches and seizures,” Professor Wilson says. “When the rule is applied, evidence that is ‘the fruit’ of unlawful police actions, meaning evidence found because police searched or seized when they were not allowed to, is excluded from use at trial.”

For example, she says if police conduct an illegal search and find drugs or guns or other incriminating evidence, that evidence cannot be used in the case against the accused.

“If police know that they will lose valuable and important evidence if they act unlawfully, they are less likely to act unlawfully,” Professor Wilson says.

In recent years, Supreme Court rulings have begun to chip away at the exclusionary rule. Professor Wilson says the Court has “done so concerned that police mistakes should not result in guilty people escaping prosecution and punishment.”

For example, she notes, if police arrest a suspect, incorrectly believing there is an active warrant for his arrest, based on a mistake in the police database, any evidence police find on the suspect can still be used at a criminal trial unless it can be proven that police knew they were making a mistake.

“Although our Fourth Amendment protections have not technically been reduced,” Professor Wilson says, “the Supreme Court has reduced the negative consequences to police for violating those rights. As a consequence, police have fewer incentives to err on the side of respecting Fourth Amendment rights when deciding whether to conduct a search or a seizure of us or our property.”

Glossary Words
appealed: apply to a higher court for a reversal of a lower court’s decision.
convicted: declared guilty by the verdict of a jury or decision of a judge.
injunction: an order of the court that compels someone to do something or stops them from doing something.
majority opinion: a statement written by a judge or justice that reflects the opinion reached by the majority of his or her colleagues.
warrant: a written document from a judge authorizing anything from a search to an arrest to the obligation to pay a fine.