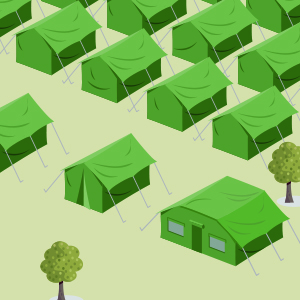 Can you imagine being forced to shelter someone you don’t know in your home indefinitely? We’re not talking about a distant cousin that annoys you by borrowing your stuff without asking. We’re talking about a British soldier that is essentially occupying your house and you’re expected to pay for his upkeep.

In the 1700s, that situation was reality for American colonists and is one of the many reasons they rebelled against the British government.

After the French and Indian War ended in 1763, England decided to keep a standing or permanent army in the colonies to protect its territory. In 1765, the English Parliament passed the first Quartering Act, which required the colonists to incur the cost of providing lodging and provisions for the British soldiers stationed there. That meant finding them acceptable barracks. If barracks weren’t available then the colonists would need to find the soldiers a place to stay whether at an inn, livery stable or a “private building.” In addition, the colonists had to provide “supplies” for the British soldiers, meaning they had to feed them as well. The colonists considered the Quartering Act “taxation without representation,” which was a violation of English law. English law also prohibited the presence of a standing army in times of peace without the consent of the people.

Tensions ran high as the colonists resented the British maintaining a standing army among them. They considered it a threat, and making matters worse, the colonists were made to pay for the army they resented. Things came to a head in Boston in 1770. At the time, thousands of British soldiers were being quartered there among the more than 15,000 Boston citizens. On March 5, 1770 a skirmish between one British soldier and a colonist escalated and when the dust cleared, five colonists were dead. The incident became known as the Boston Massacre and it would fuel the fire of revolution.

After the Boston Tea Party in December 1773, a political protest where the colonists tossed 342 chests of imported tea into Boston Harbor, the British retaliated by passing a second Quartering Act. The Quartering Act of 1774 extended the list of alternative dwellings where British soldiers could be quartered to “private homes.” That meant that if the colonists could not find adequate lodging for the soldiers elsewhere, they were required to open their homes to them. You can imagine this did not sit well with the Americans.

The quartering of soldiers so enraged the colonists it was among the grievances outlined in the Declaration of Independence. So, it was no surprise that the framers of the U.S. Constitution would include in the Bill of Rights an amendment that addressed the issue. The Third Amendment to the U.S. Constitution states: “No Soldier shall, in time of peace be quartered in any house, without the consent of the Owner, nor in time of war, but in a manner to be prescribed by law.”

While the Third Amendment was relevant when it was ratified in 1791, what does it have to offer us today?

The amendment has the distinction of being the least litigated amendment in the U.S. Constitution. Still, the Third Amendment has been cited in lawsuits as evidence that the Founding Fathers valued privacy. For instance, in the 1965 landmark U.S. Supreme Court decision of Griswold v. Connecticut the Court held that, under First, Third, Fourth and Ninth amendment grounds, the U.S. Constitution protected a married couple’s right to use birth control.

In the majority opinion of the Court, Justice William O. Douglas wrote, “The Third Amendment in its prohibition against the quartering of soldiers ‘in any house’ in time of peace without the consent of the owner is another facet of that privacy.”

Some legal scholars claim that the amendment is proof that the framers of the U.S. Constitution meant to protect citizens from government intrusion and suggests a “right to privacy.”

Bernard Bell, a professor at Rutgers Law School and a constitutional law expert specializing in privacy law, doesn’t see the Third Amendment as having very much to do with privacy rights.

He says that while privacy can be hard to define, in terms of constitutional law it can be expressed as autonomy or freedom of action and also as the right to be free from physical intrusions and informational privacy.

“In short, the Third Amendment has little value on any privacy issue other than quartering troops in homes,” Professor Bell says, “and thus is irrelevant to current privacy arguments.”

While the U.S. Supreme Court has given it little attention, the Third Amendment has been interpreted in lower courts. A 1982 ruling in Englblom v. Carey by the U.S. Court of Appeals for the Second Circuit determined that national guardsmen are soldiers and that the Third Amendment can be applied to the states. This decision only set precedent in New York, Vermont and Connecticut.

In 2015, a Nevada district court rejected claims by a Henderson, Nevada family that their Third Amendment rights were violated when the Henderson police seized their home without a warrant. In that case, the court ruled that the police are not soldiers.