High-Tech Not Always Best When It Comes to Voting 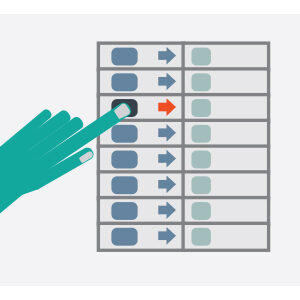 Can you imagine voting in 2020 the way people did in some parts of 19th century America? Men (and it was only white men) swore to a judge that they had not voted before and then shouted out their choice to the waiting clerk, who recorded it in a poll book.

According to the University of Iowa, which compiled “A Brief Illustrated History of Voting,” voice voting continued to be used in Missouri up until 1863. There was no voter registration, no secret ballot and definitely no voting machines.

Using a machine to vote

The first voting machine was introduced in 1892 in Lockport, NY. By the 1930s, while many rural areas were still using paper ballots, most large cities had adopted what was known as lever voting machines, where you pulled a lever for your preferred candidate and your vote was recorded secretly.

The National Conference of State Legislatures (NCSL), a nonpartisan association for public officials, notes that jurisdictions across the country mainly use two types of voting technology—optical (or digital) scanners that count paper ballots or Direct-Recording Electronic (DRE) machines.

With optical scanners, the voter marks a ballot by hand and then it is scanned for tabulation at the polling place or at a central location. When using a DRE voting machine, voters touch a screen and their vote is recorded into the machine’s computer memory. Some of these machines are equipped with the ability to print a paper trail, while others are not.

In April 2020, a bipartisan report from the U.S. Senate Intelligence Committee confirmed that Russia interfered with the 2016 presidential election by spreading propaganda to undermine faith in the democratic process. A similar report released in July 2019, revealed that Russia targeted election systems in all 50 states although there is no evidence that any votes were altered.

Even with all the technology available in 2020, security experts agree that the most secure voting mechanism is paper ballots. The Verified Voting Foundation, an educational nonprofit organization in Philadelphia, is dedicated to safeguarding elections in the digital age.

“Unfortunately, no voting machine is completely tamper-proof from hacking,” Corrie Emerson, Verified Voting’s communications officer, says. “The most secure way to vote is using paper ballots, which are usually counted by a scanner.”

The Brennan Center for Justice at New York University Law School, a nonpartisan law and public policy institute, issued a 2019 report, titled “Voting Machines at Risk: Where We Stand Today.” The report declared an urgent need “to replace antiquated voting equipment.” The authors of the report noted that “older systems are more likely to fail” and are “increasingly difficult to maintain,” which can lead to long lines at the polls.

In 2018, Congress passed the Help America Vote Act (HAVA), which made $380 million available to states. This money helped states and localities strengthen election cyber security and replace the oldest and most vulnerable machines. According to the Brennan Center report, however, that money “only scratches the surface” of what is needed. Even after the distribution of HAVA money, the Brennan Center reported that nearly two dozen states don’t have “adequate funds” to replace their voting equipment before the 2020 election.

The report also revealed that many voting machines are “reaching the end of their lifespan” and are more open to cyber attacks. Nearly a dozen states, including New Jersey, still use paperless electronic machines in some counties and towns. These older machines do not leave paper trails or any backup of a person’s vote.

The Verified Voting Foundation advocates for having emergency paper ballots on hand in polling places on Election Day if technology fails so that people will still be able to cast their votes.

“Paper ballots also give election officials a way to double check after Election Day that the computers counted the ballots correctly in post-election audits,” Emerson says.

She explains that a post-election audit occurs after the unofficial results are counted and before the results are certified.

“An audit will be able to provide assurance that votes were counted correctly, and if not, that the votes need to be counted again,” Emerson says. “This is really important, because our democracy relies on you showing up to vote and trusting that your vote counts.”

Why not online voting?

If you’ve ever purchased anything online, you know it’s usually quick and easy. So why not vote online too? While Internet voting might seem convenient, Emerson points out that it is actually very different from other ways we use the Internet.

“No one should ever be able to find out how you voted,” Emerson says. “With Internet voting, you would be able to trace the votes back to the person who voted through their IP address or even their email address.”

Emerson also points out that similar to online banking, shopping and other Internet transactions, there is a high risk of hacking and no reliable way to recover the data.

In what is hopefully not an omen of things to come in November, Georgia had a chaotic 2020 presidential primary when its newly-purchased voting machines broke down.

The State of Georgia spent $107 million on 30,000 new high-tech touchscreen voting machines after widespread claims of voter suppression in the state’s 2018 governor’s election. In that election, after a prolonged recount, Stacey Abrams lost to Brian Kemp by less than two percent of the vote. Making matters more problematic, Kemp was the state’s secretary of state at the time and in that position he was in charge of running the election.

Georgia’s statewide presidential primary, held on June 9, 2020, was marred by a failure of all three technological components—the electronic poll books that checked in voters, the touch-screen voting machines and the ballot scanners. All broke down, creating long lines and frustration for Georgia voters.

The coronavirus pandemic did not help matters as the state was short about 250 poll workers, but according to the American Civil Liberties Union of Georgia, the state was “ill-prepared for this year’s election” before the pandemic hit.

ACLU-GA Executive Director Andrea Young told The New York Times, “They were issuing brand-new machines on a massive scale and that’s never been done before. You need to put in more resources, more training for poll workers, for citizens.”

Marilyn Marks, a voting rights advocate with the Coalition for Good Governance, agreed and told The New York Times switching systems during a presidential election year was like “Walmart deciding that they wanted to change out their point-of-sale system on Black Friday.”

Georgia’s secretary of state blamed county officials for the voting problems, but security experts faulted human error, complex machinery, not enough poll workers and inadequate tech support. Glitches with voting machines on Election Day can be a problem for many reasons, including causing voters to leave in frustration before casting a ballot.

In Georgia, most voters stuck it out with some waiting for longer than three hours. One Georgia voter, who suffers from bronchitis and asthma and had not received the absentee ballot she requested, told The New York Times, “I refuse not to be heard and so I am standing in line.”