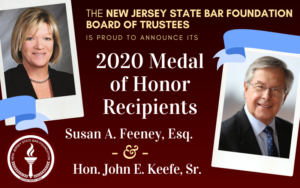 The New Jersey State Bar Foundation (NJSBF) is pleased to announce Susan A. Feeney and Judge John E. Keefe Sr. are the recipients of the 2020 Medal of Honor, its most prestigious award.

The Medal of Honor is given annually to lawyers, law-related professionals and lay people who have made a significant contribution to the advancement of New Jersey’s justice system or legal profession. The award recognizes professional excellence as demonstrated by accomplishments in the law or service to the profession and the community during their careers.

“Susan Feeney and Judge John Keefe are most deserving of the Medal of Honor. They have demonstrated a dedication and commitment to the highest standards of excellence throughout their distinguished careers,” said Norberto A. Garcia, president of the NJSBF, the charitable and educational wing of the New Jersey State Bar Association (NJSBA).

“I am deeply honored to receive the Medal of Honor from the Foundation. Throughout my career, it was important to me to find the time to give back professionally and personally. Being involved in the State Bar, mentoring women and being part of so many pro bono organizations has been my way of doing that and I am truly humbled to be recognized by the Foundation for my work,” said Feeney, a partner in the Tax and Employee Benefits group at McCarter & English in Newark.

Feeney is immediate past president of the NJSBF and was president of the NJSBA from 2011-2012. She was a trustee at both organizations, where she served on numerous committees. She is a member and former chair of the NJSBA Taxation Section’s executive council and serves on the Commission on Professionalism in the Law. Feeney is a recipient of the NJSBA Amicus Curiae Award. She is a former board member of the Essex County Bar Association. She has had a longstanding commitment to supporting women in law and been a champion of pro bono services and volunteer work to marginalized communities locally and overseas throughout her career. She is a founding member of the Legal Services Foundation of Essex County and Volunteer Lawyers for Justice. Feeney is a graduate of Seton Hall University and Fordham University School of Law.

Keefe, whose judicial career spanned nearly 25 years, said “I have spent a career in the practice and administration of law and have always tried to treat litigants and lawyers with dignity. It is truly an honor and a privilege to receive the Medal of Honor from the New Jersey State Bar Foundation and to join the company of so many past recipients whom I respect and admire.”

Keefe, of counsel at Keefe Law Firm in Red Bank, retired as a presiding judge of the appellate division of the New Jersey Superior Court in 2001. Prior to his appointment to the Middlesex County Juvenile and Domestic Relations Court in 1977, Keefe was a civil trial attorney where his practice involved medical malpractice, product liability and insurance. Shortly after becoming a judge, he was designated to manage statewide asbestos litigation, until his appointment to the appellate division. During his tenure in the Superior Court, Keefe also served on several committees and chaired the Committee on Model Civil Charges and Complex Case Management.

Keefe served as an adjunct lecturer at Seton Hall University School of Law for 15 years and has been a frequent lecturer at the New Jersey Institute for Continuing Legal Education (NJICLE), where he received its Distinguished Service Award. He received the NJSBA’s Civil Trial Bar Section’s James J. McLaughlin Award. He is a co-author of New Jersey Products Liability & Toxic Tort Law. He is a graduate of Rutgers University and Rutgers University School of Law.

The Medal of Honor Awards dinner, previously scheduled for September, has been postponed because of the COVID-19 pandemic. A new date for celebrating the awards will be announced soon.