Is Repealing Citizens United the Answer? 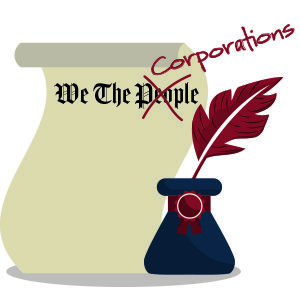 In the trailer for the documentary “Dark Money,” investigative reporter John Adams draws dollar signs on a diagram to show how money from large corporations is used to influence the outcome of elections.

“Corporation funnels money to a dark money group. They send out postcards attacking the opponent. When that candidate gets elected, they support the agenda of the corporation,” Adams says in the trailer for the 2018 film that documents his investigation of campaign financing in Montana. “I can’t pick up the phone and say, ‘Hey, what’s your interest in candidate X?’—Because I don’t know who they are.”

As the documentary points out, “dark money groups”—or political nonprofits, which are not required to reveal their donors—are not unique to Montana. Ever since 2010, when the U.S. Supreme Court ruled in Citizens United vs. the Federal Election Commission that organizations could fund advertising calling for the election or defeat of a candidate, anonymous sources on both Republican and Democrat sides have funneled money into political campaigns nationwide.

Research shows most Americans want to rein in the influence of large campaign donors. A nationwide voter survey, released in spring 2018 by the University of Maryland and the nonpartisan group Voice for the People, revealed that three-fourths of respondents (including 66 percent of Republicans and 85 percent of Democrats) support a constitutional amendment outlawing Citizens United, according to the Center for Public Integrity, a nonprofit news organization. This includes limiting the power of political action committees, called super PACs, which can accept unlimited contributions from individual or corporate donors.

So far, 19 states—New Jersey among them—have called for a 28th Amendment to the U.S. Constitution, which would repeal the Citizens United decision. Experts say this is unlikely to happen due to the complicated process of passing a constitutional amendment (two-thirds support in both the Senate and House of Representatives and ratification by three-fourths of state legislatures).

So, what is Citizens United?

The U.S. Supreme Court decision in Citizens United was framed as a free speech issue. The case involved a controversial 90-minute film about Hillary Clinton, produced by a conservative group opposing her 2008 presidential run. A lower court had ruled that federal law forbade corporations and other special interest groups from using money from their general accounts for “broadcast, cable or satellite communications” about a candidate for federal office 30 days before a primary election and 60 days before a general election.

In the majority opinion for the Court, Justice Anthony Kennedy wrote: “When government seeks to use its full power, including the criminal law, to command where a person may get his or her information or what distrusted source he or she may not hear, it uses censorship to control thought. This is unlawful. The First Amendment confirms the freedom to think for ourselves.”

As a matter of First Amendment doctrine, Citizens United is consistent with the belief that “money is politics” and we should not discriminate against the identity of the speaker, says Eugene Mazo, a professor at Rutgers Law School who teaches election and constitutional law. “I’m somebody who thinks that people should decide elections. And the problem with all this money in politics is, even though people are pulling the levers, their vote is being influenced by TV ads that are being backed by special interests.”

In 1974, the Federal Elections Campaign Act was established to limit the amount of money that individuals and corporations could contribute to a candidate. But in a 1976 case called Buckley vs. Valeo, the U.S. Supreme Court ruled that political contributions to campaigns were protected under the First Amendment, but they could be capped to prevent corruption.

“Lots of cases from 1976 until 2010 defined and redefined what was meant by corruption,” Professor Mazo says, and corporations tried to circumvent the limits in different ways. Although the limit prevented “express advocacy,” corporations might run ads about issues the candidate supported without mentioning his or her name. In 2010, the Supreme Court ruled that the First Amendment’s free speech provision could not discriminate against the identity of a particular speaker—such as a corporation.

“What Citizens United did is it allowed corporations to spend money as independent expenditures,” Professor Mazo says. “So, if my friend is running for Congress, I can give him $2,700 [the donation limit] or I could just not talk to him [because a candidate cannot have contact with his or her super PAC] and I can go spend millions running ads to support him.”

Across the country, momentum is building for a so-called 28th Amendment that would repeal Citizens United. But what would that amendment look like?

In a forthcoming book titled Democracy by the People: Reforming Campaign Finance in America, which is co-edited by Professor Mazo, Ronald Fein writes that the amendment “would establish political equality as a legitimate public goal for campaign finance reforms, and allow federal, state, and local governments to set limits on fundraising and spending in elections.” Fein, legal director of Free Speech for People, a national nonpartisan organization dedicated to advocating for the 28th amendment, wrote a chapter in the book titled “Fixing the Supreme Court’s Mistake: The Case for the Twenty-Eighth Amendment.”

“The first key question is whether the amendment should focus only on money in politics, or address other issues as well,” Fein writes. “The Citizens United case brought together two sets of issues: campaign finance, and the constitutional status of corporations… Of those who support both goals, some argue that both must be accomplished in a single amendment, while others believe that passing an amendment on campaign finance alone will be more expedient than passing a combined amendment, and may indeed accelerate passage and ratification of a later corporate rights amendment.”

The question of free speech

Not everyone supports repealing Citizens United. The American Civil Liberties Union, for instance, would not support any measure that could be interpreted as “banning political speech.”

“Despite the bombastic rhetoric and dire predictions, corporations and their vast treasuries have not dominated elections post-Citizens United,” Eric Peterson, then-senior policy analyst at Americans for Prosperity, a right-wing political advocacy group, wrote in a Washington Examiner op-ed piece. “While the New York Times or other media outlets would be quick to point out that the First Amendment specifically mentions freedom of the press, the lines between corporations have always been and continue to be blurred.”

Meanwhile, Nicholas Almendares, a professor at Seton Hall Law School, proposes “a downstream approach,” which focuses on mitigating the effects of the Citizens United decision, rather than its repeal.

In a 2016 article titled “Beyond Citizens United,” published in Fordham Law Review, Professor Almendares and co-author Catherine Hafer, a professor at New York University argue in the article’s introduction, “Citizens United leaves open the possibility of managing the pernicious effects of money in politics… While conventional campaign finance regulation tries to mute the policy influence of money by reducing the amount used in campaigns, the approach we advocate here focuses on the policymaking process that follows the election. Because our ‘downstream’ approach to these issues entails no restriction on political speech, it is permissible under Citizens United.”

So far, efforts to either repeal Citizens United or pass an amendment to the U.S. Constitution outlawing it have failed.

Glossary Words
nonpartisan: no adhering to any established political group or party.
pernicious: having a harmful effect in a gradual or subtle way.
repeal: revoke or terminate a law or congressional act.
rhetoric: language designed to have a persuasive or impressive effect on its audience, but often regarded as lacking in sincerity or meaningful content.

This article first appeared in the fall 2018 Special Voting Edition of The Legal Eagle. It has been updated as of May 2020.