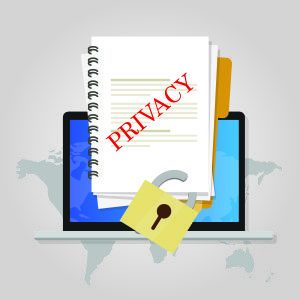 Privacy is often defined as a person’s right to control his or her personal information. You probably voluntarily spend much of your day on your smart phone, texting, posting pictures, announcing where you are and where you’re going. You may also wear exercise-tracking devices that collect your personal data.

Your movements are recorded in stores, restaurants, clubs and on public streets. If you are suspected of a crime, these digital devices can be used to track your every move and access your confidential data.

Privacy issues involve the Fourth Amendment which states: “The right of the people to be secure in their houses, papers and effects, against unreasonable searches and seizures, shall not be violated, and no Warrants shall issue, but upon probable cause… particularly describing the place to be searched and the persons or things to be seized.”

The third-party doctrine also deals with privacy. The doctrine, which dates back to the 1970s, states that if you voluntarily give information to a third party, like the phone company, banks or Internet service providers, you do not have a reasonable expectation of privacy.

A decision for the digital era

In Carpenter v. United States, extensive cell phone records (127 days worth) from Timothy Carpenter revealed that he was at or nearby several armed robberies of Radio Shack and other stores in the Detroit metropolitan area. This evidence, as well as other testimony, was used to convict Carpenter and he was sentenced to 116 years in prison. The case made its way to the U.S. Supreme Court in June 2018. The majority of the Court, in a 5-4 decision, ruled in Carpenter’s favor.

The government, arguing before the Court, based its argument to uphold Carpenter’s conviction on the third-party doctrine. “In its [the government’s] view, cell-site records are fair game because they are ‘business records’ created and maintained by the wireless carriers,” wrote Chief Justice John Roberts for the majority. “The Government’s position fails to contend with the seismic shifts in digital technology…[and] fails to appreciate that there are no comparable limitations on the revealing nature of CSLI [cell phone location tracking].”

Chief Justice Roberts explained that the case was not about a person’s location at a particular time, but “about a detailed chronicle of a person’s physical presence every day, every moment,” raising serious privacy concerns. In the majority opinion, Chief Justice Roberts noted that the Government essentially “conducted a search” which required a warrant for probable cause. Instead of a warrant, the police obtained a court order stating the records were relevant to their investigation. The Court ruled the prosecutors violated Carpenter’s Fourth Amendment rights by collecting extensive amounts of data without a warrant.

“We decline to grant the state unrestricted access to a wireless carrier’s database of physical location information,” Chief Justice Roberts wrote. “The fact that such information is gathered by a third party does not make it any less deserving of Fourth Amendment protection. The Government’s acquisition of the cell-site records here was a search under that Amendment.” Therefore, in this particular case, the Court ruled the third party doctrine did not apply, reversed the conviction and returned the case to the lower court.

While Carpenter was successful at the Supreme Court, he did not fare so well when the lower court took another look at his case. The U.S. Court of Appeals for the Sixth Circuit found that while government agents may have violated the Fourth Amendment when they obtained Carpenter’s location data without a warrant, they still acted reasonably and in “good faith.” Therefore, the lower court still allowed the prosecution to use the data at trial. As a result, Carpenter was convicted again and will spend the rest of his life in prison.

Alexa, was it murder?

Technology has changed evidence collection in criminal cases. In Arkansas, for instance, access to an Alexa Echo became an issue. In February 2016, prosecutors brought first-degree murder charges against James Bates after a friend, who had slept over at his home in November 2015, was found dead the next morning. Bates discovered the body and claimed it was a tragic accident.

In the course of their investigation, the police seized an Amazon Echo from Bates’ kitchen. At first, Amazon refused to release customer information collected from the Echo, but Bates agreed to hand over the data voluntarily. As it turned out, nothing of value was found on the Echo. But police also discovered that a “smart” water meter recorded the use of an abnormally large amount of water in the early morning hours, suggesting the possibility that a crime scene had been cleaned up. The prosecutors ultimately dismissed the case, declaring that the evidence could support more than one reasonable explanation.

In another first-degree murder case, this time in Connecticut, a Fitbit exercise tracker became a crucial piece of evidence, recording the movements of murder victim Connie Dabate. According to Dabate’s husband Richard, on December 23, 2015 a masked intruder shot Connie at 9 a.m. in their basement. Her Facebook account showed she had posted three videos that day at 9:46 a.m. The police obtained a warrant for Connie’s Fitbit, which showed her last recorded movement was at 10:05 a.m. Richard Dabate’s call to 911 was recorded at 10:10 a.m. Dabate’s trial was set to begin in March 2020, but jury selection was suspended due to the coronavirus.

“The third party doctrine says you only have an expectation of privacy in information you do not share with a third party,” Bernard Bell, a professor at Rutgers Law School—Newark, who is a constitutional law expert specializing in privacy law. “Scholars have long noted that this unduly limits privacy protections and is at odds with the perceptions of privacy prevalent in society.”

Professor Bell notes that “a person cannot do very much in today’s society without sharing information with service providers” and says that, as in the Carpenter case, the Supreme Court has begun to question the third party doctrine. He predicts that the doctrine “will be modified or abandoned altogether.”

“Police technology could be used to keep persons of interest under government surveillance at all times. [In Carpenter] the Court is finding there is an expectation of privacy even when people are in public,” Professor Bell explains and notes that putting a GPS on a person’s car requires a warrant, “even if the device is simply tracking the car while it is driven and parked on public streets.”

Professor Bell says the key to privacy “enforceable against law enforcement officers is the Fourth Amendment” and its requirement for a warrant based on probable cause.

“With such a warrant, the Government can conduct just about any search be it a physical one, like searches of homes and paper records, or a digital one,” Professor Bell says. “Privacy is certainly a civil right and essential to self-development and freedom.”

As technology advances, it is likely the courts will continue to address questions of privacy, keeping pace with the digital age in which we live.

Glossary Words
majority opinion: a statement written by a judge or justice that reflects the opinion reached by the majority of his or her colleagues.
reverse: to void or change decision by a lower court.
uphold: supported; kept the same.
warrant: a document that authorizes the police to conduct a search.

This article first appeared in spring 2019 edition of The Legal Eagle. It has been updated as of May 2020.