Governing During a Pandemic: Who Has the Power? 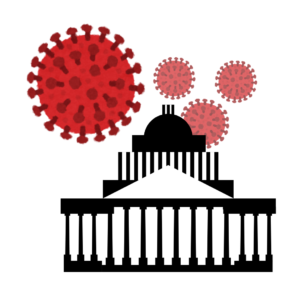 These are uncertain times, what with having to wear a mask when you’re outside and being stuck at home. At this point, you might even miss attending school in person.

One thing to remember is that the United States has been through this before. Our country has dealt with outbreaks of diseases, epidemics and pandemics throughout its history and the coronavirus, also known as COVID-19, will be no different.

So, what’s the difference between an epidemic and a pandemic? Essentially, a pandemic is just an epidemic that travels. For example, the World Health Organization (WHO) determined that COVID-19 began in Wuhan, China, with the first case reported on December 31, 2019 (that’s why it’s called COVID-19 because it started in 2019). If the disease had stayed in China, it would have remained classified as an epidemic. By March 11, 2020, the disease had spread to 114 countries and WHO declared it a pandemic.

Playing Your Part at a Distance

During a pandemic, or any national crisis, everyone has a part to play. For most of us that part is staying at home and practicing social distancing.

Social distancing, also known as physical distancing, is not a new concept and actually dates back to the Fifth Century. Over the centuries, the practice remained the norm when dealing with infectious diseases. In 1666, for instance, King Charles II ordered a stop to all public gatherings, including funerals, in an effort to curb the spread of the bubonic plague. While the king probably didn’t refer to his order as social distancing, that’s what it was.

The Centers for Disease Control and Prevention (CDC) defines social distancing as “keeping space between yourself and other people outside of your home.” That means not gathering in groups, avoiding crowded places as much as possible, and when you do need to go out, keeping at least six feet from another person. The CDC stresses that it is important to stay away from people even if you are not showing symptoms, since people can spread the virus before they know they are sick.

To illustrate the importance of social distancing, a laboratory, affiliated with the University of Massachusetts Amherst, outlined a formula for how many people a sick person could infect. For starters, scientists measure the intensity of an infectious disease by its reproduction number. For COVID-19 that number is 2.5, meaning that a person infected with the disease can infect 2.5 people over five days, which is the time it takes for an infected person to show signs of the disease. The estimation is that in 30 days, the number of infected people has jumped to 406. That is because those 2.5 people infected by, lets call it person #1, have each infected 2.5 more people and the number balloons from there.

During the 1918 flu pandemic, the city of St. Louis implemented social distancing measures, including closing schools and banning public gatherings. Philadelphia and Boston, on the other hand, despite the risk of spreading the disease, held military parades. As a result, the fatality rate in St. Louis was much less than in Philadelphia and Boston. In addition, a town in Colorado isolated itself for two months against the 1918 pandemic, cutting off highways and requiring those arriving on train to quarantine for five days. As a result, the town had no influenza deaths.

Power of the Federal Government

While you’re doing your part, the government is also doing theirs. On the federal level, the Executive Branch (President) and the Legislative Branch (Congress) sort of work in tandem at times like these. For instance, the President has the authority to send medical equipment to states in need but only because Congress, specifically the House of Representatives, has appropriated the money since they have the “power of the purse” and also control interstate commerce.

The President does have a few tools in his arsenal in times of crisis. The Defense Production Act of 1950 (DPA), enacted in response to the Korean War, gives presidents the authority to order businesses to prioritize contracts for materials necessary for national defense. This means that the President can put the government at the head of the line, regardless of an incurred loss to the business.

So, the President can, for example, order General Motors to stop making cars and start making ventilators. During the COVID-19 crisis, President Donald Trump invoked the DPA in April 2020 to require companies like 3M and General Electric to increase production of protective masks for healthcare workers and also used the provision to address the nation’s food supply, mandating that plants producing beef, pork, poultry and eggs stay open.

Another power that presidents have is the declaration of a national emergency. On March 13, 2020, President Trump declared a national emergency under the Stafford Act, a law that presidents have used to declare disaster areas after tornados, hurricanes, floods or other natural disasters. The Stafford Act has also been invoked after the 9/11 terrorist attacks and the 2013 Boston Marathon bombing. In addition, President Bill Clinton used it during the outbreak of the West Nile virus and President Barrack Obama used it in response to the H1N1 pandemic in 2009.

By declaring a national emergency, presidents can tap into emergency funds totaling upwards of $40 billion, again appropriated by Congress, which can be used to buy medical supplies and equipment for the states. The declaration also means that the Federal Emergency Management Agency (FEMA) is freed to coordinate its response to the emergency.

Comes Down to the States

During a health crisis, the power to pass laws related to public health actually rests with state and local governments, not the federal government, according to Lata Nott, a fellow at the Freedom Forum in Washington, DC, and an attorney specializing in First Amendment issues. The CDC provides nonbinding guidance to the 2,684 state, local and tribal public health departments, but the states are not obligated to adhere to those guidelines.

“Mayors and governors get the power to pass laws like this from the 10th Amendment, which basically says that all powers not granted to the federal government by the Constitution are reserved for the states and the people,” says Nott. “Because of this, states—and by extension cities and counties—have what are commonly known as ‘police powers,’ which means they can pass laws to protect the health and safety of their citizens.”

You may have noticed that what is considered an essential service or business varies depending on what state you’re talking about. The Department of Homeland Security provides guidance on what businesses and workers are considered essential, but Nott says it’s ultimately up to individual cities and states to determine what’s essential because those needs could vary depending on a particular location.

Nott also says that some of the decisions made by cities and states may be subject to constitutional scrutiny. For example, some states consider church as an essential business and allowed congregations to gather in large numbers despite social distancing guidelines. Nott says designating church as an essential business or service violates the establishment clause of the First Amendment, which requires government to treat secular and religious organizations equally.

Lawsuits have been filed by churches and religious organizations against half a dozen states that are restricting religious gatherings, including one against New Jersey brought by a priest in North Caldwell. The suits claim that the restrictions violate their First Amendment right to freely exercise their religion.

In a blog post for Freedom Forum, written by Nott, she quoted Rachel Laser, president of Americans United for Separation of Church and State, who said, “When health experts and public officials determine that large gatherings must be cancelled for the public good, we must follow their lead and apply these guidelines to secular and religious gatherings equally. The Constitution not only permits it, but demands it. Such restrictions do not violate religious freedom; they ensure religious freedom is not misused in ways that risk people’s lives.”

In China, its leaders put much of the country on lockdown and forcibly removed those infected to isolation centers. The leader of India, which has a population of 1.3 billion people, ordered a 21-day lockdown of the entire country. According to Nott, that would probably not happen in the U.S.

The federal government can also put restrictions on people coming into the country. For instance, in January 2020, the Trump Administration announced that it was restricting people coming into the country from China, with the exception of U.S. citizens, who would be quarantined for a period of 14 days. Nott says she doesn’t think the commerce clause “would extend to being able to order a nationwide stay-at-home order.”

What About Civil Liberties?

A civil liberty is a guarantee from government to not limit freedoms such as speech, assembly or action. In times of crisis, such as a pandemic, government typically has the power to limit civil liberties in certain circumstances.

“Civil liberties are not unlimited and have to be balanced with public health and safety,” Nott says. “But history shows that governments often use crises to deny people civil liberties on a longer term basis. So I think that people should respect these guidelines at this moment in time, but be watchful and vigilant and make sure to hold government officials accountable if they go too far.”

Nott says it’s important to understand that laws that infringe on civil liberties are only constitutional if government officials can demonstrate “a compelling purpose” behind them. In addition, government needs to show that these laws are the “least restrictive” option available to fulfill that purpose.

In the case of the statewide stay-at-home orders, the compelling purpose is protecting public health. Nott believes at this moment the orders are probably the least restrictive option available to most governments to ensure public health. She also notes, however, that the analysis of what is “least restrictive” will change as the situation of the pandemic changes.

Glossary Words:
epidemic: outbreak of a disease that affects a wide geographic area and a high proportion of the population.
outbreak: a sudden increase in the number of cases of a disease above what is normally expected in a limited geographic area.
pandemic: an epidemic that has spread and now affects multiple countries or continents.
secular: denotes activities that have no religious or spiritual basis.